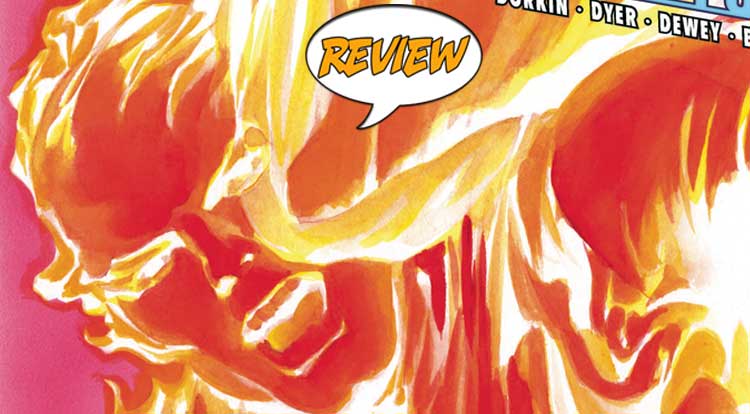 Previously in Fantastic Four: Marvels Snapshots:  It’s the tale of the ten-year high-school reunion of the Fantastic Four’s own Human Torch.  His hometown of Glenville, Long Island is going wild, but there’s a strange distance between Johnny Storm and his old schoolmates, one of which reporter Marcia Hardesty intends to get to the bottom!

We open with a newscast, referencing a number of events that took place in Marvel Comics circa 2002, such as the ‘Red Zone’ incident and the latest exploits of the X-Statix, as Dorrie Evans, once the Human Torch’s girlfriend, prepares for her ten year high school reunion. Dorrie is quickly joined by a reporter and a cameraman who are covering the event and want to interview her. Dorrie has mostly positive things to say about her ex, Johnny, but also points out that he hasn’t been around much after graduating high school. The same comes from the people of Glenville, including the owner/operator of a museum to Johnny and Susan Storm, the biggest local celebrities, and even a couple of minor villains who fought him in the old days. “My god…”, says the former Asbestos Man, “I challenged a sixteen-year-old boy to a fight.” When The Human Torch finally arrives, there are many out-of-town fans and much media coverage, but the people of Glenville seem to be less-than-thrilled with their hometown hero. Eventually, Marcia and her cameraman follow the locals down to the beach, where they’ve all assembled after the party broke up, waiting…

BUT SOMETIMES, YOU DON’T HAVE TO

The ending is wonderful, though, putting the perfect cap on this issue’s story and balancing the “idol of millions” and battler-of-Galactus with the hometown kid from Glenville, and I have to say, it works really well. (The fact that there’s just a little bit of Chris Evans’ Torch in his facial features actually helps a bit.) Ben Dewey does a wonderful job on the art, especially given that much of the issue is devoted to interviews and people talking back-and-forth, with only one super-powered moment (and maybe an appearance by a particular Inhuman) to deliver the usual big-screen super-stuff one might expect. Add in a truly wonderful, subtle coloring job by Jordie Bellaire, and you’ve got a really nice look into the world of a character who sometimes doesn’t get a lot of depth to his characterization. I was a little bit bothered by the price point, but it does have extra pages compared to the average 20-page comic.

If you are a fan of ‘Marvel’s or ‘Astro City’ and want to see more of that take aimed at Marvel’s first family, Fantastic Four: Marvels Snapshots #1 is the book for you, with lovely art, a well-crafted story and some stand-out coloring combining for a truly touching look behind the flaming curtain and 4.5 out of 5 stars overall. It’s always nice when the bombastic characters are shown to have real emotions and depth, making this extra-sized issue worth the slightly larger price tag.

Once again, we cut to the 'Marvels'-style heart of the story, and it's a really wonderful journey.