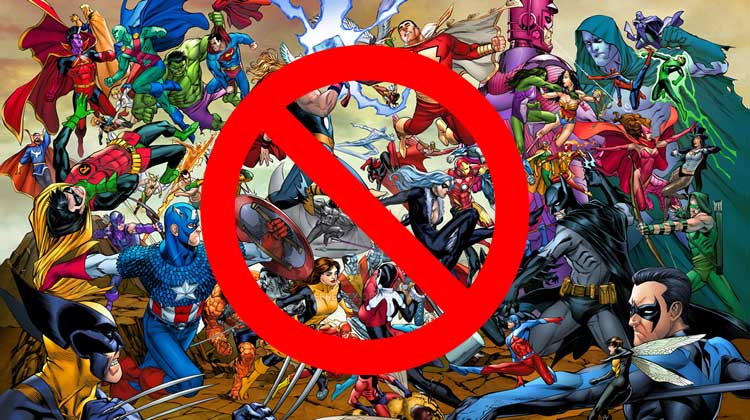 What I dreaded most has now happened! There will be no new paper comics this week! Worse than that, my local comics shop is closed for at least two weeks, so I can’t even go there on Wednesday!

What’s a comics fan to do? Talk with each other? Nahhhhh!

FIRST DIAMOND CLOSED, THEN MY LCS Last Monday, only a few hours after my previous column posted, word hit that Diamond Distributors had shut down for the foreseeable future. Not long after that, the comics shop I weekly frequent had to close its doors due to local regulations.

There’s been quite a lot of discussion in the comics community about all this. With many LCS’s down for the count now that the comics companies were shuttered, everyone is scrambling, trying to figure out what to do next.

The good news is that people apparently are NOT shutting down for good. My LCS, Krum’s World in Winter Garden, Florida, is already making plans for when they reopen, hopefully in less than two weeks, but we’ll see. Like many shops, they’ve been asking for community support, and they’ve been getting a good response. Check the store you go to, probably best at their website, to see what you can do to help!

What’s encouraged me the most is hearing that DC is likely going to release new material digitally this Wednesday. Otherwise, it’ll be the first bleak week of many for this habitual comics reader! Again, we probably shouldn’t get too excited until that happens!

The weirdest thing that happened, though, was the release of the latest Diamond Previews book this past Wednesday. We can’t place orders through it, so is it a collector’s item? I bought it so I could look through it and to support my LCS, but it’s just a mantle piece harkening back to days gone by for now.

I remember standing in the store on Wednesday with a weird feeling that it would be a while before I would be there again. That is SO strange for me!

Since last week, I’ve gotten a lot of work done, things I can do to make a little money. That includes proofreading and such. But the county I live in has issued orders that people my age and older shouldn’t be out and about for now. I can’t even go to my little part-time job at a nearby paper!

I have been catching up with some friends via social media, among other things. I’ve also been trying to figure out what to write about in the weeks ahead if the industry remains paralyzed for now. “Free time” has been a concept foreign to me, so I’m trying to get used to it for the moment. However, I know others will soon realize I could be doing things for them, so it won’t be here long! Thank goodness the Internet is still working!

WHEN THE INDUSTRY REVS UP AGAIN Some things I’ve been reading about have fascinated me. It appears that DC and other companies are working on getting the product they’ve already printed into fans’ hands by other means since Diamond is currently out of the picture. If they come across ways that work for them once this event is over—and it WILL be over eventually—that could change the industry significantly.

Does that mean all the comics companies will be back? I’m not sure about that. Some may see this as an opportunity to cut their losses and leave comic creation behind. I hope not, though! It all depends how much they love making comics, though.

My LCS is sprucing up their location during their down time. I’m sure they’re not alone in making this period of time a chance to get things done they’ve wanted to make happen but just haven’t had the time for until now.

Some fans are hoping Marvel and DC will make crossover comics again in an attempt to revive interest. I like that idea, including the suggested image just above by Dustin Nguyen!

The thing is, when the industry starts getting back to normal, it’ll take some time for the process to kick into gear. It’s an involved one, you know. Orders have to be sent in to Diamond, then the Previews has to be printed and distributed.  The stores have to look over the “phone book,” as I like to call it, then submit their orders. Then it takes two months before the shops actually get the stuff they’ve asked for (it all has to be printed and such). Granted, it doesn’t take long for it to hit the shelves after that, but you can see how it may be Autumn before we’re anywhere near where we were before. And that’s if things resolve rather quickly, not a sure thing at all!

WHAT CAN WE DO UNTIL THEN? While many LCS’s are shut down, there are still some that remain open. If you can, go buy stuff from them so they can keep it up! As I previously mentioned, if your LCS needs help, by all means, support them as best you can so they can return as soon as possible. Many have crowdfunding events going on to make that happen, so find out how best to do that.

I’m trying to get caught up on my reading right now as well. Real life just gets in the way of comics sometimes! If you’re behind like me, use any spare time to dive into the books you’ve been waiting to get into!

Thankfully, the Internet is still open, and websites like MajorSpoilers.com are keeping fandoms informed regarding developments in the industry. Find out what’s happening as best you can so we’ll have less time catching up when things start to move forward again.

Kickstarter projects continue on, and you just might find some great comics there! I recommend you check them out!

And as I said last week, be sure to stay healthy and keep reading your comics!

What do you think? What will the comics industry be like when it returns? Will your LCS be back? If not, what other shops will you check out? Are you helping your LCS keep going now? If so, how? Please share your thoughts in the space below!