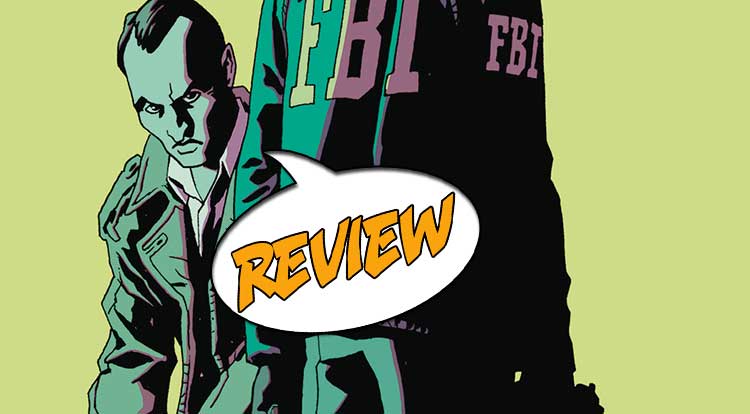 In THE OLD GUARD – FORCE MULTIPLIED #4 from Image Comics, former lovers Andromache and Norika renew acquaintances, while Copely justifies his exposure of the immortals to two of them, Nicky and Joe.  And Nile, a newly minted immortal, struggles to come to terms with her ‘gift.’  Who will win and who will (sort of) die? Find out in your latest Major Spoilers review! Previously in THE OLD GUARD – FORCE MULTIPLIED: In all the long history of humanity, there have only been five immortals.  And now with the discovery of Nile, there are six.  For millennia, they have lived their lives free of scrutiny, fighting and loving their way unmolested across the centuries.  But the return of one of them, an embittered Norika, and their unmasking by CIA operative Copley, has thrown a massive spanner in the works…

GIVE HIM THE PRIZE

Oh dear.  Another contender for best single issue of a comic for 2020.

THE OLD GUARD – FORCE MULTIPLIED #4 (there’s a mouthful!) skilfully blends action and mystery with a deeply thought out consideration of what it means to be immortal.  Greg Rucka has created a finely wrought cast of disparate characters, all a blend of good and bad, and meditates on what one would do, or indeed, should do, given the blessing and curse of immortality.

THE OLD GUARD – FORCE MULTIPLIED #4 opens with Noriko meditating on what it’s like to be immortal, for centuries, alone with it, while everyone around you, those you love and hate, die with the passing of the seasons.  For Noriko, at least in the beginning, she used her gift for good, to protect those near and dear, to impress meaning on a meaningless world.  Those opening pages are a pagan’s delight, full of violence and rapine, worship of unknown gods.  If Rucka and  artist Leandro Fernandez are even given the job of working on a Conan title, hold onto your hats guys, because it will be brilliant.

Of course, while Noriko is narrating her past to Andromache, Nicky and Joe brace Copley, who set all the immortals up in the opening issue.  Copley is the sort of guy who has a corkboard in the basement, plastered with reports and photos, with so many pins and so much red yarn.  But unlike all the other crazies out there, Copley was right – the evidence of immortals was all around us, but only he had the vision to recognise them for what they are.  Nicky and Joe aren’t thrilled about being unmasked – you can imagine all sorts of horrors any government would inflict on them to learn what it is that makes them immortal.  But then he makes them an offer.

The writing in THE OLD GUARD – FORCE MULTIPLIED #4 is peerless.  Rucka is a master of his craft, with a keen ear for nuanced dialogue, and an ability to convey information and emotion in an efficient manner.  Everyone in this issue – Noriko, Andromache, Copley, Nicky, Joe and Nile come across as fully fleshed individuals.  There’s nothing cookie-cutter about their hopes and desires – they feel like actual people.  Rucka’s approach means that there’s always a keen interest in what happens next, what the characters might do, and the ramifications of their actions.  It is a wonderful example of writing in the comic’s genre.

The art in THE OLD GUARD – FORCE MULTIPLIED #4 is outstanding.  Leandro Fernandez’s inking is impeccable.  The way he uses light and shadow to convey mood, especially during the meeting between Nicky, Joe and Copley, is worth noting.  His versatility is also worth praising.  The first half of THE OLD GUARD – FORCE MULTIPLIED #4 is basically Conan without the lumbering barbarian.  The battle scenes are a chaos of whirling bodies and bloody death.  The exoticness of the setting, conveyed through dress, wall hangings and the sensuousness of the characters, really sets this issue apart.  It’s all the thrill of pulpy action with a dash of a thinking man’s Red Sonja.

When Fernandez makes the switch to the modern day, his art and the coloring by Daniel Miwa conveys the sterility of the concrete canyons of modern society.  The reds and oranges of the early half of this issue dissolve into grays and blues, as Noriko and Andromache verbally spar during their reunion.   Overall, the artwork is spellbinding, working with the writing to create the complete reading experience.

A strong entry for best solo issue of 2020, THE OLD GUARD – FORCE MULTIPLIED #4 on its own would make for a complete story.  There are great character moments, as when Noriko explains what it was like to drown over and over, caught beneath the water.  There’s action and adventure, the sort that puts to shame some big budget action movies.  And there’s horror, as Noriko reveals who she becomes, and consigns Andromache to a fate that will have the reader shaking their head at in terror.

An action packed issue that opens with a bang and leaves you pondering how badly being an immortal can go wrong, THE OLD GUARD – FORCE MULTIPLIED #4 is a brilliant fusion of a writer in top form, and an art team who can do no wrong. If you haven’t already bought it by now, what are you waiting for?