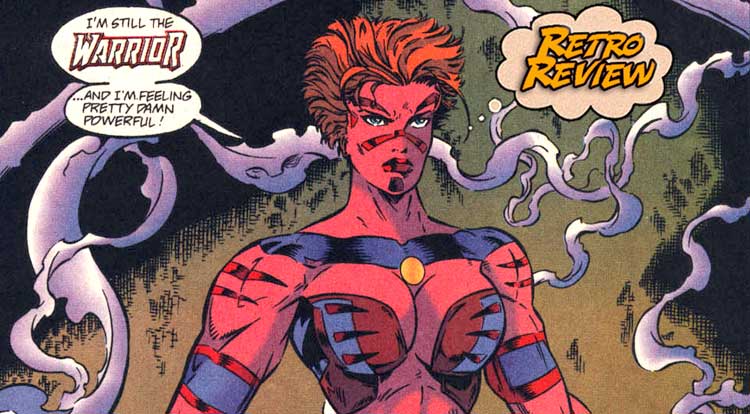 Of all the comics ever made, this book…  is one of them.  Your Major Spoilers (Retro) Review of Guy Gardner: Warrior #42 awaits! Previously in Guy Gardner: Warrior:  After quitting the Green Lantern Corps on a bet, Guy Gardner stole the Yellow Lantern ring of the then-deceased Sinestro and continued superheroing without an alias.  There were problems with that ring, eventually leading Guy to don a stupid-looking suit of exoskeletal armor and dubbing himself The Warrior.  After nearly dying in battle with Hal Jordan, who had destroyed the Oan central power battery, Guy went on a vision quest of sorts, leading to the reveal that he was secretly half-alien and had shape-shifting powers.  (Write that down.  It’ll be important later.)

Then, one morning, this happened… For those wondering, issue #41 of this book is a vaguely amusing story about Guy Gardner being adapted for a kid’s cartoon, with no setup for this narrative.  Nonetheless, Guy wakes up in the body of a woman thanks to Dementor, one of his villains of the era, who left him a letter addresing him as “Gal” and, in the most sexist terms possible in a general audiences comic, tells Guy that to get her normal form back, she must find him at… a fashion show.   For her part, Guy is not amused, and transforms into her super-form (which is awful for a number of reasons, not the least of which being that his then-current costume is essentially topless except for some strange tribal markings/tattoos) and sets out for revenge.  Smashing her way into the LaVour Fashion Show, Guy snarls that Dementor has finally pushed her too far! Even though he’s a murderous deep-purple freako from the great beyond, Dementor is also a first-class jackass and misogynist, expressing in crude tones his amusement at Guy’s predicament.  This book came out in the midst of the Bad Girl Comics boom, and while it seems like the creators might have intended to mock that movement, the sexism of this story is even more heinous than the worst of the lot.  They don’t even have the benefit of attractive art, as we see when Dementor executes his masterstroke: Making Guy model sexy outfits for him. That entire sequence is awful, from the art to the dialogue to the fact that Guy’s body proportions are ever-changing.  It’s an all-around cringe-fest, made even more facepalm-worthy when the motive for Dementor’s actions is made clear: Guy’s current girlfriend, Martika, is a mind-controlling monster from whom Dementor was trying to protect him.  Apparently, her powers don’t work on people whose body is currently female, or something, but since Demtentor himself is apparently male, it…   I dunno, Faithful Spoilerites, it’s just SO.  DUMB. You’d think that the problem of being shapeshifted into a different form wouldn’t be a problem for someone WHOSE POWER IS SHAPESHIFTING, but there ya go.  The art here is truly impressive in how well it turns things that might have been sexy into terrifying hororshows, especially Martika’s terrifying face as she realizes that the “bond” that Guy has with jungle girl Veronna protects him from her mental powers, leaving us with a big cliffhanger… …she has control of The Warrior’s worst enemies!  Guy Gardner: Warrior #42 is more than just a dumb 90s comic, it’s a truly sexist, offensive mess, made of equal parts testosterone, bad dialogue and boneheadedness, barely earning 1 out of 5 stars overall.  It’s a symphony of bad art, muddy coloring and just plain bad writing, and unlike many of our Retro Reviews, wherein there’s amusement to be found in a comic’s ineptness, this one has no redeeming qualities whatsoever.

It should come as no surprise that this book was cancelled only two issues later.

If you see this comic in the wild, run far and run fast, Faithful Spoilerites. It's not even worth buying ironically out of a quarter bin.