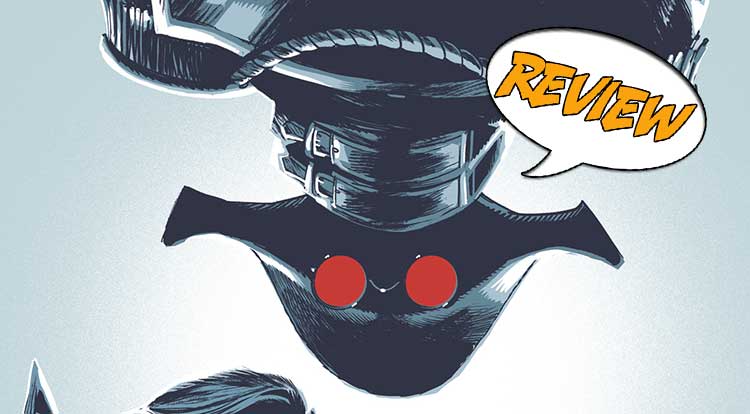 In Hidden Society #2 from Dark Horse Comics, Ulloo has assembled his team of unlikely magician heroes to face off against the Siblings of Nihil, when the cursed bounty hunter, Mercy, breaks in on their meeting.  A sudden trip to Italy and the rumbling of Mount Etna follows, along with an encounter with the Siblings.  Will Ulloo’s misfit magicians magic miracle from mayhem?  Find out in your latest Major Spoilers review! Previously in HIDDEN SOCIETY:  in days of yore, the accidental awakening of a primal force known as the Great Fire almost scorched all life from the Earth.  The magicians of that day formed the Hidden Society, dedicated to ensuring that disaster would never happen.  The rise of a trio of nihilist warlocks threatens that balance, so the last of the old magicians, Ulloo, forms a team of magic wielders.  Now all they have to do is deal with an undead bounty hunter…

WITH A WAVE OF MY WAND

I usually start talking about the story, so let’s mix things up by talking about the art.  I really enjoyed Rafael Albuquerque’s art in this issue, which when matched with Marcelo Costa’s lush coloring, makes for a captivating visual experience.   Hidden Society #2 opens with some very fine artwork, as Ulloo provides a flashback to the ancient days, when curious magicians accidentally unleashed a holocaust upon the Earth in the form of an entity known as the Great Fire.  Stark imagery of magicians outlined in red and orange, and the devastation shown in buildings on fire, demonstrate the ability of art to tell a story, absent any words or dialogue.

Later, we see Albuquerque demonstrate some good old-fashioned European inspired gothic, when we see one of the Siblings drain the minds of some of Ulloo’s peers – the panel where the stricken magicians flail and grimace is a delightful piece of ghoulish art, which will linger long in the memory.  Similarly, one of the finest moments in this issue is the panel where the magician known as Laura takes off her glasses, allowing her a glimpse into the Occult Realm.  The real world fades away, replaced with a vision of energy given form and life.  The bounty hunter, Mercy, possessed by a demon, is revealed in all her demonic glory, a satanic vision that leers out at the reader.  In imagery like this Costa’s coloring really comes into its own – indeed, Hidden Society #2 really is a masterclass in how light and shade and coloring can come together to bring static images on a page to life.

Rafael Scavone’s script is good without breaking out of the norm.  Hidden Society #2 is good as a further introduction to the characters, the introduction proper of Mercy, and a demonstration of what some of the magicians in Ulloo’s circle can do.  A key flashback sets up the menace in an efficient manner, and later, as Scavone transports his heroes to Italy and further danger.

In terms of characters, while not all of them have much to do, those that do come to the fore are memorable and well sketched out.  Scavone gives Ulloo the ‘Gandalf’ role, that of the wise, experienced wizard forced to wrangle a motley crew of characters with differing motivations and desires.  He sucks up a lot of the attention in this issue, though Mercy comes next in terms of being an interesting character.  Though, that said, moody characters with a hidden secret tend to be a dime a dozen these days, so the jury is out on how effective Mercy as a character will be.

Overall, though, Scavone has created a world with an interesting backstory, and some stand out characters – Orcus the blue furred imp/demon is a case in point. Visually interesting to look at, with a nice, snarky personality set against his devotion to his blind mistress, Laura.

Hidden Society #2 is a bit of a placeholder, which in one sense might be a bit of a worry so early in the series.  That said, the characters are well defined, the art and coloring phenomenal, and the villains, though sparsely sprinkled through the story, are certainly well defined and menacing to boot.

An enjoyable follow up to the opening issue, with plenty of efficiently told world building and some boisterous action. A crowd pleaser, for sure, but Hidden Society #2 isn’t necessarily a story built to break the mold of similar tales.