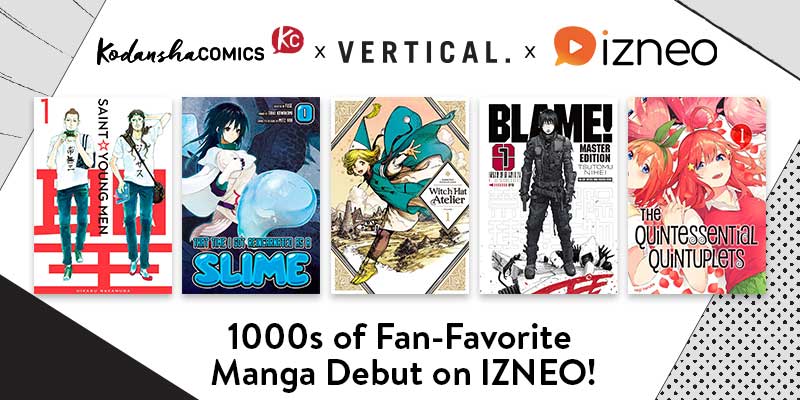 Today Kodansha USA Publishing, purveyors of some of the world’s most recognized manga properties, and izneo, a global online comics platform offering Comic books, European Comics, Mangas and Webtoons, announced a new partnership to distribute Kodansha Comics & VERTICAL’s digital manga catalog of over 2000 English language titles. Now new and long-time manga fans will be able to read such hit series as like Attack on Titan, The Ghost in the Shell, Pretty Guardian Sailor Moon Eternal Edition, FAIRY TAIL, Fire Force, The Quintessential Quintuplets, and more, all from their Android devices, Nintendo Switch and on the web at www.izneo.com/en/! This launching Kodansha library will be available on izneo’s iOS app in the coming months.

As part of this launch, izneo will also participate in Kodansha USA Publishing’s special promotion pricing 270 volume 1s at 99¢. This way, izneo readers can easily sample and start reading hundreds of Kodansha Comics & VERTICAL manga safely from the comfort of their own home at a great price.

“We couldn’t be more excited to share our vast digital manga library with izneo’s audience and help forge new life-long manga fans,” said Alvin Lu, Kodansha USA Publishing President and CEO. “For years we’ve been working hard to build a strong digital business for Kodansha content in order to make it as easy as possible for anyone to start reading manga. And now very happy to have izneo help us with that mission.”

“izneo is delighted and proud to welcome one of the most prestigious manga catalogues in the world. The amazing series published by Kodansha USA Publishing will allow us to reach new English-language digital comics readers on the many screens we are deploying our offer,” said Luc Bourcier, izneo Chief Operating Officer.

Additionally, izneo readers will soon be able to get access to Kodansha Comics’ same-day-as-Japan simulpubs with new chapters of ongoing series like EDENS ZERO, Attack on Titan, Domestic Girlfriend, To Your Eternity, and APOSIMZ.

Readable both online and offline, izneo’s catalogue already offers more than 30,000 e-comic-books in a vast array of genres coming from many publishers. The platform features
an ever growing number of European comics and US comics as well as manga, graphic novels and webtoons. The coming of Kodansha Comics will enrich this great catalogue by adding some of the best mangas to your library.

For more information about izneo, and to discover their full catalogue comprising more than 30,000 e-comic-books and start the reading experience, head over to https://www.izneo.com/en/

You can also discover our full manga catalogue here: https://www.izneo.com/en/manga

About The Seven Deadly Sins

Established in New York in 2008, Kodansha USA Publishing (KUP) is a subsidiary of Kodansha, Japan’s largest publisher. Its manga imprint is Kodansha Comics, which began by releasing Katsuhiro Otomo’s Akira and Shirow Masamune’s The Ghost in the Shell. Today, thanks to hits like Attack on Titan, Pretty Guardian Sailor Moon, Noragami, and FAIRY TAIL, it is now the No. 2 manga publisher in the United States by revenue. VERTICAL, which publishes fan favorite manga titles like Chi’s Sweet Home and BLAME!, as well as the popular MONOGATARI novel series, is also an imprint of KUP. Both Kodansha Comics and VERTICAL are distributed by Penguin Random House Publisher Services. http://www.kodanshacomics.com

About izneo
izneo is the first global online comics platform. Available at all times on the following screens; Computer, Smartphone, tablet, Nintendo Switch and Nvidia Shield, Izneo offers to discover, read and acquire the largest catalog of comics, European comics, mangas, graphic novels and Webtoons. On top of an ever growing catalog, Izneo provides also recommendations from other readers and the very best digital reading experience out there!