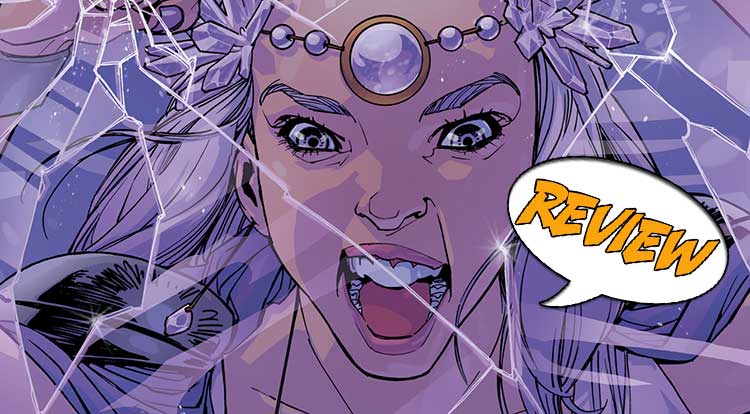 Amethyst is having trouble finding allies. But wait – could the amethyst tiara from her Earth parents somehow help her out on the Gemworld? Find out in Amethyst #2 from DC Comics! Previously in Amethyst: Amy Winston turns sixteen – which means a double celebration, one on Earth and one on the Gemworld, where she is Princess Amethyst. Her Earth parents know about her double life and are trying to understand it, to give her the freedom to take care of her responsibilities there, but to them she is still their child. But when she goes through to the Gemworld instead of reaching her castle, she finds its shattered remains floating on chunks of crystal. She goes to the neighboring kingdom of her friend, Lady Turquoise, and finds her strangely distant. An appeal to the people for help yields no response, except from one person, Phoss, a warrior.

KICKING IT INTO GEAR

Amethyst #2 opens with a brief flashback to when Amy was thirteen and just learning about her family. It’s a shock to learn that the parents you’ve lived with your whole life are not your blood parents, but doubly so to learn that your unknown real parents are also dead. Her retainers, Granch and Lady Citrine, fill her in and share their expectations of how she’ll take over, and rule, and fight the bad guys. Even at thirteen, Amy realizes that’s more responsibility than she’s ready for. She remembers Lady Citrine telling her how honored and respected House Amethyst was.

In the present, Amy has reached House Sapphire, where they are amused to hear that anybody ever thought House Amethyst was honored. Amy flies into a temper, and Sapphire drops her through a trapdoor, along with Ypsilos (her horse), Phoss, and Phoss’ giant caterpillar Stan. Anticipating this will not be good (and attributing this to watching cartoons, which is very cute), Amethyst slows their fall. They survive, relatively unhurt, only to be surrounded by a pack of toothy creatures. Amy is set to rescue Phoss, but she yells for Amy to join her on Stan. As it turns out, Stan can run really fast if he has to.

That’s not Phoss’ only surprise. They race to the shore where a boat is waiting. The crew recognize Phoss, who used to work for them. In the subsequent calm, they have a discussion over the merits of flying versus traveling by ship. Then Phoss introduces a friend, Elba, who is obsessed with Earth. They ply her with questions, and the conversation turns to Amy’s Earth parents and the book they gave her about crystal healing.

Rather than laughing about it with her, the girls take it seriously and lead her through a meditation to help her focus through her amethyst tiara. And suddenly she finds that she can sort of astrally project herself through any amethyst. After a view of her Earth parents and some random other scenes, she finds her missing people, all trapped in amethyst crystals, frozen, where with one crack, they could be gone forever. Even Citrine and Granch are there. And the place seems to be Lord Opal’s castle.

In the world of Amethyst #2, we are naturally going to see a lot of jewel tones. It’s got to be an interesting limitation to work with as an artist, as each kingdom will have such a strong association with a color. I kind of prefer how young Amy’s blonde hair stands out, as opposed to current Amy’s purple coloring. We honestly don’t see much of House Sapphire, but the ship is headed for Aquamarine, and that gives some nice contrasts. And I like that good old Stan is mainly green.

The characters are drawn with a lot of movement and personality, as well as some humor, such as when Phoss hits bottom in their fall. The young people look young, and they have a good range of expression. There is, however, a notable tendency for them to be drawn with overly large open mouths such as when they’re shouting, or surprised, or laughing, or angry, or even just talking. I find it loses its impact by the end of the book, but overall the rest of the art is quite fun and there’s a lot of creativity in the settings.

Amethyst #2 is a decent second issue, and it moves right into the action rather than dwelling on the angst, which is refreshing. There’s a decent set up for the surprise at the end, which intrigues me enough to want to check in further on the story when I can.

Trying to find out what happened to her kingdom, Amy makes some new friends.