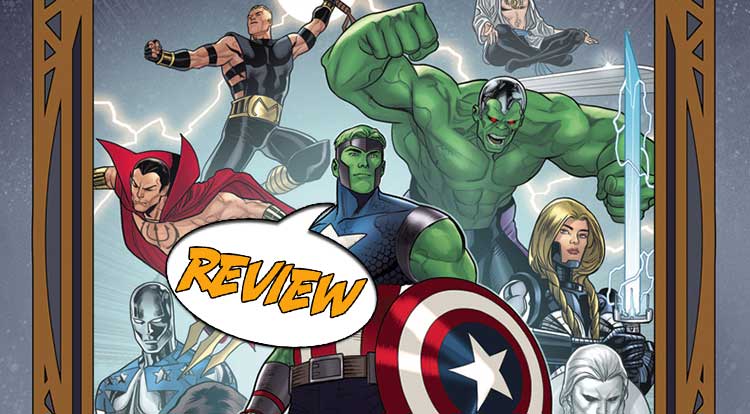 Reality is twisting and stretching and our heroes are unsure of how to stop it before it all breaks apart.  Your Major Spoilers review of Tarot #4 from Marvel Entertainment awaits! Previously in Tarot: Merged into a single amalgamated band, the combined heroes of the amalgamated Avengers and Defenders race against the clock to put everything right

Think Of The Children!

Tarot #4 opens up with the mix and match Avengers/Defenders fighting the cartoon characters that had attacked them at the end of last issue.  During the fight the Captain America/Hulk combo finds themselves transported somewhere else for a moment.  That’s when it starts to sink in that not everything is right.  After defeating the cartoons, the group is transported away again, this time to New York City and are attacked by Black Panther.  They try to explain what is happening but he’s not listening.  Suddenly a score of other characters ranging from Weapon X style Wolverine to Spider-Ham join the fray. That’s when the amalgamated version of Doctor Strange reveals that he has learned the truth.  The tarot cards that had caused the problems in the first place have fallen into the hands of a pair of children and everything that is happening is due to them playing.  The team develops a plan to get the cards from the kids but not before The Nameless One attacks. With some slick talking and some distractions, the team is able to get the cards from the children and everything is set back the way it was.  The Avengers and The Defenders try to make sense of what has happened but agree to just let the event fade from their memories.

When I first started reading this series, never in a million years did I think it was going to end with an all out, multi-dimensional, 4th wall breaking, brawl involving cartoon characters, Spider-Ham, and a Namor/Scarlet Witch amalgamation.  But, I’m glad it did.  I don’t think Tarot #4 does an excellent job at tying everything up, and the ultimate explanation for things does come out of left field. Yet, there’s no denying that this is a fun issue to read and look at.  The sheer amount of craziness that is thrown on the pages makes this a book that the reader can let just wash over them.  Sometimes just seeing something fun and goofy is more important than a solid, tightly plotted story.

Tarot will probably not go down as an all-time classic, nor do I think it was going for that. What Tarot manages to do though is throw curveball after curveball and not care if it makes a ton of sense as it does that. For some, this may be a turn off and that’s completely fair. But, for others I think this is a fun series that thrives on just reading to see what happens next and Tarot #4 does a good job wrapping it all up, even if the ultimate conclusion was a bit unearned. 3.5 out 5 stars.