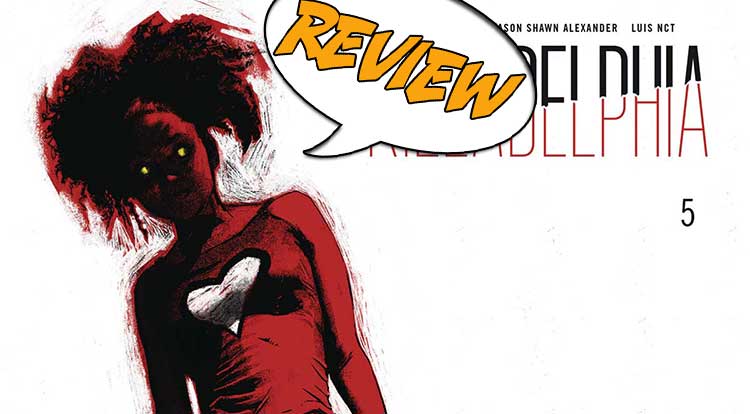 The sun rises on a city in chaos and carnage. Adams’ plan is in motion, but does Tevin hold the key to stopping him? Find out in Killadelphia #5 from Image Comics! Previously in Killadelphia: John Adams has set his plan into motion. Philadelphia is in the hands of the vampires, more vampires than the Sangsters anticipated. Unbeknownst to them, Adams has an ally in the Mayor, who is willing to sacrifice the city as in his eyes, it was already dead. James, the older Sangster, feels the need for blood, and when he steps outside, the young vampire Tevin is there to help him and to seek help from him against Adams. Jose and J.J. talk about the loss of family each of them have had and find themselves drawing closer to each other.

AFTER THE LONG, DARK NIGHT

Morning dawns in Killadelphia #5 on a city full of the dead. The first thoughts we see are those of James Sangster Sr., thinking about the incredible courage it will take to get through this, and how, if there is one more night like the one just past, that will be the end of Philadelphia.

Cut to a press conference where the Chief of Police announces that the previous night’s events were due to terrorists. A reporter challenges him with the facts that the dead were drained of blood, and the attacks stopped at sunup. He turns the mic over to the Mayor and when he leaves the stage, finds Jose and J. J. there to talk to him. They tell him that his problem is, in fact, vampires, and they can prove it.

When they awaken in the evening, Tevin tells James more about his story. As a young man, despite his grandmother’s prayers, he was going nowhere. But then Adams approached him, offering power and immortality. All Tevin wanted was an end to his pain and, to be fair, vampirism did cure his depression. But he was given the job of watching over a book and keeping it away from Abigail. The thing is, he learned more about it. The people who put the book together did so from their spirit. Adams has been trying to understand it intellectually. Tevin studied the book and is able to understand it, and it has given him knowledge and powers.

Early in the issue, there was a panel of a woman putting up posters with Brittany’s picture on them. That evening when Brittany awakens (sharing a bed with Abigail), she leaves to take care of family business. She goes to that woman’s house – her sister. Her sister who was once a vampire but who has been turned back. She begs Brittany to turn, but instead Brittany accuses her of leaving her, like their parents did. How cruel is this – these young women were slaves when they were alive, their parents sold away from them. Ironically, Abigail Adams said she would take care of the girls. Oh, what a brutal origin, and to have that life in a past that you remember for over a hundred years. And after all those years, Brittany, who still looks like a young girl, gives herself over to her anger and her vampirism.

J. J. brings the Chief back to his father’s apartment where he sees for himself James, apparently alive, as well as Tevin. I like the fact that when he’s confronted with incontrovertible evidence, he accepts what he sees rather than denying it. And Tevin has a plan. J.J. and Jose can torch vampire hives, with tactical backup, while he and James take out Adams himself. It sounds like a plan that could work, but it seems so tenous, hanging by the slenderest of threads.

I love the art of Killadelphia #5 so much. It has a gritty flavor with bold inking that gives each image intense drama. We get montages where a page or two of images flashing behind the thoughts we read show us what’s going on, sometimes in concert with the words and sometimes in stark contrast. And then there’s a stunning double page splash that shows James dreaming, and in his dreams faceless angels above him are warring against winged devils who have glowing yellow eyes, much like the vampires.

This is a book where the characters have such incredible depth. We’re introduced to Tevin as a young man, underprivileged, who led a hard life on the streets and was a criminal. Then we learn he’s a vampire, and our first thought is that he’s not much changed. But even last issue we saw that he is thinking for himself, and he’s paying attention. He’s not willing to let hypocrisy blind him. The panels of him talking about the book and showing, in glowing abstract, what he’s learned, are incredible.

Killadelphia #5 is a stunning book, deeply thoughtful, reaching deeply into the dark part of the soul of our country and showing it to us through the metaphor of a vampire story. As awful as the vampires are, this book leads us to wonder whether there are not other things, actually existing in our world, that are even more awful.

The sun rises on a city with a third of its population dead. Can Philadelphia survive another night?