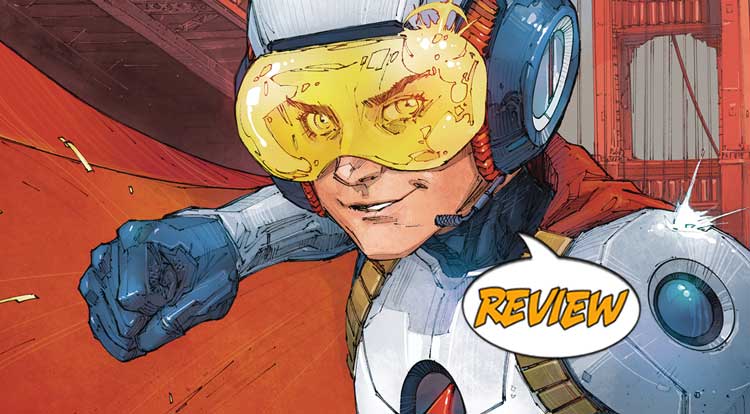 Bart Simms has seen his future…  and it just gave him a super-suit!  Your Major Spoilers review of Doctor Tomorrow #2 from Valiant Comics awaits! Having received a super-suit from his own alternate, older self, Bart Simms is enjoying being a superhero… except for the parts where his flight powers cut out in mid-air. Doctor Tomorrow, his other self, gives him a crash course in flying before heading to a major league baseball game to get some attention. His goal is to draw out Ivar, the Timewalker, but when the time portal opens, he is instead greeted by unknown foes in holographic disguises. Bart and Tomorrow engage them in combat until they get the message that Ivar is dead, and meet Neela Sethi, the new Timewalker. Doctor Tomorrow explains to Neela and her dinosaur pal how the multiverse works (with helpful diagrams!) and sends Bart home to rest before the big battle with his space-warping enemy, Hadrian. Bart is saddened to find that his dad is once again out of town, then alienates his only friend for the metaphorical full house of teenage superhero angst. When Doctor Tomorrow finally arrives, they join an army of Valiant heroes in facing down Hadrian, who has a few tricks of his own up his sleeve…

My biggest complaint about this issue is the absolute lack of identification in the crowd scene in the third act, featuring all the Valiant heroes (Faith, Bloodshot, Shadowman, Archer & Armstrong, yadda yadda yadda) but identifying no one specifically by name. There’s also some undertones to Doctor T’s story that indicate there’s more going on than there seems, and I honestly hope that it’s true. When he tells young Bart that he’s never met another version of himself, my lie detector started pealing the alarm. Given this issue’s quick pace, I do hope that there’s more to things, because the story, while entertaining, is kind of boiler-plate 80s crossover fodder. Even the design of Doctor Tomorrow’s costume seems engineered to invoke a sense of classic heroism, and a reveal that something else is happening would be quite welcome. Artwise, it’s a very solid issue, with slick lines and vivid colors, and while Jim Towe is great with the “flying across the skyline” stuff, some of the facial expressions are indistinct or indistinguishable. I like the last page collection of heroes confronting the villain, but even there a lack of detail and expression can be seen, as Armstrong, The Eternal Warrior, Bloodshot and Shadowman all have exactly the same face.

Given some of the dialogue in this issue, I wonder if it even takes place in the current Valiant continuity, but Doctor Tomorrow #2 is a perfectly fine comic, with art that hits the mark more often than not and a story that, while familiar, hits all the important beats, earning 3 out of 5 stars overall. I’ll be watching the rest of this series to see whether we’re getting a two-fisted kid-friendly retro book or something that uses that facade to go more post-modern, but I suspect that either ending will make for a nice collected story.

Solid universe-spanning adventure that hits all the bases, but it's moving a little bit fast for my tastes, and a LOT of stuff is getting glossed over... Hopefully that's part of the design.