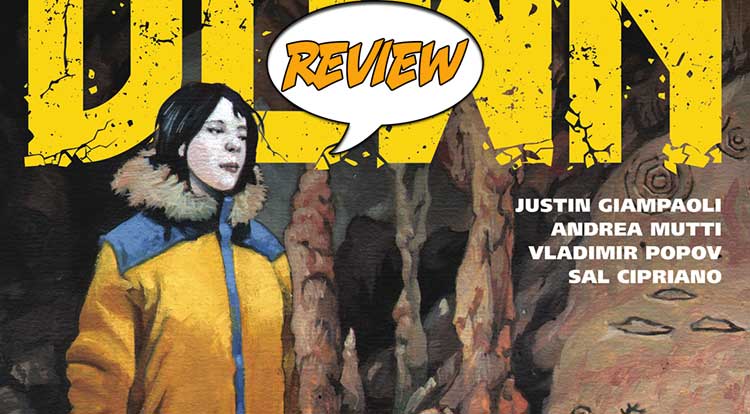 When Dr Young agrees to fly out to Siberia at the behest of the US government to help identify cave artwork from the Pleistocene era, little does she know the real purpose of her trip.  In Starship Down #1 from Dark Horse Comics, she will find an ancient starship.  But what hides inside?  Find out in your Major Spoilers review! Previously in STARSHIP DOWN: the discovery of Pleistocene era artwork in a mining town in Siberia signals the start of an uneasy alliance between American and Russian governments, as the true nature of the discovery is unveiled.  Tens of thousands of years ago, a starship crashed onto our planet, and began harvesting the local Neanderthals.  Now, humanity wants its slice of the action, but at what cost?

A clever compound of current US and Russian rivalry, with a dash of hard science, flavoured with mystery and suspense, Starship Down #1 is quite the cocktail of elements.  Usually, one or more willjar, making the whole an unappetising meal.  Happily, this opening issue is a confident, competent introduction to a compelling mystery that promises great things in future releases.

Dr Joceyln Young is a no-nonsense cultural anthropologist from Duke who is convinced to join a US – Russia joint investigation into…something found in Siberia.  At first she believes the investigation relates to ancient cave paintings, but soon, the scales fall from her eyes when the true nature of the discovery is revealed to her.

Starship Down #1 is a strong opening issue.  Writer Justin Giampaoli has clearly done his research, as his characters rattle of military jargon and scientific terms.  This is done to provide atmosphere, a sense of verisimilitude, which helps undergird the fantastical elements revealed later in the issue.  The characters, whether military or scientific, American or Russian, are experts at the top of their game.  This no doubt will make their future mistakes all the more believable, as they come up against forces for which their expertise has no answer.

For those of you old enough, English enough, or steeped enough in British telefantasy, will get a definite Quatermass vibe.  The televised adventures of Professor Bernard Quatermass captured a rapt UK audience in the late 50s and early 60s, along with movie adaptations.  Nigeal Kneale, the writer of all the episodes on the four Quatermass serials, expertly fused science fiction with horror, in the same vein as HP Lovecraft did with The Color out of Space.  Fans of Doctor Who during the mid-1970s well remember the first three years of Tom Baker’s run, which drank from the same dark and horrible well.  This sub-genre is especially evocative, as humanity is pitted against ancient forces more powerful and rapacious than anything they have ever faced.  The reason I mention all this (apart from showing off) is to make the link between Kneale’s pioneering work and what Giampaoli is doing with Starship Down #1.  The introduction of a Vatican Cardinal into the storyline echoes Kneale’s greatest story, Quatermass and the Pit, in which faith is exposed as a race memory relating to alien genetic manipulation.

Andrea Mutti’s art matches the almost documentary tone of the story telling.  Uniforms, military vehicles, equipment are all displayed with a skill that speaks of plenty of research and a commitment to fidelity.  Likewise, the characters are each displayed in a solid way – everyone is shown as a real person, with their own quirks, foibles and worn in looks.  These are people who feel, who express and who will no doubt suffer in the medium turn.  The coloring by Vladimir Popov matches the bleakness of the Siberian wilderness – all whites and grays and steel blue.  It is really refreshing to see the three principle artists working on this issue coming together in this manner.

Starship Down #1 is a strong, confident opening issue which ably introduces the characters and situation.  Dr Young is the perfect viewpoint character; a strong female, a leader in her field, committed to her field of expertise.  The other characters are similarly strong and no-nonsense, which makes for an entertaining read.  While the story idea might not be fresh, it is certainly told with heaps of credibility, and the final page certainly whets the appetite for more to come.

Fine characters and a compelling mystery are introduced with a confident opening issue that grabs reader’s interest from the opening pages. While this scenario has been seen before, it is always once that piques my interest, at least, and I feel confident that there is a large audience for this book. This gets a highly recommended from your reviewer, and I strongly urge you to get out and buy this opening issue of a series that promises to take the reader on a fantastic adventure.