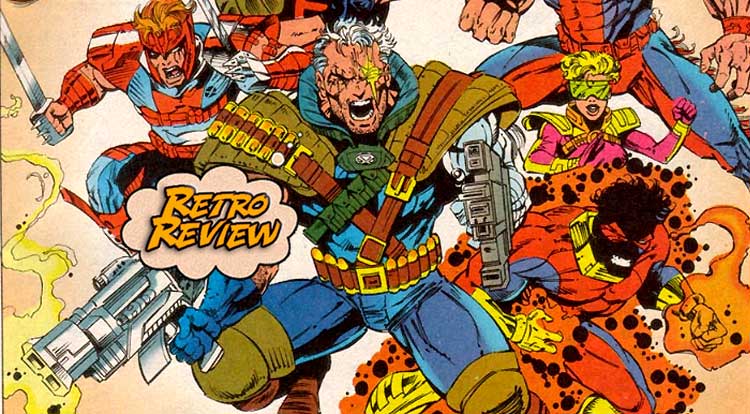 It all seemed like such a good idea at the time: Marvel’s 1993 annuals all introduced brand-new characters to the Marvel Universe!  But then, things got…  X-TREME!  Your Major Spoilers (Retro) Review of X-Force Annual #2 awaits! Previously in X-Force:  Initially assembled by Professor X as a new class of mutants, the creatively-named New Mutants found that learning to use your powers in a world that hates and fears you ain’t all it’s cracked up to be.  When they met the mysterious solider-from-the-future called Cable, the team reformed as one of the many “proactive” super-teams of the 1990s, rebranding as X-Force!  That’s when things get… In a dark alley in the Southwest, a woman named Michelle is running for her life, trying to escape capture by agents of the mysterous Strong.  (That name is for those who thought that calling the kid straight out of Rob Liefeld’s 501 commercial “X-TREME“ was too on the nose.  Michelle and X-TREME have a REALLY long-winded conversation that explains a little about his powers, a little about hers, something about the background and the fact that he hasn’t got his memory.  Finally, they start to square off, only for X-Force to arrive and interfere! While I’m not a fan of Tony Daniel’s art, I have to admit, this double-page spread actually looks pretty cool.  After slashing the X-Forcers open, X-TREME ignites their blood and leaves them in a heap, making his escape.  Of course, this isn’t all the X-Force members, as Cannonball and Siryn are undercover inside Strong’s organization as they speak, looking for Feral, another member of the team, who is being held for some sort of experiments in Strong’s secret labs.  Cable and the big shoulderpads members track down and engage X-TREME, and this time use their combined powers of earthquakes, huge shoulders, ponytails and guns to bring him down… Now that he has his backward hat back, X-TREME reveals that he doesn’t known anything about his past, only that Strong has leverage over him.  When Cable offers to help him get free, they come up with a plan to get a SECOND team into the lab, as X-TREME knockes out Rictor and Boomer to take them inside as bait.  Teaming up, they bust in to find that Cable and Siryn have been taken out (and, notably, Siryn stripped down to her underwear), forcing Cable and Strong to go mano-a-mano, while the team deals with Michelle.  You remember Michelle?  This is a story about Michelle… Cable manages to cut open Strong’s superhuman hide, allowing X-TREME to use his powers and ignite… EVERY IOTA OF BLOOD IN HIS BODY, causing strong to burst like a pumpkin under a truck tire.  It’s pretty X-TREME, is what I’m saying.  The team is reunited, Siryn is still pretty much naked, while Cable and X-TREME get the grudging “tough guys acknowledging each others’ toughness” handshake, seen so often in comics of the era. The issue ends with the new mystery man setting out for new mystery adventures, while the X-Force team sets off to their regular comic book, having completed their requisite Backdoor Pilot.  Writer Fabian Nicieza’s plan for the Adam-X character was initially that he was the lost third Summers brother, fathered by a Shi’ar with Cyclop and Havok’s mother while she was trapped in their camps in outer space.  That plotline was dropped and eventually led to the new character of Vulcan, while X-TREME proved to be an artifact of a particulary time and place, like Surge Cola and the films of Yahoo Serious.  He dropped off the face of the Earth after a handful of appearances.  (Nearly 30 years later, he has appeared 16 times, an average of .59 appearances per year.)  X-Force Annual #2 isn’t the worst of the ’93 slate, and frankly, X-TREME isn’t the worst character therein introduced, but…  to quote a famous penguin, “Lord, it ain’t good”, with the entire affair earning 1 out of 5 stars overall.  I have forgiven Fabian Nicieza for the excesses of the X-Force era, and Tony Daniel is responsible for some likeable and entertaining Batman stories, so we’ll just take a moment to consider those books instead, and… pretend this never happened, ‘kay?