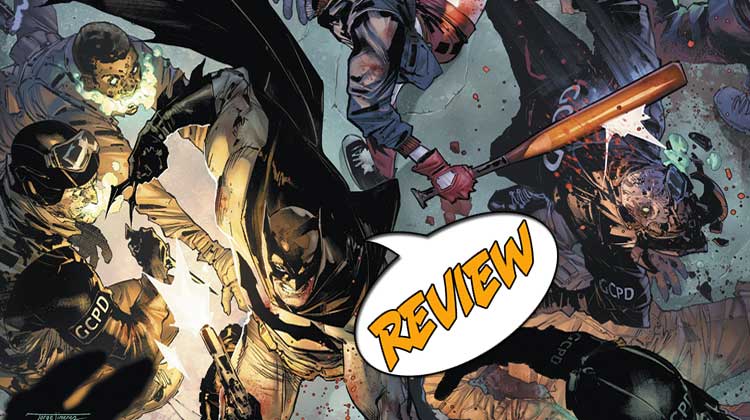 Batman #91 continues the first storyline from the comic’s new creative team. It’s a terrific tale that teams up his biggest baddies with some of his best allies! SOLICITATION: To save Gotham City, Catwoman will have to commit the greatest heist in the city’s history! But hot on her trail are the Penguin, the Riddler, a horde of assassins, and the master criminal called the Designer! And the most dangerous person standing in her way is the man she’s trying to save: Batman. And what complications will his arise from his new sidekick, Harley Quinn?

There’s nothing worse to read than finding the Joker talking with an “average” citizen. It never ends well. And that’s how this issue begins—he’s telling a bartender a joke, which has a point to it. It includes what happened to the guy laying behind the bar, the previous bartender. And it doesn’t end well.

A lot of this issue, though, focuses on Batman versus Deathstroke. Seems Slade knows where The Designer is, and the Dark Knight needs to know. It leads to a fight in the skies on the wings of one of the Batplanes. That storyline doesn’t necessarily end well, either.

In the background is a discussion between Catwoman and Harley Quinn. Catwoman has to commit a crime to help save Gotham, but she’s conflicted about it. Harley’s there and wants in, but Selina isn’t sure she should be involved.

Each issue in this story looks at another “big bad” in Batman’s Rogues’ Gallery. Seems that Deathstroke is occupying Batman, but we already know how will be prominent in the next issue thanks to the final page in this one. It will be interesting and more of a mental challenge instead of the physical one this time.

Whenever Batman faces a villain team-up, it’s a high-stakes confrontation. I always enjoy those, and Mr. Tynion is doing a terrific job with them now that he’s the regular writer on this series. He’s learned at the feet of the master—Scott Snyder—so I can’t wait to see what he’s got coming for us, including just who The Designer actually is. I’m hoping it will be someone we know about but haven’t seen in a while. Just not Alfred, okay?

I like my Batman with smaller pointy ears on his mask, and that’s exactly what this art team provides. They don’t get in the way of his fighting (or walking through a doorway) like the bigger, Kelley Jones-style ones do.

The facial expressions are spot on, and the battle sequences are very dynamic. I know who is doing what to who, and that’s helpful given all the people involved with Batman in this issue. Well done!

I enjoyed Tom King’s run on this title, but I did feel he often got overly verbose—too many words! Even though there is plenty of dialogue here, the action makes it an easy read. This is a visual medium, after all!Maybe all this Catwoman attention is building up to Mr. King’s upcoming Batman and Catwoman series, if that is still on?

I still hear Mark Hamill’s voice when the Joker speaks, and I have no trouble with Kevin Conroy speaking Batman’s lines. They fit perfectly with all this!

We have questions that need answering, such as the aforementioned identity of The Designer. We also need to know how these various storylines will interact with each other moving forward, so I’m already salivating over issue #92! So glad I’m a Bat-fan these days!

Whenever Batman faces a villain team-up, it’s a high-stakes confrontation. I always enjoy those, and Mr. Tynion is doing a terrific job with them now that he’s the regular writer on this series. He’s learned at the feet of the master—Scott Snyder—so I can’t wait to see what he’s got coming for us.