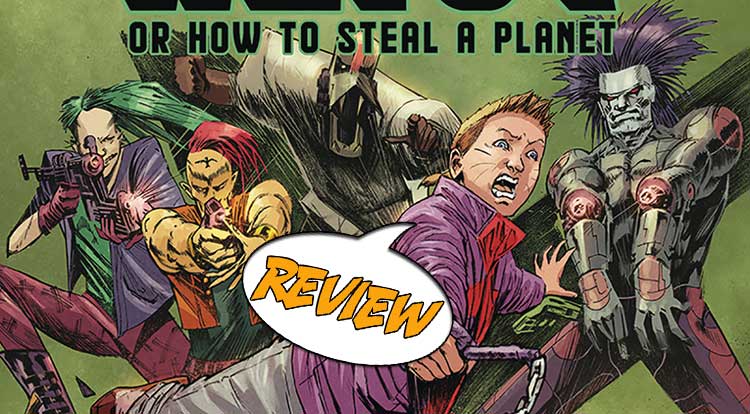 Heist, Or How To Steal A Planet #5 Review

Glane Breld has the documents he needs to establish ownership of the planet, but he doesn’t know what Samuel Reven is up to now. Find out more in Heist, or How to Steal a Planet #5 from Vault Comics! HEIST, OR HOW TO STEAL A PLANET #5

Previously in Heist, or How to Steal a Planet: Glane Breld makes his first moves. While he and Gaville sneak into Samuel Reven’s party (looking to sneak off with some documents), Eddy Lets is prepared to cause a distraction down by the docks. Celene, pissed off about not going to the party, is off to rescue Brady, who was kidnapped. Eddy lures in a Gland Breld impersonator and kills him, which draws Reven off, so Breld and Gaville can steal the papers and a car, which they fly past just as Celene storms through Brady’s kidnappers and leaps out the window with the kid. It’s just about flawless – too bad Reven has just discovered a new way to get to Eddy Lets.

SKIPPING FROM ONE SETUP TO ANOTHER

Important documents are only the beginning. As Breld tells us at the start of Heist, or How to Steal a Planet #5, they also need a judge on their side. Their target is a woman, Judge Kelberta Kether. This, too, is an intricate plan, involving disrupting her typical lunch cart, and shepherding her through the streets into the hands of a group of Vice Boys (and Girls) who use their sexual wiles to tempt her (quite willingly) into a new club. (Or is it?)

Meanwhile, Samuel Reven has his crews looking for any lead on Eddy’s sister. Between bribes and torture, they discover Lera had a daughter named Kenni and spirited her out of the Lets’ compound. Her adoptive father died, and she went into foster care, actually the Medical and Cosmetic Testing Division of Dignity Corp. (Hey, if someone’s trying to pull one over on the bad guys, might as well make them really reprehensible.) She was sold to someone in the Thieves’ Guild as an accountant, did well, retired, and vanished from the public eye.

After a get-together over lunch, Breld is off on an errand with Brady in tow. Breld has given the kid a gun, and as they go into Conqueror Crow territory, Breld takes them out one at a time (with sleeping darts) as the kid just hides. The activity brings out Dudge, the leader of the crows, whereupon Brady shoots himself with a dart. But Glane is here to apologize for stealing a car from the Crows and tell Dudge where to find it and the keys.  Well, that stymies him.

But even as Breld’s setup for the judge, because of course it is a setup, pays off, Reven’s people find Kenni Lets. Could this throw a wrench into the works?

A LITTLE VIOLENCE AND A LITTLE SLEAZE

The world of Heist, or How to Steal a Planet #5 is richly fascinating. It is depraved and diverse. The super-rich and the super-powerful rub elbows with the poor and down-trodden. It’s a world that looks nothing like our own, yet it looks familiar, like an extrapolation of our world. Heist is a place where everyone is out for a buck. Every panel oozes with personality with just a little bit of unsavoriness around the edges.

Sex is hinted at all over the place from the Vice Boys to the walking holographic ads for places (that follow potential customers around). I like the way it is suggested, leaving the details to our imagination. The violence as well is not always explicitly shown, but we get just enough of an idea that it’s pretty bombastic. And through it all is just a touch of humor.

We’re rolling into the next phase of Heist, or How to Steal a Planet #5, and the stakes are getting higher. The world and the characters have been established, so now we can sit back and enjoy watching the story unfold. You do have to pay a little attention, but this is still a solid story.

As Glane Breld moves forward with his plan, Samuel Reven may have his own plot in the works.