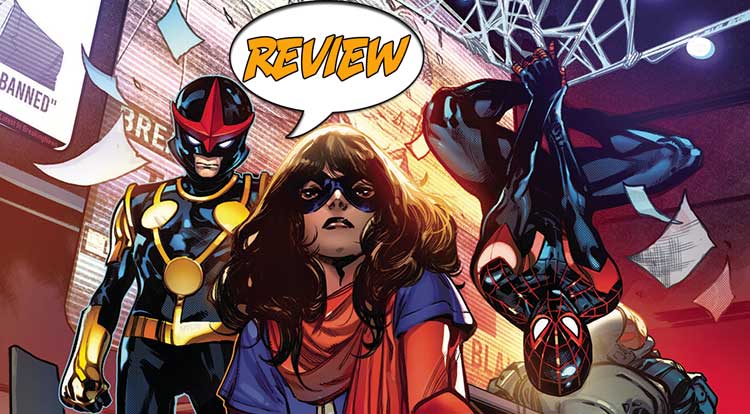 Marvel’s young heroes are some of the best and brightest of the universe.  But what happens when something goes wrong, will they lose their time to shine as Earth’s next mightiest heroes? Your Major Spoilers review of Outlawed #1 from Marvel Entertainment, awaits! Previously in Outlawed: The world has had enough of teen heroes. The crackdown has begun. And the lives of Marvel’s next generation will never be the same again.

Outlawed #1 opens up in the middle of a congressional hearing.  One by one heroes such as Ironheart, Nova, Captain Marvel, and Captain America take their turn fielding questions from a senator.  Most of them revolve around the pros and cons of teens being superheroes, with consistent mentioning of a terrible event. Things then cut to a day in the past.  Ms. Marvel, Nova, Viv, Power-Man, Spider-Man, and the rest of The Champions are on scene of a science symposium.  The keynote speaker, a charismatic and teenage environmentalist, has been receiving threats from Roxxon and the young heroes are there for protection.  It doesn’t take long before they find themselves under attack from a group of armed soldiers who also control a leftover dragon from the War of The Realms event. Things quickly go south as the team fails to communicate well, which leaves Viv supercharged with Power-Man’s chi and unable to control it.  In a last ditch effort to control the situation before mass casualties, Ironheart and The Wasp join forces and eliminate Viv. This also sends the Dragon crashing on the building the science convention is happening in, with only Ms. Marvel present to protect the keynote speaker.  Cut back to present day and legislation has been passed to outlaw teens from being superheroes and the formation of a group called C.R.A.D.L.E., led by Speedball, to enforce the law.

In most situations, it’s forgivable if a comic happens to tell a story that another comic did, just due to sheer numbers. But it’s a whole other thing when it mimics a story from not that long ago, within the same company, involving the same characters, and then references that story.  The similarities between Outlawed #1 and the beginning of Civil War is mind boggling.  Not to say there isn’t merit in a story about the nuances of allowing children to put themselves at risk in this way. But, this just has too many elements from Civil War.  Swap The Champions with The New Warriors, H.A.M.M.E.R. with C.R.A.D.L.E., and the Superhero Registration Act with Kamala’s Law. The one thing that this has going for it above it’s inspiration is the focus on the younger characters, which have been some of the best characters in current rotation at Marvel.

For the most part, the art in Outlawed #1 is pretty good. The characters look their age, the action is bombastic and enjoyable and there’s crisp and vivid colors throughout. One thing that didn’t sit well with me are the few shots throughout where a character is gesturing towards the reader. In those panels it looks as if whatever limb is going towards the 4th wall is 7 feet long with rubber bones and G.I. Joe action figure joints. It’s very strange and jarring considering how the rest of the book looks.

It’s too early to dismiss Outlawed as an event right now.  But, Outlawed #1 didn’t do it any favors and in fact, gave it a significant hurdle to overcome.  With the framework established in this first issue, there will need to be significant story beats to make this a unique story. As it stands it just feels like a retelling of the early moments of Civil War and what is troubling is that this seems to be the intent.  2.5 out of 5 Stars

For the most part, Marvel’s usage of it’s younger characters has been very solid for years. Characters like Miles Morales and Kamala Khan have become well-known and popular. Which is why it’s sad that the first event to really focus on them, so far is just a rehash of another event.