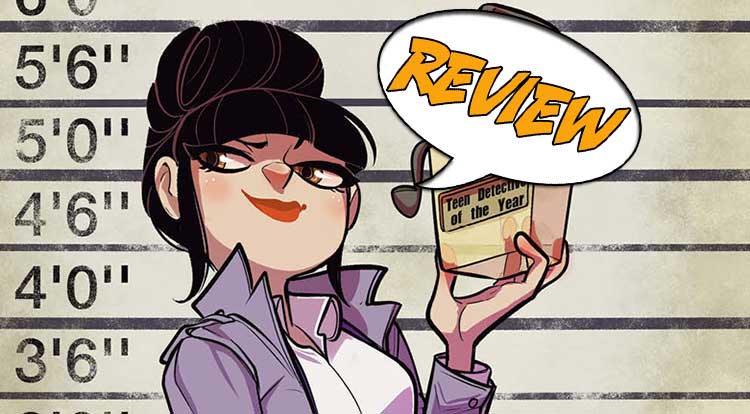 Charlotte Grote, teen detective is off to university. But first, can she win this year’s award for Teen Detective of the Year (16-18)? It’s mystery and mayhem in Wicked Things #1 from BOOM! Box. Previously in Wicked Things: In the world of Giant Days, meet Charlotte Grote, child detective. Well, she’s nineteen years old and on the brink of adulthood. This is her last chance to be recognized as Teen Detective of the Year, and the competition is steep!

THE GIRL DETECTIVE IS GROWING UP

Wicked Things #1 opens with Charlotte Grote in her bedroom, full of all kinds of stuff, as her mom hints that maybe she should clear some of said stuff out before she goes to university. It’s a great open – we immediately feel like we understand Lottie. Then her mom pulls out a dusty file box that looks like it hasn’t been touched in years, and it turns out that Lottie has a history of being a child detective. She’s also somewhat bitter that “National Solver” magazine never featured her, though. Then she finds out she’s been nominated for Teen Detective of the Year (16-18) even though she never bothered to put herself forward.

A month later she is on her way to London with her friend Claire, who nominated her, and she has a case of nerves. She’s excited, but also trying to figure out how she’ll ever deal with not winning. Before long, they’re at The Savoy, and this is a world where Teen Detectives are a Thing. Charlotte fangirls over her European rivals – who are too cool for her. The only one who talks to her is a young American (Norton) who feels that her age bracket is considered geriatric, for Teen Detectives, that is. I love this take on everything going wrong – it’s fresh and amusing.

Her luck continues the next day – Miyamoto, the Japanese detective (Charlotte is a HUGE fan) asks her to sit at his breakfast table. They talk through his interpreter, Miss Maki, who misinterprets Charlotte hugely and insultingly – and without her realizing it. By mid-day, she is starting to have second thoughts about the whole thing. Even the vendor room doesn’t cheer her up, but she can be snarky at the awards party at least.

Then the Japanese interpreter intercepts her with a gift and an apology from Miyamoto, and a request for her to help him work on a case. This should only take a few minutes; she’ll hardly miss any of the awards. Charlotte, stars in her eyes, goes up to his suite, and the door is open. Even though I suspected where this was going to go, the set up is delightful. She takes her shoes off. She sits and waits for a couple seconds. She starts poking around the luxury suite. And sure enough, she finds Miyamoto murdered. And then Miss Maki finds her, red-handed, and screams.

The art of Wicked Things #1 is dynamic and gracefully expressive. This is a comedy, so everything is just a little over the top. The facial expressions are wonderful. If you had a copy of this with no dialogue, you could get a good idea of what’s going on by the expressions alone, even by just the eyes. I love it.

I enjoy Charlotte as a hard-boiled teen detective who, at the drop of a hat, is as full of insecurities as any young person. She’s played to great comedic effect. I hate to see her hopes crushed, but it is also awfully funny, from when she is mistaken as an autograph seeker to when Norton insinuates that she’s geriatric, then flirts with her. Claire is more cool and collected, and she makes a great assistant, balancing out Charlotte’s highs and lows.

BOTTOM LINE: THIS ISSUE FLIES BY

Wicked Things #1 zips right along, setting up the story briefly and then plunging into the fun. I love a good mystery, and I have to guess that many of the sleuths are also suspects which should set up some entertaining dynamics. I highly recommend this book.

Who doesn’t love a young detective? Well someone may be setting Charlotte Grote up…for murder!