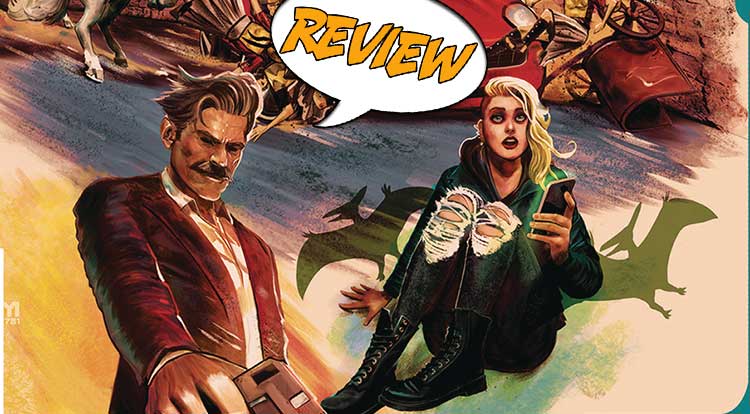 The second leg of the race through time is about to begin, and the racers have no idea just how wild things are about to get for them. Your Major Spoilers review of Backtrack #2 from Oni Press, awaits! Previously in Backtrack: The drivers are caught like flies in Quellex’s sick game, racing through history for the entertainment of a megalomaniac.

If You’ve A Date In Constantinople…

Backtrack #2 picks up right after the first issue, with the racers freaking out over having been told that they are actually racing through time. That’s when the mysterious Quellex appears, to confirm what has been told to the racers.  After shaking off a bribe, he disappears, giving the racers a chance to rest before the next leg of the race.  The participants spend the time introducing themselves and filling in each other on bits of their backstory to varying degrees of success and ambiguity. The race begins again and the racers soon realize that they are about to charge into an ancient Constantinople garrison. Everyone ends up taking different routes, with one racer being impaled by a spear and another being left behind after sabotage.  Eventually everyone else makes it to the next checkpoint.  Suddenly the last driver who was left behind arrives, with a gun.

Something very strange is going on with Backtrack #2.  In an issue that spends half of its pages on people talking to each other and introducing themselves, I still have very little idea of who any of these people are, with the exception of the main character, Levy. It’s almost easier to identify them by their cliches rather than their names.  There’s the ex-con who got out of the game, the cop with a terrible secret, the spoiled rich girl who doesn’t get the seriousness of the situation, and so on. To be honest though, I wasn’t expecting a deep character study in a comic book about people racing with dinosaurs and through ancient Turkey.  But, unfortunately the racing scenes leave much to be desired as well.  With the exception of someone being explicitly ran through with a spear, it’s really difficult to understand what exactly is happening.  In fact, it takes some awkward dialog at the end to explain some of the bigger events that happened during the race. It’s not until everyone is out of their cars, discussing the race that I even realized that the main character came in 5th, when it looks like she’s neck and neck with someone else vying for a win.

Bottom Line: B-Movie Territory (and not in a good way)

There’s a conscious decision to invoke a certain amount of fun schlockiness here. But, unfortunately it goes a bit too far and just becomes bad, and not so bad it’s good. Between uninteresting characters, clunky dialog, and poorly executed action scenes, it would take a whole lot of that 70’s car movie flare to make this worth it, and it just doesn’t have it. 2 out of 5 stars.

Backtrack #2 manages to take a fun and goofy setup that could be a good, cheesy romp and drowns it in cliches, weird dialog, and confusing action sequences.