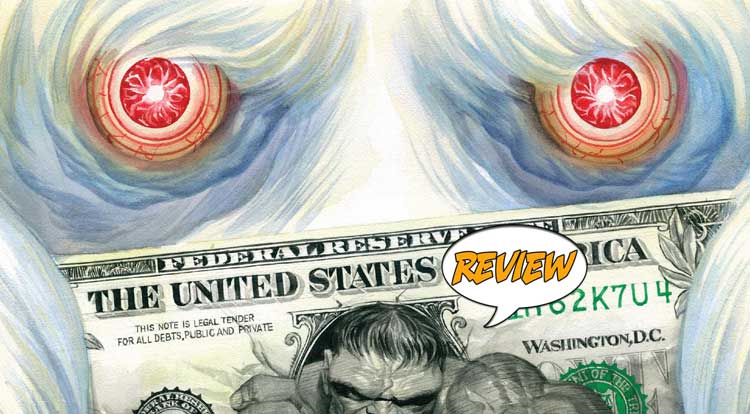 Xemnu’s back… and this time he has the most powerful weapon of all: Merchandising!  Your Major Spoilers review of Immortal Hulk #32 from Marvel Comics awaits! Previously in Immortal Hulk:  The gentle giant Xemnu™ has come to Earth™ to fight evil – as the Incredible Hulk™!  And You™ can join him –  as he battles Robert Banner™, the Strangest Man Of All Time™!

(Hulk™ is a trademark of Roxxon Energy™.  For a brighter tomorrow.)

Long considered nothing but a big fluffy joke, Xemnu is back, and thanks to the plethora of screens in the world, he’s achieved peak media saturation. Working along with Dario Agger of Roxxon, he has convinced the public that he is the greatest hero alive and that Robert Banner is nothing but a menace, a monster called The Devil. As the issue progresses, we find that The Hulk is trapped within a mirror by the mental conditioning, and Dr. Banner insisting that Bruce is his middle name. Even Doc Samson isn’t immune, but Dr. Charlene McGowan is sure of one thing: Xemne’s Magic Planet doesn’t exist, and it never did. Of course, that revelation comes too late for The Hulk, as Banner smashes the mirror and buries his alternate persona, seemingly once and for all…

…of course, The Immortal Hulk isn’t the only personality in his mind.

BUT HE’S NOT THE ONLY ONE

The last-page return of World-Breaker Hulk is utterly terrifying to me, not just from Ewing’s eerie, well-written script, but visually, as he is seen as a full head and a half taller than the massive Immortal Hulk. And worst of all, he seems perfectly, eerily calm. The visuals throughout the issue are top-notch, with Rick Jones’ glowing green eyes creeping me out, Xemnu repeatedly gazing directly into the fourth wall and a chilling page of blood and strange tentacles meant to signify Xemnu’s terrible psychic grasp. The realization that he’s using cell phones and streaming networks is the only part of the plot that feels flat (it is a little bit too pat, but also seems perfectly logical) and the story ties into previous silly Xemnu appearances and makes them all retroactively creepier. Both art teams (one for Xemnu/Incredible Hulk and one for Banner/Immortal Hulk) deliver on the chills, but even with so many monsters in play, facial expressions are paramount. When Xemnu kills and consumes Agger’s faithful majordomo it’s as horrifying on a personal level as it is on seeing the strange tooth-laden alien anatomy.

The real triumph of Immortal Hulk #32 is in making the main character and presumptive hero’s return to reality seem even more terrifying than the villain he’s ready to smash, with every page dripping with unease, even the ones that don’t contain flat-out horror moments, earning a near-perfect 4.5 out of 5 stars overall. It’s hard to balance a superhero story with a horror story, but this book pulls it off with skill and aplomb. If you’re not reading Immortal Hulk, you’re missing the best Marvel comic of the modern age.

Reworking a campy Silver Age tale into a modern horror fable must have taken tons of work, but this one nails it, and the last-page reveal is a solution scarier than the problem.