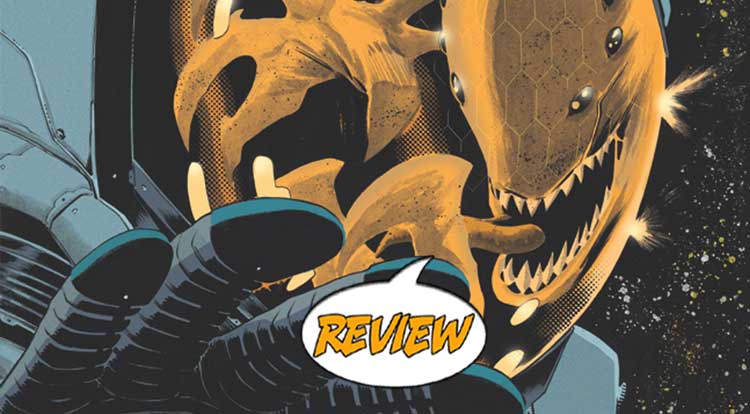 One small step for a man… One giant leap for a Dire Wraith!  Your Major Spoilers review of ROM: Dire Wraiths #2 from IDW Publishing awaits! Previously in ROM: Dire Wraiths:  1969: The first lunar mission has landed and they aren’t alone.  Trapped, hunted by Dire Wraiths, the astronauts find themselves wishing that help weren’t over two-hundred thousand miles away.  A Wraith invasion of Earth is looming and only the most isolated men in human history stand in their way.

As the first manned spacecraft landed on Earth’s moon, they were greeted by The Dire Wraiths, alien shape-shifting monsters! Fortunately, the Adventure Team was on-hand to defend them! Unfortunately, the AT leader, Hank Armstrong, has been infected by a Wraith. On the surface, four armored Adventure Team members engage the Wraiths while the astronauts (pointedly NOT named in the issue, so the may or may not be the team we know from our history) are caught in the crossfire. The Adventure Team falls one by one, in bloodier and bloodier ways, while the infected Armstrong takes over the Apollo command module in the name of the Wraiths. One of the astronauts (implied to be Commander Neil Armstrong), takes up the American flag planted in lunar soil and uses it impale one Wraith, but the Wraiths pick off the heroes one-by-one. One of the Wraiths explains a bit of their history, including an explanation of ROM and the other Elonian Spaceknights, but the issue ends with the astronauts gravely realizing that no knights are arriving to save the day.

NOT YOUR FATHER’S SPACEKNIGHT

The IDW ROM continuity is, obviously, different than that of the Marvel take of the 80s, but I was pretty surprised to see how early the Dire Wraiths were attacking Earth in this universe. Seeing the trained commandoes of the Adventure Team die in increasingly graphic ways hammered home the horror of the situation, but a certain indistinctness to the art undercut the drama a bit. That’s a theme throughout the lead story, honestly, as it’s hard to tell the difference between characters (especially since most of them are unnamed and wearing helmets) and even the color-coded armors of the Adventure Team don’t entirely mitigate it. There’s also a backup story with a chapter of the ongoing ROM story, but it’s a little bit nebulous about when it happens as well, leaving me a little confused about the whole issue. There’s something to be said for a good cosmic horror story where the body count is high and the chances of survival are low, but it’s hard to get engaged with these characters on more than a cursory level because of these issues.

Still, ROM: Dire Wraiths #2 does manage to ratchet up the tension and make it clear that terrible things are happening and will continue to happen, making for a solid horror movie tone and the art is good at technology and armor and such, which helps to blunt the problems of identification/expression a little bit, leaving us with a better-than-average 3 out of 5 stars overall. Even with the wobbles, there’s clearly a lot of interesting things being set up here, and fans of slasher flicks may find even greater enjoyment in these bloody pages.

But It's Okay Horror

Back story on the Dire Wraiths with a high body count and some interesting, albeit wobbly, art. Still a solid middle chapter.