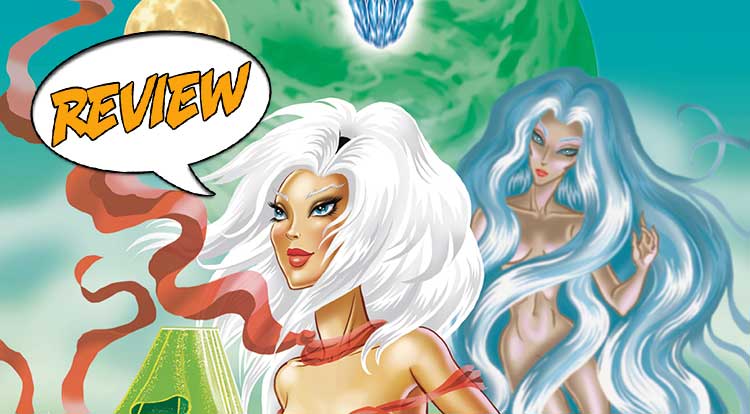 In Elfquest #3 from Dark Horse Comics, we watch as Timmain and Skywise’s daughter Jink’s backstory develops, from that of a baby innocently wiping her father’s mind of his memory of Tam Cutter, to a woman blessed with all the elvish gifts.  Realising what she did to her father was wrong, Jink sets off on an epic…elfquest!  Will she find her father? Find out in your Major Spoilers review! Previously in ELFQUEST:  When Jink was but a baby, she did something remarkable and wiped her father’s memory of his soul-friend Tam Cutter.  But her father Skywise still set out on a quest, seeking to assuage the sense of loss his lack of memory created.  Now grown up, Jink has set out on a quest to right the wrong she did…

I first came across Elfquest when I worked in a comic book store in the mid-90s.  Even then, the series had been going for almost twenty years, and had built up a devoted following.  There was something about the mixture of the art, the stories, the philosophy, that attracted that dedicated readership, and on the basis of Elfquest: Stargazer’s Hunt #3, that ethos is still going strong.

Long on backstory, and short on action, this issue will please long time readers, who are given a wide glimpse of the culture of the Elves of Starhome.  Jink, the child of Timmain and Skywise, grows up in a world surrounded by love, knowledge and beauty.  While it is a guilt-free, uninhibited lifestyle, for her, there is one niggling problem that she caused herself.

In wiping her father’s memory of his soul-friend Tam Cutter, Jink inadvertently set Skywise on a quest to discover why he knew he had forgotten something, but not of what.  That niggling guilt follows her as she grows to maturity, following the philosophy of the Elves, until she decides to give up all she has and follow and find her father.

The main character, Jink, is an interesting creation.  A creature of sensation, she spends most of the issue absorbing everything around her – listening to conversations, interacting with her peers, and pondering the meaning of life.  This is counterpointed with the moments we spend with Skywise, as he travels the cosmos on his quest.  We get more deep thinking about the nature of existence in a cosmos too vast to really grasp, and how a sense of identity, when contrasted against the tapestry of existence, can feel like it is being swallowed whole by the inky blackness between the stars. This contrast gives the story its scope and impetus as Jink begins to understand what she must do to erase the act she committed in her youth.

While Elfquest: Stargazer’s Hunt #3 is really light on action, there’s a great deal of the Elvish to examine and explore.  In this, the art by Sonny Strait comes into its own.  Starhome is an ethereal world of formless color, a place where pleasure, sensation and introspection all come together to provide the perfect grounding for Jink.  His elves are tall, languid creatures, dressed in diaphanous gowns and robes, to the point where the art does become quite sensual in places.  The artwork for the elves is much the same for all of them, though of course Strait’s deft touch brings out the characterisation of those who feature more prominently during the issue.  When there is a little action towards the end, there is enough verve and excitement to bring the issue to life, away from the lightness of Starhome, to the more visceral thrills of the hunt found elsewhere in the realm.

Elfquest: Stargazer’s Hunt #3 is an interesting reading experience, as it is packed with dialogue and inner monologues throughout its page count.  The Pini’s creation has been singular, a result of a focussed vision over many decades.  There’s a sense of deep history that may be confusing to new readers, but given a bit of persistence, there’s plenty in this issue that provides all readers with a story laden with sensation, innocence and a burning desire for adventure.

A tale of growing up and discovering one’s self, Elfquest: Stargazer’s Hunt #3 in many ways is not just the beginning of a story seeking to erase a mistake, but also a quest for self-identity in a vast universe.