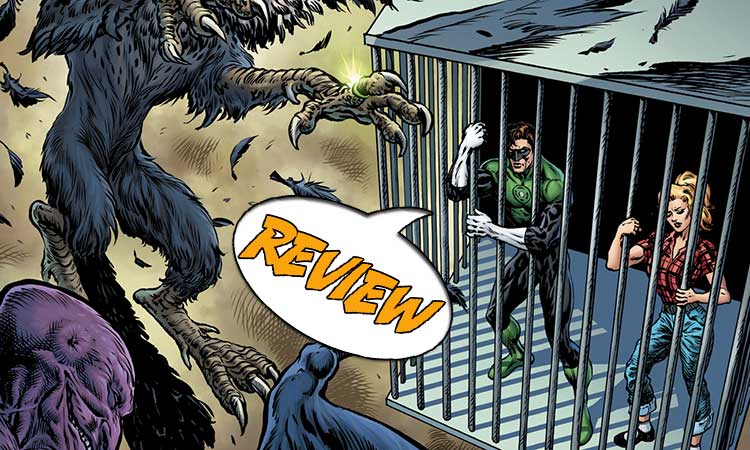 Hal Jordan, The Green Lantern, has had his wings clipped. Thankfully an ancient threat has arrived just in time to stave off his boredom, or kill him. Your Major Spoilers review of The Green Lantern: Season 2 #2 from DC Comics, awaits! Previously in The Green Lantern: Season 2: Hal Jordan is stuck on the worst possible planet he can imagine: Earth! Reassigned by the bold new Guardians to patrol his home planet, Hal finds himself a bit bored with his familiar haunts versus the infinite expanse and adventure of outer space.

The Green Lantern: Season 2 #2 begins with a man guiding a group of people through a futuristic looking city.  He tries to show off the wonders there, but the group is set upon by unseen creatures. Things then shift to Hal Jordan who is touring the same city with his new friend Eve.  She explains that her father built the city but has gone missing.  Suddenly they are confronted by a humanoid with a skull/squid for a face.  Hal encases them in a bubble and it’s discovered that the skull/squid is a mask that had attached itself to the man. Eve is then attacked by another person with one of the masks.  Hal is then overwhelmed by mask wearers.  He’s taken to a dig site where he’s confronted by Rakaww, a giant half man half vulture.  He reveals he’s been using the humans he’s captured to dig eggs that have been underground since ancient times and contain warriors of his people. He throws Hal in a prison cell, where he meets Kraww, the former leader of The Ornitho-Men who. Hal breaks out and goes to save the people digging the eggs out.  He destroys the masks as Kraww fights Rakaww.  While they fight the eggs hatch and Hal is the first thing they see.  He gives the hatchlings a little speech straight from an after school PSA, which ruins their worth as warriors. Hal is later contacted by The Guardians who inform him that they’ve detected alien activity that he needs to check out.

They Sure Do Talk Funny

On the surface, The Green Lantern: Season 2 #2 is a pretty straightforward comic book.  Hal meets a pretty girl, she has a problem, he saves the day, then moves on.  What makes this issue unusual is that all the dialog in this issue reads as if it’s been pulled from the stream of consciousness journals of a beatnik poet, deliberately so. This is clearly a story decision, because Hal’s ring, repeatedly tries to warn him that no one is making any sense.  This leads to a classic case of “too much of a good thing”. At first, it’s confusing, then it’s intriguing, then it’s kind of fun, but by the end it’s grating.  It’s a shame because this little gimmick could’ve really helped elevate a basic storyline.  On the flipside, this issue wraps up with a scene that  encapsulates the whole idea of a wanderlustful Hal Jordan being trapped on earth, in such a lovely way, that it’s hard to be mad at the issue.

The art in this series continues to be confounding.  On one hand, the retro-futuristic look of the city this issue takes place in is great and captures that aesthetic well.  Also, like usual, the character work is great and has a profound silver age look that is wonderful to look at.  On the other hand, the ink heaviness in this issue makes some of it kind of muddy and excessive.

Bottom Line: Its Own Worst Enemy

The Green Lantern: Season 2 #2 is very definition of a middle of the road comic book.  There’s a good, straight-forward, uncomplicated plot here.  What brings it down though was the very thing thrown in to try and spice it up.  The gimmicky dialog overstays its welcome and makes the issue annoying.  There are definitely things to enjoy here, the final scene of the issue and the way that Hal saves the day are both stand out moments. 3 out of 5 stars

The Green Lantern: Season 2 #2 has some nice things going for it and some lovely scenes. It’s unfortunately bogged down by the very gimmick that was thrown in to make it more interesting.