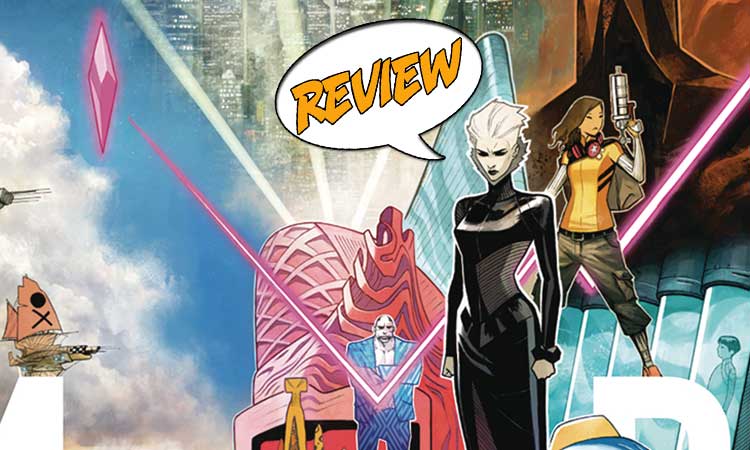 The latest universe from Jonathan Hickman is a deadly and twisted place.  Between the strange worlds and even stranger inhabitants one thing stands above the rest: Remember your manners. Your Major Spoilers review of Decorum #1 from Image Comics awaits! Previously in Decorum: The universe is not what it used to be. After eons of war, colonization, terraforming, and technological advances, everything is a mess of consortiums, alliances, and civilizations both advanced and primitive.

Decorum #1 is broken up into three chapters.  The first chapter brings the reader to a primitive looking planet where a robot conquistador is departing from his galleon and approaching the shore. He is confronted by the locals, humanoids that resemble early Americans.  Before he can get too close the locals open fire with laser weapons.  Before long an armada descends from the sky and a full blown war erupts. As the conquistadors advance inland the natives retreat inward to a pink crystal.  Just as the robots reach the native’s village the crystal emerges from the ground and takes off into space. In chapter two Neha is introduced.  She is a courier who is given a job she is not keen on taking.  After some tense negotiations she finally accepts and heads out to make her delivery.  In chapter three the reader is taken to the inner sanctum of Doman D’vorth V who is awaiting a delivery.  Instead a woman appears and begins to reprimand him over his apparent betrayal of “The Syndicate”.  Then Neha arrives with her package. To everyone’s surprise the package isn’t for Dorman but for the woman who’s name is Morley.  Inside the package is a red crystal that Morley uses to kill everyone in the room except for herself and Neha.

Anyone who has been reading the latest X-Men books from Jonathan Hickman will be somewhat familiar with the way he likes to fill his comics with little touches like strange symbols, tangentially related text, and a couple infographic type images.  Those who are familiar with some of his other works like Pax Romana or The Nightly News, know just how dense his books can get with these “little touches”, to the point where some issues can look like futuristic training manuals with hints of a comic thrown in.  Decorum #1 falls somewhere in between these two. Not to say that the issue isn’t dense in it’s own right with things to see if the reader looks closely, most of the extraneous bits are separated enough to not be intrusive and instead does a really solid job at enriching the world and taking some of the storytelling burden off of the dialog. As for the story itself, it’s difficult to separate this issue from what could come.  This is a space opera, with a lot of moving pieces and only partially established players. So much of Decorum #1 is devoted to establishing a theme and a groundwork.  But that’s not to say that the actual story here in the first issue is bad.  It’s actually rather good by managing to be both engaging in it’s own right while also planting interesting enough seeds that make me want to see what blooms going forward.

There is just so much going on in Decorum #1 visually that it’s difficult to break it down.  From switching styles to represent advanced and primitive perspectives, to selective color work (a la Blacksad or Sin City) to clean and cold corporate infographics, to expressive faces, this book is just a joy to look at.  Also, visuals aside, the way the art is used is astounding.  Considering the first 3rd of the book has nearly no dialog but still manages to convey what is going on is proof of how effective and seasoned the work of Mike Huddleston and Rus Wooten is.

Bottom Line: One Of The Most Impressive Comics of The Year (so far)

Upon first look, Decorum #1 may come across as obtuse, too abstract, dense, and even a bit pretentious. But underneath the top layer is the beginning of a fantastic new universe and a utilization of the comic book medium that only Hickman can pull off. And while, Hickman’s writing and plotting is excellent here, it’s only executed as well as it is due to the art of Mike Huddleston and the lettering of Rus Wooten. 5 out of 5 Stars.

Decorum #1 is a powerhouse of a comic book. Intriguing plots, a wonderfully established new universe, and dynamite artwork makes it one of the best first issues in a long time.