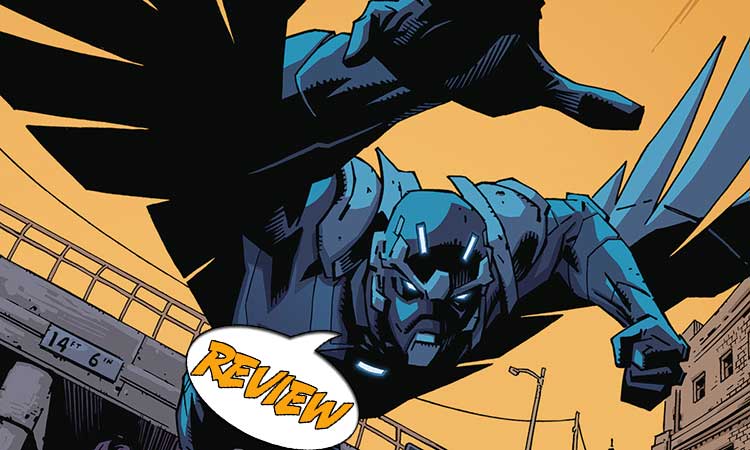 Stealth, the vigilante, watches over Detroit, but something is not quite right with him. Find out what it could be in Stealth #1 from Image Comics! Previously in Stealth: Stealth is a superpowered vigilante in Detroit. As the city decays and goes through changes, he wages war on crime. But lately it seems as though he’s been changing and isn’t quite the same man he used to be.

THE CASUALTIES OF SUPERHEROICS

Stealth #1 opens with reporter Tony Barber writing about the decline of infrastructure in Detroit. It’s extremely depressing and the tone is angry, and he calls his editor asking for an extension to work on it a little more. Tony lives with his dad (Daniel) and tells him he’s going out for a while. Daniel asks him why he’s going out at two in the morning, but it isn’t – it’s around eight. He’s been getting more confused lately, and plainly Tony is worried about that as well, but his dad shrugs it off and Tony goes for his walk.

The next thing we see is Stealth, flying through the night in his armored suit. He’s keeping an eye on the city. Two young men tagging a wall see him land nearby – a man is holding up a dry cleaner. They’re excited to see the vigilante in action, right up until Stealth throws the man through the window and beats him bloody. This is a dark book. Detroit is a perfect setting for it – Stealth and the city are metaphors for each other.

Tony gets home and finds his dad with a head wound. He tripped and hit his head. He’s an ex-fireman, and downplays the injury, insisting he didn’t have a concussion. Tony heads into his workweek, and things are not much better. He works for the Detroit Herald, and there are a lot of empty cubicles at the office. He tells his editor, Cindy, that he may need to take some more time off with his dad. She, in turn, is concerned about him. The piece he wrote at the start of this issue was supposed about a nearby art fair. She reminds him of the staff cuts they’ve had to make with the not-so-veiled threat that he could be among the next.

We cut again to Stealth, flying over the city, musing about how the world makes less and less sense as time goes on, and how we all have failed each other. He suddenly dives to attack a car and hauls out the passenger, demanding to know where “the girl” is. A number of other cars pull up, men piling out with guns, shooting at him, and he blows up one of the cars.

All is not quite what it seems. Tony gets home and hears the TV news talking about how Stealth attacked a police car on the freeway, ending up in a firefight with police. Wait a second – what really happened here? There is a crash and a thump from upstairs and he runs up to find his father, and that his father is Stealth. This was brilliantly set up, and it adds a fascinating dimension to the darkness of the story. The vigilante hero is suffering from dementia, and his reality does not line up with our own. Tony’s life has suddenly become immeasurably complicated.

The art of Stealth #1 is solid, beautiful at one moment and deeply serious in the next. This is a complicated story. The skyline of Detroit and some of the long-distance views are stunning. Close up shots tell a different story – the abandoned buildings and overgrown lots that occasionally make the news for the rest of the country. But there still is a Detroit, and there are thousands of people living there and trying to turn things around.

The emotional range shown in the characters is powerful. As Tony’s stress builds, we see it in his face, in his body language, and you understand that there is a lot of weight on this young man’s shoulders. His dad is a tough older man in denial, probably not even entirely understanding what is happening with him, at least not all the time. But seeing him as Stealth is terrifying. His mood shifts at a moment’s notice, and the mask of the armored suit is sinister and implacable.

Stealth #1 is a retelling and expansion of a one-shot story. Stealth and Tony are Black, and I think that makes it all the more powerful. It’s a grim beginning handled quite eloquently.

An exploration to the possibility that life in an armored bodysuit has its consequences.