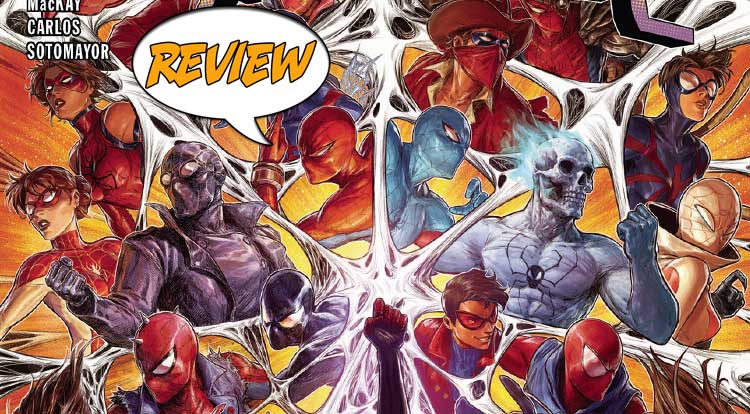 Spider-Man must lead the army of spider-sonas and respin the Web of Life and Destiny…  Your Major Spoilers review of Spider-Verse #6 from Marvel Comics awaits! Previously in Spider-Verse: The end is here!  All the various threads of this series (Miles Morales, Spider-Man Noir, SP//dr, Webslinger, Spider-Ma’am, and all the other Spider-People and Spider-Sonas) come together to re-spin the Web of Life and Destiny!  But the journey won’t be easy, so don’t be surprised if all the spiders don’t make it through alive…

We begin with Miles Morales and a small army of spiders descending on the Web of Life and Destiny in search of Spiderling, the lost daughter of Peter and Mary Jane Parker. With the help of the mysterious Spider-Zero, they realize that she’s trapped in a snarl within the web itself, forcing them to fight their way through a horde of villains from Earth-51778, the home of Japanese Spider-Man. Things look dim for our heroes until that hero arrives to defeat his foes, along with his giant robot, Leopardon, freeing Miles and Spider-Zero to find their way into the snarl itself to free Spiderling, who is somehow now the Patternmaker, the only Spider who can save the day. While she does that, Spider-Man has to save Spider-Zero, who has been thrown free of the web into space. It’s a high-stakes race to save reality and their friend, testing Miles as a hero once more…

My major complaint with this issue is Miles himself, who spends the entire issue carrying, rather than wearing his mask. It makes for weird moments, especially as he’s literally digging through the fabric of space/time/reality, and feels very strange given that so many of the other characters here are wearing masks already. As far as the overall story goes, it’s a bit slight to fill the whole issue, with the main focus being the various Spider-sonas in these pages, and while I loved the appearances of the likes of Web-Man and Japanese Spider-Man, the sheer number of Spider-Folk who went unidentified was a little bit wearisome. The plot is wrapped up pretty easily with a big bow, and the issue ends with a hug, which I actually appreciate, especially the affirmation that the various universes will always have their Spider-protectors, but it also gave the story an anticlimactic wrap-up. Still, the art made for entertaining reading, and the fact that I wanted to know more about the various alternate heroes and their homeworlds is a measure of success for this comics.

In some ways, the biggest takeaway from this issue is that Takuya Yamashiro is gold and Marvel really needs to do something with him on a regular basis ASAP. That said, Spider-Verse #6 makes for a spirited read, albeit one that feels a bit slight, and the strength of the art makes up for a whole lot of confusing and/or frustrating moments (PUT ON YOUR MASK, MORALES!), leaving us with a better-than-average 3 out of 5 stars overall. It’s nice to see that Marvel is aware of the success of the Spider-Verse (and especially ‘Into The Spider-Verse’) and using these characters, and I hope to see more of this sort of thing going forward.

There are some rough spots, but strong art and characterization make up for many of them, and Takuya Yamashiro is always worth the price of admission.