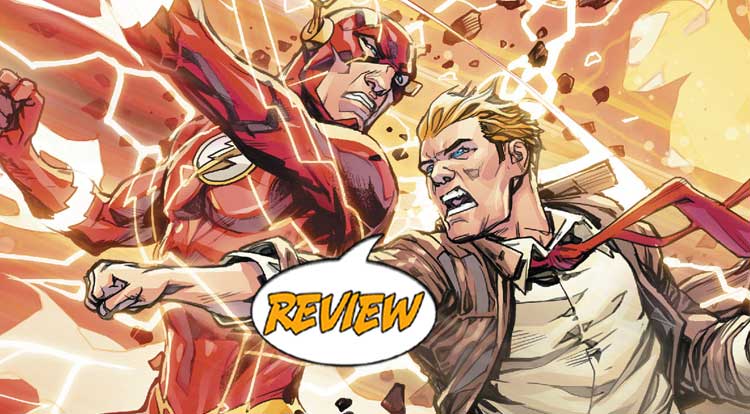 The Flash faces his most dangerous threat ever…  Barry Allen?!  Your Major Spoilers review of The Flash #750 from DC Comics awaits! Previously in The Flash:  While a supercharged Speed Force wreaks havoc on Barry Allen’s life, a new threat appears on the horizon in the form of the deadly Paradox.  Destined to destroy the Flash’s legacy, Paradox sends his herald, Godspeed, to trap the Flash family!

“PARADOX IS COMING FOR YOU…”

We open with a young man in a cafe, speaking directly to the readers as he explains the impact the Flash has had on his life. At his lowest point, he was ready to make a terrible decision, when a chance encounter with the Scarlet Speedster pulled him out of a spiral. Cut to Barry Allen, dealing with his first CSI case in over a year, having been non-stop Flash during that time. Combining his skills as a scientist with his super-speed, he not only cracks the case, but brings in the criminal responsible, finally getting the balance of his identities just right. The story is intercut with more testimonials about the effect that Flash has on Central City, eventually revealed to be interviews conducted by Iris West as part of her latest story. That’s when Godspeed busts in, insisting that Flash come with him, after which things get explodey with the debut of Paradox. That ends in a cliffhanger, cutting to a brief tale of Captain Cold, lying low after his recent defeat, during with Flash thinks Cold is out to get him, but all the Rogue really wants is a cold beer and to watch hockey. That’s followed by a tale of alternate realities, which is a bit too brief, a battle with the Mirror Master, which is too long, and the first solo story of Jay Garrick in recent memory. (It’s also set in the 5G timeline, as it references the late-30s debut of Wonder Woman as the first superhero, so we’ll see how that all shakes down.) Finally, we see the newly-minted Cosmic Wally West, trying to unsnarl the timelines of the new reality while keeping his hero-or-villain status unclear.

There’s a lot to love in this book, for Flash fans of most eras, including nice pinups of Barry as The Flash, the extended Flash Family, the Justice Society (!!) and more. I really enjoyed the Captain Cold solo story, showing off the complexities of the Johns “working class villain” take, accompanied by perfectly gritty Kolins art. The maybe-debut of the new/old Jay Garrick is also good, and while I don’t really know what’s going on in the first story (it’s just loaded with continuity riffs dating back to ‘Rebirth’), it serves as a nice celebration of the current Flash era. With so many good moments, though, the misfires stand out even more. The final tale is nothing more than a coming attraction with truly unpleasant art by Brett Booth, making me worry that this new phase for Wally is going to be just another murderfest, while Wolfman and Rossmo’s chapter cleverly references a lot of classic Flash moments (like ‘I’m being turned into a puppet’ or the giant-head cover), it also goes on too long and ends on a character note that rings false against the other stories in the book. (I suppose I could take it as the pre-Crisis Flash, but even that feels odd, given the focus on alternate realities in these pages.)

BOTTOM LINE: A LOT GOING ON IN HERE

In short, there’s a lot of good, a little great and just enough bad to balance out above the median line. The Flash #750 does a lot of things right, continuing the ongoing plot of the book while effectively hitting the celebratory anniversary notes, bringing in a lot of talented creators to memorilize multiple, incompatible eras of the character’s history, earning a better-than-average 3.5 out of 5 stars overall. If you’re a fan of the Wally West Flash, it’s probably going to be a bummer for you, but it’s good to see that they didn’t forget the character who actually IS celebrating 80 years, which makes it worth the price of admission in my eyes.

This issue is jam-packed with stuff for Flash fans of all eras, with a little glimpse of 5G, the new Wally West and even the return of Jay Garrick.

The downside is that, among these diverse takes are some real clunkers.