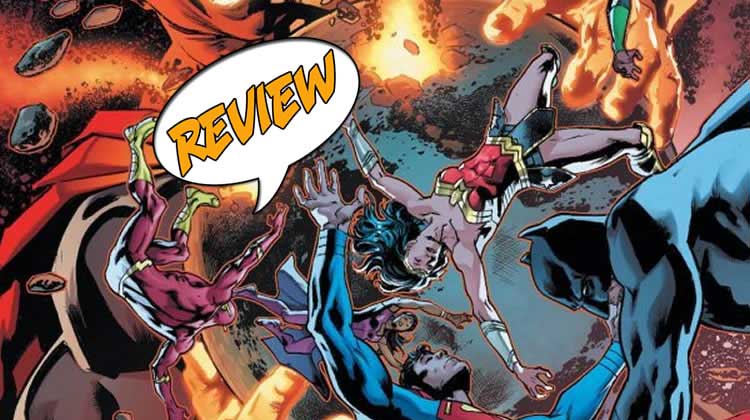 Justice League #42 continues the first storyline from the new creative team. If this book is any example of what these folks have in store, it’s going to be a great ride! Take the jump for your Major Spoilers Review of Justice League #42 from DC Comics. SOLICITATION: The Justice League suffers defeat after defeat in the ever-tightening grip of the Eradicator. But do the heroes have a greater plan? It’s up to the Flash to outwit and outrun the onslaught of Daxamites, but his next step may be his last.

One of the biggest problems facing people telling stories about the greatest heroes on Earth is, how do you challenge them? I mean, you’ve got Superman, Wonder Woman, and Green Lantern, just to name a few. What one hero lacks, another makes up for. How do you tell a compelling story if they aren’t playing against the biggest baddies around?

Fortunately, Robert Venditti (Remember him from Hawkman, another wonderful DC comic?) and company are up to the task. An army of Supermen from the planet Daxam? Yeah, that’ll do the trick!

Right away, I’m worried. How can the Leaguers who don’t have Superman-level powers survive such an encounter? Well, you use the biggest super ability of all—brain power!

Venditti’s writing keeps us on the edge of our seats. Even Superman seems concerned! When Batman and Green Lantern give in to the tension and start to argue, Supes has to stop that from happening. They need to keep their focus on the battle at hand!

Even the cover shows the trouble the League is in “Tossed in Space” indeed! (Love the Lost in Space reference there!)

The solution to the problem makes perfect sense once you see it. Before that, though, I admit I was baffled!

Aaron Lopresti is truly one of the best artists around when it comes to clearly portraying action storytelling (and probably one of the most underappreciated). He shines in this issue in particular with Matt Ryan’s inks. The action really pops off the page!

The battle sequences sparkle with super-powered action, and the facial expressions are very well done, including the aforementioned Superman sequence as he gets the other Leaguers back on track.

BOTTOM LINE: The League The Way It’s Supposed to Be!

I know every issue or storyline can’t be the same or we’d get bored, but this is the Justice League the way it should be, with high-octane action and a “challenge of the super-friends” that makes you want to stand up and cheer when the good guys figure out how to win.

The hero of this issue and how they help the rest of the League is something I’m not going to spoil (although the solicitation does that), but the reveal and set up for next month was very satisfying to me! Loved it!

Now all the League has to do is win the fight next month! I’m sure if won’t be TOO easy, but I hope it is just as enjoyable as this issue was!

This is the Justice League the way it should be, with high-octane action and a “challenge of the super-friends” that makes you want to stand up and cheer when the good guys figure out how to win.