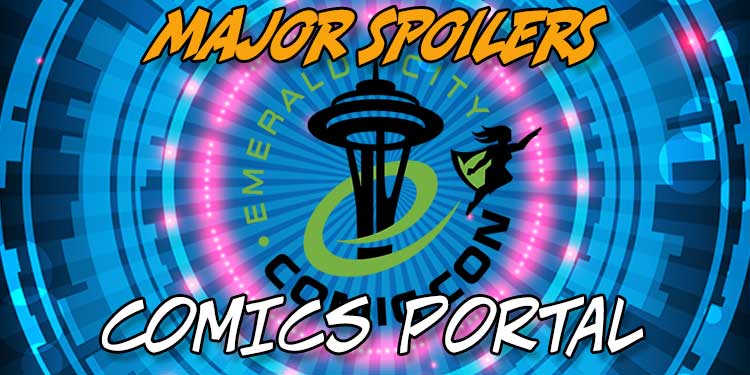 Last week, I mentioned in my column about the Coronavirus and its impact on C2E2. Wow, has a lot happened since then! Several cons have had to shut down or postpone their events, leaving creators reacting, well, creatively!

AT LEAST THREE GATHERINGS DOWN, MORE TO COME? The threat of the Coronavirus has already seriously changed the 2020 convention season, and it’s likely just getting started.

With Seattle, Washington, suddenly finding itself one of the centers for this virus, Emerald City Comic Con (ECCC) had to reschedule from the coming weekend until a date to be determined this summer. The Coronavirus accomplished what many supervillains have failed to do… knock out heroes from meeting their fans!

But they weren’t alone. The London Book Fair in England and SXSW in Austin, Texas, also ended up shuttering their upcoming events as fans and creators alike preferred caution.

I’m not sure we’ve seen the last of these changes, either! A lot will depend on how the Coronavirus spreads and reactions to it.

THE WEEK THAT WAS It was an odd experience this past week as ECCC’s change slowly unfolded.

Richard Rivera from Stabbity Bunny and I were planning on being in Artist Alley there, as were many creator friends. At first, we were all looking forward to heading to Seattle, but as that city began to deal with the Coronavirus, people started pulling out of ECCC on a regular basis. We were going to ship books and other materials to Seattle, but we held off, thinking we could add luggage to our flight instead.

Every day, we checked with friends and growing lists of fans and friends who joined those saying they weren’t going to go. Dark Horse and DC were among the first companies to say they had changed their plans, with others like Scout Comics, Source Point Press, CGC, and Valiant soon adding their names to the list.

Interestingly enough, our contacts ran the gamut of reactions to what was happening. Some pulled out instantly while others said they would not cancel no matter what happened in Seattle.

Eventually, after hearing that the city had asked people to telecommute from home for the entire month of March, Richard and I decided it was better to play it safe, especially given Richard’s health concerns about a year ago. That hurt a lot because we truly love this convention. The strange thing was that our passes to ECCC arrived in the mail that same day.

About a day later, the con sent out a notice that they would be rescheduling to the summer. (I’m sure our decision, at best, was only a very small part of that choice.) The cool thing was that the organizers said we could let them know if we wanted to be included when they set up the replacement summer dates. We did that happily and look forward to getting there in a few months, hopefully.

The bad news was that there is now an ECCC-sized hole in many people’s budgets. Add to that the fact that others were going to the aforementioned gatherings in London and Austin, so those folks were faced with a serious shortfall to start out 2020.

Depending on the creator or the organization, many people are getting creative in ways to fill those gaps. Some are conducting online auctions while others have sales happening on their websites or in social media. Still others are being hosted by local shops to hold events to sell their wares while incurring only a minimum of expenses.

Honestly, this is happening with so many creators in so many locations that I couldn’t begin to be fair to everyone, so you should check with your favorite comics pros via social media to see what they may be doing to offset these circumstances. And please, support them however you can!

Of course, be safe while doing that! I hear more and more people saying that washing your hands thoroughly is still among the best ideas of how to stay well. On the other hand, I’ve seen some people wearing surgical masks even while driving in their cars. I guess if that helps you deal with this whole situation, go for it!

Behind the scenes, creators (like my friend Richard) are trying to reschedule or get refunds for flights or hotel reservations. It’s a tougher process than we’d all like, but with patience and persistence, we’ll get it all worked out.

My favorite bit of news, though, was that some people, after they wore their surgical masks around people who actually had the virus, were accidentally putting them on backwards the next day, making it much more likely they would catch it. Ouch! This has all happened in the short space of a week or two. How this will affect the industry in the months ahead is anybody’s guess.

It’s fascinating to me that this happens after the comics industry has largely accepted comic cons as an important part of making ends meet. I know of several creators who count on con income each year. They truly need conventions at this point.

Again, this may only be the tip of the iceberg. If the Coronavirus continues to spread across the nation, we could see conventions large and small either reschedule or cancel events completely in 2020.

I do take courage when I see how many comics pros are adapting to the situation and coming up with inventive solutions. Granted, it’s going to take more effort and planning on their part to fill these con-sized holes in their budgets, but most fans are pretty devoted and helpful, so I’m thinking this could grow into yearly mini-cons across the world that might appeal to those who can’t make it to the big cons for whatever reason. We’ll see.

Personally, I think ECCC did the right thing to reschedule. This was a proactive stance to take by ReedPop, who runs cons like this one, and fans have appreciated their concern for their safety. It also just makes them look good, in my opinion, and that can be worth more than the money they might be losing in this situation! I haven’t heard if SXSW or the London event are rescheduling, though.

And, as I said last week, I still believe cons are here to stay. They may be wounded and facing uncertainty for the moment, but I think that many of them, like ECCC, will bounce back and be even better when they return!

What do you think? Has the Coronavirus affected your thinking about attending cons? Are you more or less likely to go to a con in 2020? Are you interested in supporting local events that could help creators near you? Please share your thoughts in the space below!