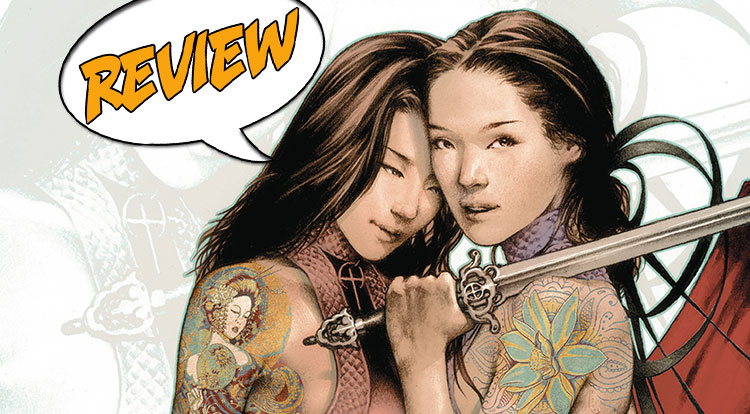 In The Marked #5, from Image Comics, the powers of magic assemble to fight the evil threatening to burst through the Shadowgate.  Mage versus Hybrid Mage, while Mavin faces off against Liza, who is responsible for working to unleash the forces of darkness.  Can this mismatched team of magic users defeat a young woman tapping evil sorcery?  Find out in your Major Spoilers review! Previously in THE MARKED:  The Shadowgate is ready to open, threatening to unleash the forces of darkness on a largely unsuspecting world.  An uneasy alliance between the Marked, the Shangen and the Mages is all that stands between humanity and unending torment.

Let’s cut to the chase.  The Marked #5 is a beautifully illustrated, but on balance, an averagely written comic.  What artist Brian Haberlin and colorist Geirrod Van Dyke have done on the art side of this issue is nothing short of extraordinary.  Sure, it’s a little static, but the painstaking line work, and the beautiful colors have created a world that feels like you could step into.  It feels real and it is gorgeous to look at.

Where the issue goes wrong (and don’t worry, I’m not going to hate on it is too much) is in the writing itself, and the trite ending.  Let’s deal with the latter first.  Young Liza has leagued herself with the forces of darkness, and is working to open the Shadowgate to allow them to rampage across the Earth.  But why would a lovely young thing like herself make such a terrible choice?  Because no one loved her, ever.

Let that one sink in for a little bit.

Evil mages are a dime a dozen in genre fiction.  Some want power to dominate others, like Sauron, or Raistlin Majere from the Dragonlance books.  Others are motivated by an amoral urge to understand the world, like Catalpas in David Gemmell’s Morningstar.  Indeed, some of the great classics of fantasy would be nowhere if it weren’t for a magic-user gone bad.  But at least most of them have a halfway decent reason for turning to the dark side.  And even if those reasons are cliches today, at least they feel believable.

But nobody loves me?  Come on, man.

The other issue with the writing comes down to the way the characters speak.  The static nature of the art doesn’t allow for free-flowing conversations, but that’s what is tried here by writer David Hine.  There’s witty banter, or at least, an attempt at it.  But couple that with the way the art sort of flows, and the tiredness of the lines, and one is left wishing for less chatter, and more beautiful art, to at least make the experience reading The Marked #5 just a little bit better.

CONCENTRATE ON THE GOOD STUFF, ROB

Okay, okay.  The writing isn’t all bad.  Characters like Pope, with his guitar magic, have a few fun lines.  If you read them as if Johnny Rotten were saying the words, it makes the experience that much more enjoyable.  And certainly, Hine’s worldbuilding is interesting, even if the idea of a school for magic has been done somewhere before…I can’t quite put my finger on it.  Hog…something, I believe.  Anyway, Hines definitely creates a sense that the world we are immersing ourselves is much bigger than the confrontation in the warehouse, with the Pentagon getting involved towards the end of the issue.

Also, while I do complain about Liza’s motivations, that’s not to say that Hines is wrong to use that as an explanation for her actions.  I’m sure there are plenty of readers out there feeling unloved, who pine for companionship, and who rail against an unfair world that seemingly without reason has determined that they should be without friendship or love.  It’s a hard life, sometimes, and in depicting that in an unflinching manner, Hines has likely given voice to a great many people struggling with loneliness.

I wanted to like The Marked #5, but kept bumping up against the writing.  There’s a lot of reasonable writing in this issue, but it is let down by some cliches and a villain whose motivations don’t speak to your reviewer.

There’s a lot to like about The Marked #5. The art is fantastic, but it never quite meshes with the writing. While I found the antagonist’s motivations to be lacking, loneliness is an issue that speaks to millions in the calorie free world of social media. A bold, striking issue, with some writing issues, The Marked #5 is a bit of a mixed bag.