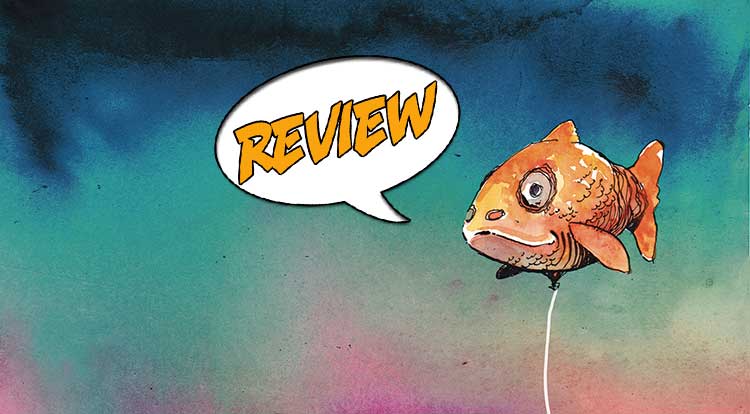 In King of Nowhere #1 from Boom! Studios, Denis wakes up…somewhere.  Denis likes to party, so when he finds himself in the strange town of Nowhere, he puts its stranger inhabitants down to a legender bender.  But things are odd in Nowhere, as Denis very quickly finds out.  And what he finds…well, read your Major Spoilers review to discover what! Previously in King of Nowhere: Denis likes to party so hard he often wakes up in places with no recollection of where he is, or how he got there.  But this is nothing new for him, floating along as he gets his bearings and sobers up.  But what if the weirdness is the new normal?  And who is the fellow with the nailgun asking after him?

HE’S NOT IN KANSAS ANYMORE

I really enjoyed King of Nowhere #1.  A strong opening issue, it features an excellent mystery and some fantastic art.  M Maxwell Prince, that fiendish writer of Ice Cream Man, turns his hand to a more gentler (on the reader and characters) comic, featuring a fellow named Denis who wakes up…somewhere, and can’t remember how he got there.

The man with no memory is a standard trope in fiction, and happily here provides a pretty good mystery to draw the attention of the reader.  What makes this opening issue even more fun is that Denis quickly discovers the town of Nowhere, which he wanders into, is populated by a whole host of strange looking individuals.  A satyr driving a car, fish headed men, a bartender with an upside down face – you get the picture.  Denis thinks all of this is a dream, a happy, fun climb down from whatever alcohol or drugs he ingested the previous night.  It’s a dream…until it turns into something far weirder – his new reality.

Price is just a delight as a writer.  Pivoting from the existential horrors of Ice Cream Man, he turns in a fun, whimsical slice of Americana – a small town, low population, policed by a sheriff, and hosting a cavalcade of the weird and wonderful, all rubbing along just fine.  Except when the giant iguana starts rampaging again – then things turn exciting.  Denis is a low key character, delighted by the strangeness around, welcoming of difference, and just going along to get along.  He’s not angry, or moody, or dismissive.  He’s an all round good egg, thinking that what he’s seeing is simply a dream, and that when he wakes up, everything will be normal again.

Except for the time being, the town of Nowhere is his new reality.

Tyler Jenkins’ (Black Badge) art won’t be unfamiliar to many readers.  He takes his cues from Price very well, creating a world that could be a dream.  The oddness of it all – the fish headed man I mentioned before, the bartender with the upside down face, are presented as if normal, set against a normal background of a bar in a small town somewhere in middle America.  It’s that very prosaicness, that gives the story its power and reinforces the dreamlike quality.  Hilary Jenkins’ coloring is also deserving of mention.  Coupled with Tyler’s loose inking, the colors in King of Nowhere #1 are splashed around, outside the boundary of the art, presenting its own dreamy palette.  If there’s one thing I hope readers take from this issue, it is the high quality art on display.

Price might’ve put to one side the ghastliness of Ice Cream Man, but that’s not to say there aren’t moments of darkness in King of Nowhere.  He carefully doles out the mystery of what has happened to Denis, and where exactly he has ended up.  While an expansive reader might guess what is going on, fresh mystery is added at the end of the issue, with the appearance of (inspired I think by the villain in No Country for Old Men) the nailgun wielding character.  His appearance adds a welcome layer of menace to the whimsy, and introduces an antagonist to watch.

King of Nowhere #1 is a fine opening issue to a promising story that has a number of intriguing elements. The character work, particularly Denis, but even the bit part characters like fish-headed Jed, is entertaining. The art, by the Tylers, is a particular standout, and perfectly complements the looser storytelling that Prince brings to the table. I, for one, am greedily looking forward to the next issue.