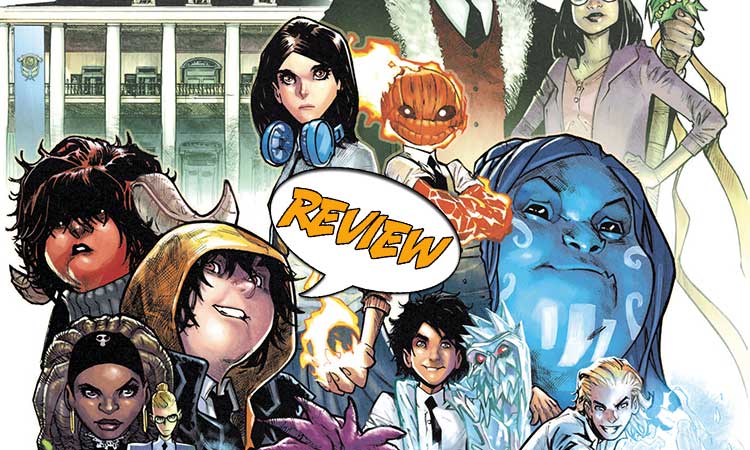 Magic has returned to The Marvel U, and with it a whole bunch of new, young,  wielders of the mystic forces.  Someone should really make a school or something. Your Major Spoilers Review of Strange Academy #1 from Marvel Comics awaits! Previously in Strange Academy: The Marvel Universe has mysteriously changed in such an alarming way that Doctor Strange has done what he’s avoided for decades: he’s opened a school for young sorcerers.

Class Is In Session

In the first pages of Strange Academy #1, we’re introduced to Emily Bright, a young girl who has had magical powers since she was a baby.  She has sent Doctor Strange a letter asking for help after she managed to ward off her dog’s death.  This has led to other unusual things happening to her.  This ultimately leads to Zelma Stanton coming to her aid as a tree tries to kill her. Afterwards she invites Emily to a new school that has just opened up for magic users.  After her parents agree, Emily is whisked away to New Orleans and is brought to The Strange Academy. There she is introduced to her fellow students: a fairy from Otherworld named Shaylee Moonpeddle, Iric and Alvi from Asgard, a frost giant named Guslaug, Dormammu’s son Doyle, and a host of others.  The students get a tour of the school grounds that culminates with them getting their dorm assignments and meeting the faculty.  Along with the standard staff of Brother Voodoo, Zelma, The Ancient One, and Mindful One, they’re also introduced to the guest professors that will be dropping in from time to time: Hellstrom, Nico Minoru, Scarlet Witch, Magik, and Shaman.  Finally, the class is introduced to Doctor Strange, who appears with a monster called a throzil in tow.  The Sorcerer Supreme has their first lesson for them, defeat the beast.

A Mix of Real World and Harry Potter

Anytime there’s a new property involving magic and a school there’s going to be comparisons to Harry Potter.  And while they are there in Strange Academy #1, so far they’re pretty superficial.  There’s a magical school, a faculty of strange and weird teachers, and a student body to match.  After that though the comparisons end, at least so far.  What this really reminds me of is the early seasons of The Real World on MTV. There appears to be a real effort to try and fill the cast out with characters that have inherited grudges against each other. For example, the siblings from Asgard obviously have tension with the frost giant student and Doyle Dormammu has a grudge against apparently everyone due to being the son of well, Dormammu. And while this setup might be a little trite, what is nice about this issue is that Skottie Young so far has decided to take a more lighthearted and humorous approach to this situation, rather than a teenage, angsty, drama approach. While the students are clearly the focus here, the faculty doesn’t just fall to the wayside and their almost nonchalance about all the wild stuff happening around them at the school is pretty fun to read.

A Perfect Choice For Artist

For me, Humberto Ramos’ is the epitome of hit or miss and that often comes down to just how exaggerated he gets with the human form.  But, for my money, there’s no better artist to handle a lighthearted book about a diverse group of teenagers. Thankfully, he doesn’t get too wild here with proportions or dislocates any jaws.  Also, he does a wonderful job at using every piece of a character’s design to help inform the reader about them. Along with Humberto’s art, Edgar Delgado’s colors makes Strange Academy #1 a vivid and visually impressive book.  On top of all of this, there’s some great lettering work by Clayton Cowles on display.  There’s a real effort to try and give each student their own unique voice via font, size of the words, and color of the text, they’re all nice touches.

Something that I kept coming back to time and again while reading Strange Academy #1 was how this is the sort of bright, lighthearted, and fun book that I was drawn to when I first started reading comics. And while there are some things here that may be enhanced by a deeper knowledge of the Marvel canon, I don’t see any reason why this couldn’t be given to a first time comic reader, especially if they’re Harry Potter fans, or have a passing interest in the MCU. Really, my only complaint is that the whole “let’s put opposing personalities together on purpose” is a bit overdone.  Thankfully a good tone helps alleviate this.  Skottie Young, Humberto Ramos, Edgar Delgado, and Clayton Cowles really come together here to make something, well, magical.  4.5 out of 5.

Strange Academy #1 achieves something that not a lot of first issues can do: It manages to be appealing to both longtime readers and to people new to comics. A diverse cast of characters, a familiar setup, and bright, vivid art mixes here to create a book that has a little something for everyone.