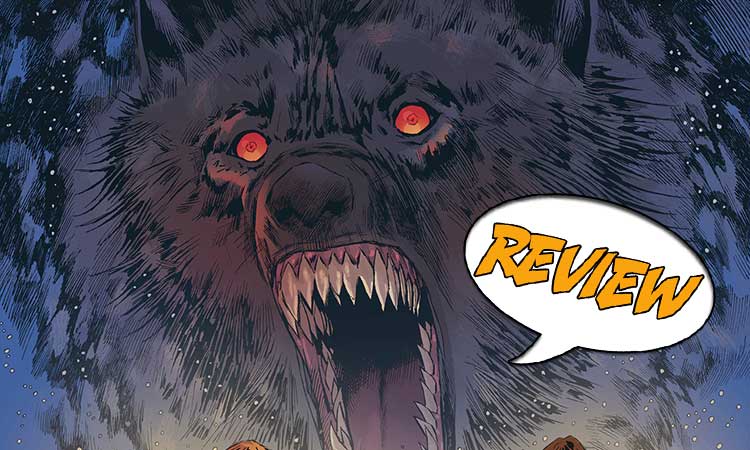 The strange writing and an even stranger dream lead Wellington to investigate the mine by day. What secrets lurk in the dark below ground? Find out in Wellington #3 from IDW Publishing! Previously in Wellington: Sela has stopped by Olivia’s house to warn all therein that the Devil is on the loose. It’s late; they let her sleep in the kitchen and everyone goes off to bed, including Wellington, who has a strange dream of being down in the mine where he speaks to a headless man who is inscribing a magic circle in blood. He awakens and hears a dog in the night. He grabs his sword to investigate. He follows a strange tapping noise that leads him to the stable, where the body is laid out. And there he finds a strange young lady who draws back from the iron in his sword – and who has large dark eyes, and the hind legs of a doe. She tells him that the man who lies there dead did not die naturally. He opened a rift between worlds, and he did this by sacrificing a child.

A PAIR OF UNUSUAL LADIES

As Wellington #3 opens, Olivia has come to the stable, and Arthur introduces the young woman as his goddaughter. Olivia berates him for his midnight escapades. Further questioning is saved for the next morning, where Kitty is surprised by the supposed goddaughter from out of the blue. The young woman says she came here to help, which raises some eyebrows; that is not something a lady would do. She “reminds” Wellington that they need to go to the mine.

Wellington leaves his man, Fitz, at home with the ladies. As he and the young woman (I do not recall her name off hand, which is perhaps one issue with the book. It sometimes would be convenient for the reader if people would occasionally call one another by name) head for his carriage, Sela joins them and won’t be left behind. They get to the mine, and Arthur begs the women to stay behind. Neither of them do. I like them and their confidence in their arcane knowledge.  They explore and find themselves in the cavern Arthur dreamt of the night before. The women immediately recognize the circle on the floor as a summoning circle. The dead man was attempting to summon a demon. His wife and child had died during the childbirth, and he was trying to bargain to get them back. Instead, something else came through.

The black dog shows up and attacks. At first Wellington’s sword passes through it as though it is immaterial. Sela attacks with her knife, and Wellington is now able to slash it across the face. It turns and runs away through a passage or portal that closes behind it, leaving them facing a cavern wall. This is strange enough, but when they go back to the house, Kitty and Fitz are in their rooms, recovering from a misadventure where their horses spooked and ran off. When Wellington goes to see Fitz, he sees that Fitz has a slash wound across his face, exactly like the wound he gave the dog.

Sela insists that they must have a séance over Fitz that night to find out what is going on. They do this, joining hands around the beside as Sela chants. Momentarily they see the shadow of a dog before Fitz wakes up and is justifiably incensed to find strange people in his bedroom doing strange things around him. It is another late night, and they all head off for bed. And the following morning, someone is no longer with them.

THE REAL AND THE UNREAL

The biggest impression I got from the art in Wellington #3 was the contrast between daytime and the familiar world, and nighttime/dark when the strange things happen. Obviously, the atmospheric contrast between natural daylight and the shadowy light of flickering torches establishes this handily. But two women Wellington brings with him are not just ordinary, and in the darkness of the cave and of the séance, they come into their own. The young woman who looks meek during the day looks tall and strong by night. Sela looks like a somewhat nutty little old lady, but she is utterly in control at the séance.

I like Wellington’s determination. I appreciate that he started out as a skeptic, but now as he sees things that are incredible, he adjusts to them and incorporates them into the world he knows, all the while realizing full well that he has to keep quiet about them. The magical may be real, but most people have not experienced it, and he doesn’t want to be thought mad.

Wellington #3 is not high-action adventure, although a lot has been going on over the past few days when you think about it. It’s an immersive horror story that is meticulous in its details about time and place.

A supernatural black dog and an unspeakable sacrifice are part of the mystery Wellington tries to unravel.