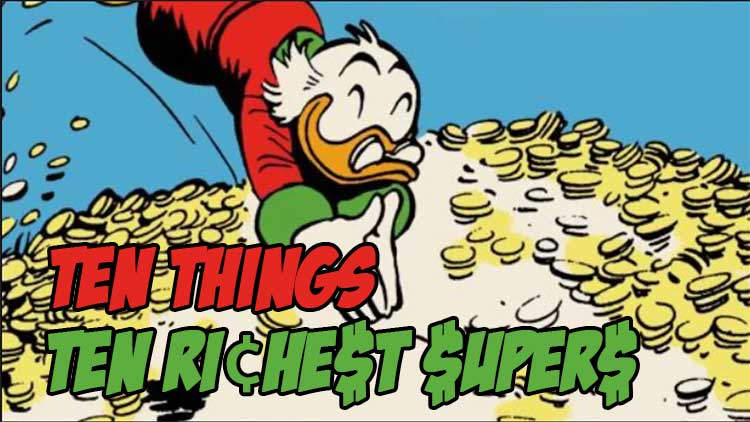 Sure, lots of fictional characters are rich… but are they SUPER rich? Welcome to Ten Things: Ten Richest Supers!

Whooshman-Bicarbonate Films, in conjunction with An Amateur Comics Historian and the $14.98 in my checking account, Presents: Secretly (or at least as secretly as the world’s most wealthy pre-teen can be with no mask or attempt to cover his distinctive dome) Richie Rich, the boy who throws priceless jewels around like they’re made of candy, Rippy is ostensibly the sidekick to Crashman, aka the Rich family’s faithful majordomo Cadbury. He’s actually the brains of the outfit, as well as the checkbook for their gadgets and gimmicks. Richie initially created their identities to entertain sick and needy children, which makes one wonder why he doesn’t just help out their families financially. Oh, well, teach a man to fish and all that.

(Though sometimes appearing in a comic titled ‘Super Richie’, he doesn’t use that alias in-story.) A group of extraordinarily rich children, The Green Team appeared only once before falling prey to cancellation during ‘The DC Implosion’ of the 1970s. Commodore Murphy, J.P. Houston, Cecil Sunbeam and Abdul Smith are so flush with cash that the ENTRY FEE for their gentleboy’s club is a cool million bucks (which adds up to just about $5.2 million in the year 2020) and are part of an exclusive group of characters who appeared in ‘Cancelled Comic Cavalcade‘ circa 1978. Their book was relaunched in 2013, but it lacked the goofy joy of Jerry Grandenetti and Joe Simon, and just rolled off the end of the pier.

The team’s special jumpsuits contained gadgets, survival gear and a quarter million dollars of walkin’ around money that they probably just forgot about at the end of any given mission. The Cure of Intelligence, Karen Minazuki would like to speak to your manager. No, wait, I’m sorry, I’ve gotten her confused with Karen, the meme. When she’s not being Cure Aqua, Karen is the president of the Student Council, using her popularity to her advantage to help improve their school out of costume. Having been raised by her butler, much like poor little Richie Rich, she misses her parents greatly and is secretly a very lonely girl. Thankfully, the comradeship of her fellow Cures helps, though she still has some anger issues that might stem from such a solitary childhood. Born of the richest family in the world, all of whom are named for various pieces of underwear for some reason, Trunks is the son of Vegeta, one of the power players of the Dragon Ball series. His grandfather, Dr. Brief uses his vast wealth to fund scientific research and tinkering, while Trunks is kind of a cocky jerk about it all. Spoiled by his doting mother, he focuses his energy on training and upholding the Saiyan birthright that his daddy gave him.

Full disclosure: I though his dad, Vegeta, was the pickle-lookin’ dude, but apparently, that guy’s name is Piccolo. One of the smartest and deadliest men on the planet, Alexander Luthor is a self-made kajillionaire whose wealth comes from his various inventions. Having been raised in the worst, most poverty-stricken parts of Metropolis (in this continuity, anyway), Lex is one of those rare characters who gets away with pretending not to be the amoral, murderous jackwagon he truly is. He even spent some time in the ranks of the Justice League post-New 52, using his money to build a battle suit to put him on even footing with the likes of Superman without making a dent in his fortune. The former New Mutant called Sunspot, as well as one of many to wear the mantle of Citizen V, Roberto da Costa’s most formidable power is his confidence, followed by the ridiculous wealth of his family’s enterprises. When A.I.M. became a problem for the Avengers, Bobby literally bought them out, turning the mad science coalition that had vexed so many heroes for so long into his personal think-tank. When the Avengers splintered, he funded his own team, first calling themselves the New Avengers, then getting official government status as the U.S. Avengers, all under his explicit command and control. Let’s see Captain America pull THAT off. The leader of the Super Young Team, one of the premier super-groups of Japan, Heino Okata describes his role in the team thusly: “I have the greatest power of all… I am so rich, I can do anything.” Headquartered on his own private island, Most Excellent Super-Bat’s most notable adventure came when he found a conspiracy designed to undermine Japan’s economy…

…so he BOUGHT his homeland, defeating the nascent financial crisis. Japan’s real world wealth totals around 25 billion dollars, and he spent that the way I might splurge on a cheeseburger at Wendy’s. How rich is Charles Francis Xavier? Private jet rich? Sure. Huge compound in upstate New York rich? Absolutely. Made somebody invent a hover-chair when he lost the use of his legs? Yep.

But beyond that, he’s so rich that he sent out a group of brash, reckless teenage idiots on super-hero type missions where explosions, cannons or his old metal-crushing friend might attack, driving a Rolls-Royce Silver Cloud. When your disposable car is a hand-crafted vehicle worth the present-day equivalent of half a million bucks, you’re not the kind of person Jeff Foxworthy would make fun of. How wealthy is Goldie Gold? She owns her own media conglomerate, and rather than run it or anything boring like that, she travels the world with her handsome boyfriend seeking out adventure and exclusive scoops just because she wants to. She one-ups Professor X by gold-plated her Rolls’ detailing and out-does Richie Rich by not quietly mocking all her friends about how much money she has and they don’t. Besides, if you can make billions in print, you’re clearly some sort of genius, even back in the 1980s.

Plus, she fought snake-people one time!

The greatest candymaker in a world where a new candy bar fascinates the entire world and sends the royal family into a tizzy, Willy Wonka must be rolling in dough, simply because of the army of OHSA engineers and inspectors he would have to pay off to run his business the way he does. Wry, sardonic but never completely cynical, he’s also generous enough to give the whole thing away to one special kid in the hopes that the joy of a Wonka bar will outlive him. Given the lack of safety precautions in his factory, it’s kind of a given that it will.

Thanks to Faithful Spoilerite J Michael T (@J_Michael_T) for this week’s topic. Feel free to follow along @MightyKingCobra for more Ten Things madness on Twitter! As with any set of like items, these aren’t meant to be hard and fast or absolutely complete, if only because “Rich Idiot With No Day Job is one of the most common superhero day gigs and people are already lining up to comment that I forgot Iron Man and Batman. Either way, the comments section is Below for just such an emergency, but, as always: Please, no wagering!