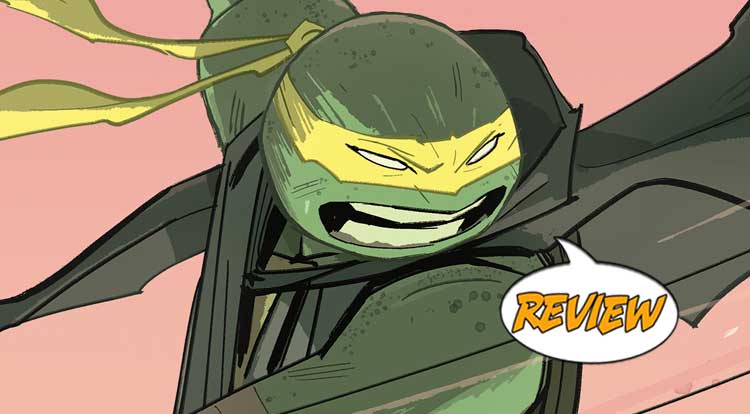 The newest turtle takes to the streets, but can she be the ninja the city needs?  Your Major Spoilers review of Teenage Mutant Ninja Turtles: Jennika #1 from IDW Publishing awaits! Previously in Teenage Mutant Ninja Turtles: Jennika:  Trying to acclimate to life as a mutant, the newest Turtle Jennika embarks on a solo adventure that will force her to come to terms with both her troubled past and conflicted present.

A NEIGHBORHOOD FULL OF MUTANTS

After a large chunk of New York’s population was mutated by the machinations of evil folks, Jennika has become an unofficial protector of the mutant neighborhood. When she sees a rabbit-person making a run for another part of town, she naturally follows him, trying to convince him to stay in the safe zone. For a moment, things look grim, as Vincent the rabbit-man is caught in a trap, but thankfully, it’s only Jennika’s sorta/kinda ex Casey Jones, which leaves Jenny far too aware of her new reptilian body. After finding that Vincent was only trying to retrieve his drumsticks for a musical gig, Jennika ends up attending. The punk rock music reminds her of her younger days, but a pair of overly agressive moshers end up on the wrong end of her two-fingered fists. Once she comes to her senses, she finds another ex, this one now turned into a weasel (which is a total warning, I swear), a boy named Silas. She’s not willing to listen to anything he has to say, until he says the magic words: His friend is trying to steal a mutant cure.

NOT ONE, BUT *TWO* AWKWARD EX REUNIONS

It does seem a bit coincidental that Jennika would run into the ex who abandoned her years ago in a random club, but the story quickly moves past that and delves into what she was like before she was a ninja or a turtle. There’s also a lovely, quick backup story telling a tale of her days in prison and her admiration for (SPOILERS) the late Master Splinter, which gives us even more insight to her worldview. The addition of a new turtle to the crew is never going to be easy, but this issue helps to define her as more than just “the girl”, and provides some very nice art from both Revel and Anishijima. The use of flashbacks that parallel her current situation are really cool to look at, and with the exception of a few of the faster-paced action sequences, everything looks great. There are some issues with the expressions of the animals, but even the complicated process of making a rabbit look like he’s sneering and calling Jennika a “karate narc” works the majority of the time.

BOTTOM LINE: IN FOR THIS SERIES

The best part about the issue is that, even though I missed a few issues of the main TMNT title, everything here is clear and easy to understand, and the story takes the time to get inside our main character’s head, giving us insights into how (or perhaps IF?) she’ll fit in with the rest of the squad. Teenage Mutant Ninja Turtles: Jennika #1 is a good number one outing for her, with a few storytelling wobbles but nothing that derails the enjoyment of the issue, earning 3.5 out of 5 stars overall. I’m glad to see IDW giving this book a slew of alternate covers and really hyping it up, as Jennika’s presence has the potential to be the best kind of game-changer.

I like seeing more of Jennika's past, but some of this issue's events feel a bit contrived. The art is quite good, though, and I want to see where this story is going.