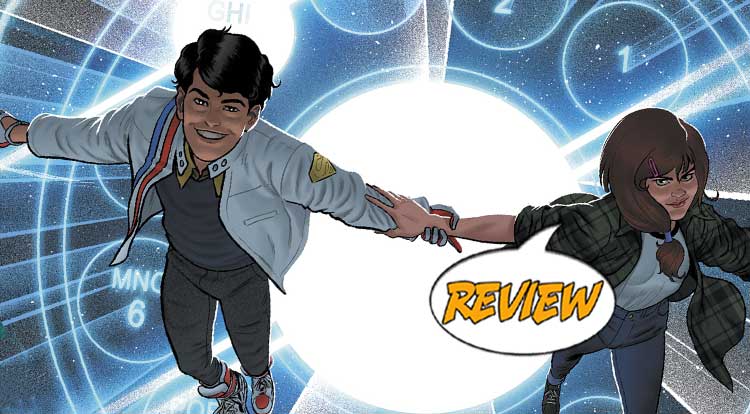 It’s time to dial F for Finale!  Your Major Spoilers review of Dial H For Hero #12 from DC Comics awaits! Previously in Dial H For Hero:  Miguel must face his most dangerous opponent yet: himself!  With the fate of the Multiverse hanging in the balance, Miguel must battle his literal dark side.  Will he and Summer survive the experience?

And will the power of the H-Dial be lost for-ever?

THE UNIVERSE IS AN H-DIAL

At the end of last issue, Summer and Miguel were trapped in a (UGH) K-Hole, with no chance of getting home, leaving Mister Thunderbolt to combine the four H-Dials and finally reshape the entire multiverse in his image. Worse still, Thunder Montez, one aspect of Miguel is helping him to do it. All seems lost…

At least until Summer reminds Miguel of something her father used to tell her: Even when it’s darkest, there’s always hope! Just as the villain combines the CMYK dials (I love that joke), Summer and Miguel return from the black-and-white in forms resembling Olive Oyl (with Popeye’s arms) and Krazy Kat, ready to throw bricks at evil. Whatever they’ve unlocked keeps transforming them, moving through the various ages of comics (a 40’s-style Robin, a Mary Jane Watson-inspired transformation, even a identity inspired by Elfquest) and manage to turn Mister Thunderbolt back into plain old Robby Reed. While Miguel finally makes peace with his own dark side, Mister T makes one final transformation that leads to his final doom.

A VISUAL HISTORY OF COMICS INCLUDING AT NO CHARGE!

One of the joys of this comic has been seeing characters inspired by various eras of comics, pulps and cartoons like Super Friends, and this issue follows through on that while getting away from the superhero identities a bit (transformations based on ‘G.I. Joe’, ‘Howard The Duck’ and even ‘Love And Rockets’ save the day.) The never-quite-hidden theme of this series has been about the history of comics, and the fact that Mister Thunderbolt’s final form is based on Doomsday shouldn’t be lost on readers, nor is the fact that his defeat comes at the hands of hope itself. There’s even a joke about the fifth Chromium Dial, which made me snort out loud, and the final reveal that our heroes are going to make a go of a life in Metropolis feels like perfect embodiment of hope. The art is once again phenomenal throughout the issue, including effects designed to mimic the printing processes of comics past, and I’m utterly stunned (and a little bit jealous) of how versatile Joe Quinones has been throughout this series. His is a name that I’m going to be looking out for in the future.

BOTTOM LINE: AN EXPLOSIVE ENDING WORTH YOUR TIME

In short, Dial H For Hero #12 pulls off an ending that balances the Silver Age sensibilities of the Dial H concept with a very modern take that manages to encapsulate the traditional aspects of superheroes-as-wish-fulfillment with real human themes and metatextual teaching moments, making for a truly enjoyable 5 out of 5 stars overall. I understand why this series was a limited, and don’t want to see them stretch it too far beyond it’s means (Miguel has already been seen in ‘Young Justice’ to have kept access to an H-Dial, which worries me), but I hope that Humprhies and Quinones are immediately scooped up for something new that will showcase their vast and versatile talents. We haven’t seen the Shadowpact lately, have we?

I couldn't have asked for a better ending for this series, and the art is utterly perfect throughout. You really should be reading this book.