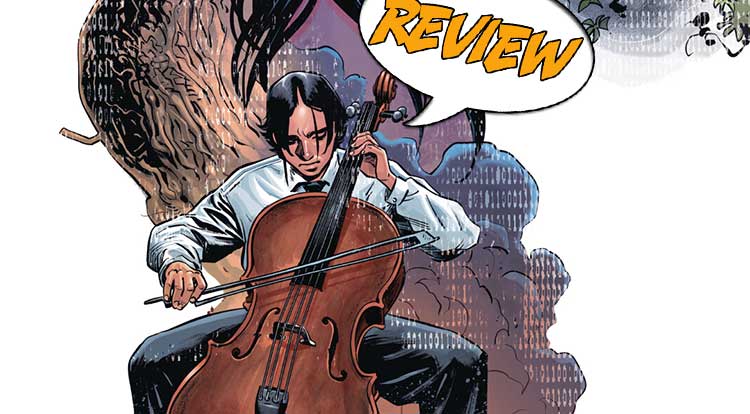 In Tomorrow #1 from Dark Horse Comics, Trevon Treacy fights computer hackers for the government.  He’s brought in to deal with a computer virus that has jumped species – to humanity!  Oscar is a brilliant cellist and neuro-typical.  He only keeps it together thanks to his twin sister, Ciro.  After the virus kills their mother, can Oscar cross a collapsing American and reunite with his sister?  Find out in your next Major Spoilers review! Previously in Tomorrow: It was all going so well.  Civilisation, that is.  Sure, humanity had its problems, but what generation didn’t?  Technology was on the march, people were living longer, happier (if slightly more neurotic) lives.  Things were good.  Until they weren’t.  Until a Russian hacker devised a computer virus so fiendish, so overwhelmingly malevolent, it jumped from computer systems to humanity.  And then everything wasn’t going so well.  Horribly, in fact…

In the light of the Covid – 19 outbreak, I recently read an excellent article about the 1918-19 outbreak of the Spanish Flu.  Though, when I say excellent, what I really mean is horrifying.  Reading Tomorrow #1 is a little bit like probing a sore tooth with your tongue – you know you shouldn’t, but damn it, you want to nonetheless.

End of the world scenarios are a dime a dozen.  Nuclear war, zombies, aliens, fungal infection, the flu.  Stephen King’s The Stand is still the north star of this sub-genre, though more recent works, such as Wanderers by Chuck Wendig, bring the trope into the modern day.  This sort of storytelling wouldn’t have traction if we all weren’t aware of the possibility of the end of the world brought about by a pandemic.  A few years ago, it was Ebola, thanks in part to the runaway success of Richard Preston’s The Hot Zone twenty years before.  But we’ve all had the flu, been off work or school sick with it.  We’ve all seen the reaction of authorities to the Covid – 19 outbreak, and wonder uneasily if we should be raiding the local supermarket to stock up on essentials should the virus mutate again and increase its mortality rate tenfold.  I know I have.

So what I’m saying is that Tomorrow #1 falls on fertile soil.  Overall, it doesn’t do anything really interesting with the elements at hand, assuming you ignore the one innovation which is that the pandemic was born of a computer, not natural, virus.  That in and of itself makes for potentially interesting plotlines later in the series, but for the moment, Tomorrow #1 is interesting, but not groundbreaking.

Regardless, it does handle the usual tropes well and with great efficiency.  Characters, such as cellist Oscar, come to life under the skilful handling of writer Peter Milligan.  Neuro-typical, Oscar doesn’t feel emotions like the rest of the population, and his journey home across a disintegrating America promises to be one disaster after another.  Elsewhere, Milligan has created characters who fulfil the requirements of that plot – be they dead parents, or mouthy teenagers, or a computer engineer who may play a part in finding the cure.

As much as the writing doesn’t rise above what is usual for the genre, the art, by Jesus Hervas, is good, without pushing the boundaries too much.  He gives us what we expect – close up scenes of the dying and the dead, chaotic hospitals overwhelmed by an endless parade of the dead, and widescreen shots of mass carnage as city-scapes are reduced to carnage, populated by victims of the virus, and opportunists looting at every turn.

The thing about end of the world stories is that your reviewer tends to find the lead up to the destruction the most interesting bit.  Harking back to The Stand, it’s not the slightly delusional good versus bad latter half of the book that caught my interest but the heavy dread infused first half that terrified me.  Fear the Walking Dead, at least its early stages, was far more frightening than its progenitor.  Society has basically been frozen for a very long time – not since the Second World War, if not the carnage of the First, has there really been a situation where the ties that bind have been swept away.  We’ve all grown up (in the First World at least) in a time where stasis is the norm, not upheaval.  We don’t worry about where our next cooked meal is coming from, or furrow our foreheads about the cleanliness of the drinking water, or whether, if the rule of law utterly collapses, if our slightly odd neighbour will give into his raging impulses and threaten our families.  That’s the real terror of the end of everything.

Which is a long way of saying that while interesting, Tomorrow #1 isn’t that engaging or frightening.

The end of the world comes in the form of a computer virus, which is the only real interesting element in an otherwise entertaining story that doesn’t really attempt to do anything different with elements we’ve all come to understand. Milligan and Hervas work well together to craft a world on the precipice of total collapse. Hopefully, the rest of the series works hard to engage the attention of its readers.