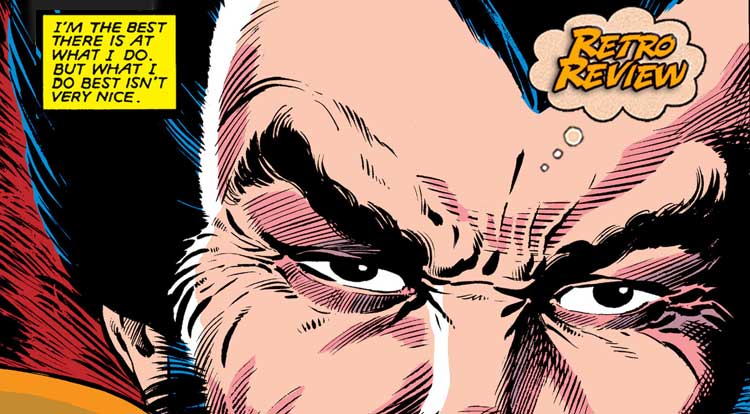 He’s the best there is at what he does, and what he doe…  Whoa.  Anybody else having deja vu?  Your Major Spoilers (Retro) Review of Wolverine #1 awaits! Previously in Wolverine:  Initially created as a one-shot antagonist for the Incredible Hulk, the mutant eventually known as Wolverine might have fallen into obscurity had his creator not been a part of the All-New All-Different X-Men team the next year.  The Claremont/Cockrum crative team didn’t do a lot with the character, as Cockrum favored his own creation, Nightcrawler, but a change in creative led to Wolverine getting more attention thanks to new artist John Byrne, who liked the idea of a Canadian superhero, being from Canada himself.  A switch from blue-and-yellow to a two-tone brown costume gave our hero some gravitas and the revelation that he spoke fluent Japanese and had been a world-traveler added mystery to his backstory.  After an adventure in the Savage Land, Wolverine fell in love with a young Japanese woman named Mariko Yashida, whose family may or may not be one of Japan’s biggest crime cartells.  (It depends on the writer.)  Either way, we pick up not long after their unconventional relationship has begun. This story opens with the first instance of Wolverine saying “I’m the best there is at what I do, but what I do best isn’t very nice.”  His ritual combat with a Canadian Grizzly seems vicious at first, until he reveals that he’s putting the bear out of its misery after being poisoned by an unethical hunter, after which he tracks down the hunter and beats him for his evil deeds.  He then turns his attention to Mariko, whose recent actions have puzzled him.  His old friend Asano, who is still in the spy trade, lets him in on the secret: Mariko is married!  Her father has returned from an extended absence and arranged a marriage to pay off one of his debts.  It’s not news that Wolverine wants to hear. Frank Miller isn’t always to my tastes, but that shot of Wolverine in the final panel, with the brown’s of his costume turning blood red under the lights is pretty impressive.  I mean, I hate the shape of the cowl, but it’s a really cool shot.  Wolverine makes his way across Tokyo to the Yashida compound, where he finds Mariko and insists that she explain to his face what is going on.

He quickly regrets it. Once again, the art makes a powerful moment of drama even more so, espeically the four-panel sequence showing Wolverine’s rage coursing through his body.  She shows him her family’s Masamune-forged blades, explaining how centuries of tradition and honor have forced her to do as her father says, but the arrival of her husband interrupts his response.  Wolverine moves to kill the man, but is felled by poisoned throwing stars, awakening in the presence of Lord Shingen, Mariko’s father! If Logan wishes to win Mariko’s hand, reasons Shungen, then he won’t be afraid to face a harmless old man in combat to prove his intentions and his honor.  The combination of Shingen’s skill and the poison gives the crime lord the uppor hand, allowing him to strike Logan over and over, hitting pressure points designed to cripple… or to kill. The old man takes Wolverine down with relative ease, and he awakens in an alley near the Ginza, certain that he has lost Mariko forever.  When a gang of toughs attack, intending to steal anything of value he has, it seems that Logan’s life is finally over…  until a series of blades come out of the shadows to save him.  Wolverine #1 is one of those books that changed the focus of the comics industry, leaning hard into the popular “ninjas and Japanese culture” elements of 1982 but doing it with skill, a careful story and some impressive art, turning a character who was once the least interesting X-Man into one of the most popular superheroes in history, and it rightfully earns 4.5 out of 5 stars overall.  I’m not a particularly big fan of this character, having lived through the era(s) where every character had weird hair and strange claws, but it’s impossible to not read this book and get engrossed in Claremont’s story and Miller’s exciting linework.

Not every super-popular comic book lives up to its reputation, but this is the rare case where it actually exceeds it.