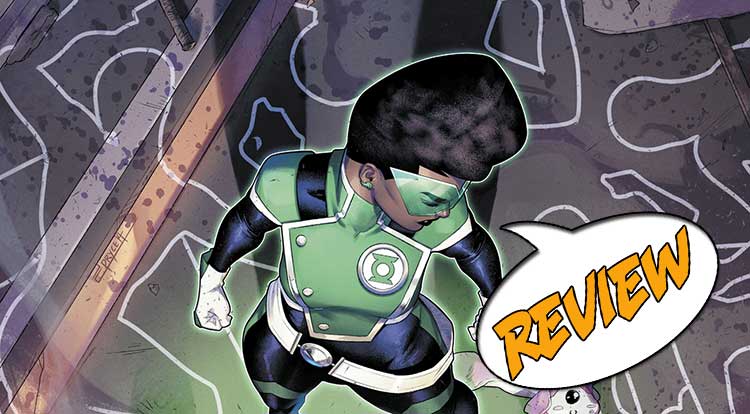 The City Enduring is at the brink of full scale rioting and it’s police force isn’t helping the matter.  Only Green Lantern Sojourner “Jo”  Mullein can keep it all together, but it’ll take more than a ring to do that.  Your Major Spoilers review of Far Sector #4 from DC Comics, awaits! Previously in Far Sector: The City Enduring, a massive city housing three different races has had its foundations rocked by a string of murders.  Also, a large portion of the citizens wish to abandon the “Emotion Exploit” the tinkering with their DNA that causes them to not feel emotion. This portion of the population has come into direct conflict with another portion who fear the abolition of the exploit.  As both groups protest, the Peace Division, the city’s police, open fire.

Far Sector #4 beings right after Jo  has saved as many of the protesters as she could from the Peace Division.  After the initial barrage she confronts the police officers and destroys their heavy weaponry. She issues some threats about not killing anymore protesters and leaves to help others.  After leaving another Peace Division officer arrives and passes on some information about Jo’s unique power ring onto the current commander.  Jo finally gets a chance to meet with the family of the original murder victim and is shocked to learn that his wife supports getting rid of The Emotion Exploit. Afterwards Jo goes to confront the council who apparently ordered the shooting of the protesters. There they reveal to her that the reason they ordered the attack is because that method of handling dissent has worked in the past. Twelve times to be exact.

Interesting but Flawed Take On The Green Lantern Powers

It’s been hinted throughout this series that Jo’s ring isn’t like the other rings in the corps and here we finally get our explanation why.  Instead of requiring a charge via a lantern like the other members of the corps, Jo’s ring self charges but does so slowly over time. It’s a clever way to get around some of the normal hiccups that we see in other GL books.  The problem though, is that this different ring setup feels a little unnecessary at this point and there isn’t much reasoning behind it within the context of the story.  Rather it comes off as a deliberate change to the ring in order to setup a specific event in the story. Perhaps a more reasonable explanation is coming, but as it stands this change in the power ring capabilities feels more utilitarian than organic. The ring issues aside Far Sector #4 has some of the most powerful moments of the series so far.  Jo’s conversation with the murder victim’s wife and her explanation for supporting the elimination of The Emotional Exploit is well thought out and understandable.  Also, Jo’s confrontation with the council is chilling.  Finally, we get a chance to really see Jo show some spine and get a sense of her grit when she threatens The Peace Division.

Far Sector #4 is chock full of powerful, character driven scenes and unsettling realizations. So much effort is given to make sure all the players in this story are given depth and motivations. Where it falters though is when it tries to insert some more backstory and explanation for the differences in Jo’s power ring.  The way Jo’s ring works feels more in service to the story than an outcome of an ongoing world outside of these pages.  4 out of 5.

Far Sector #4 has an overabundance of stellar interactions between characters. It’s these scenes that more than make up for the questionable tinkering with the green lantern powerset.