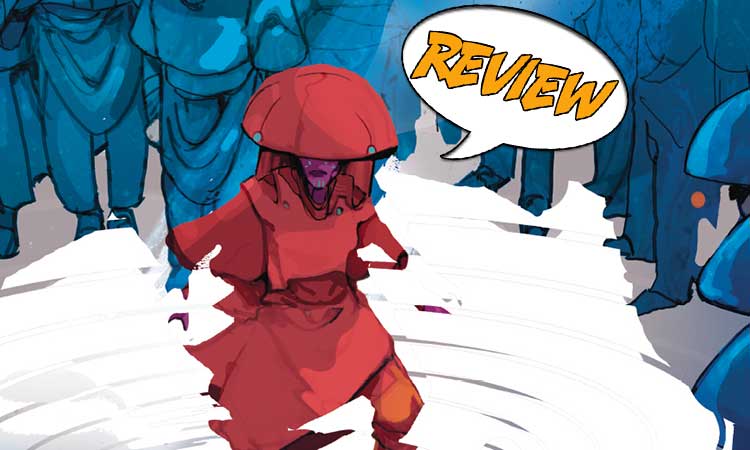 Amazingly, Grix survives her minutes in space, but now it’s a tense stand off between the crew of the Sundog and the Riveteers. Who will blink first? Find out in Invisible Kingdom #10 from Dark Horse Comics! Previously in Invisible Kingdom: The Sundog, Grix, and her entire crew were captured by Riveteers. To complicate matters further, a damaged Lux ship also gets pulled in. Grix’s plan to ally with them fails when they realize who she is, but she is bound and determined to get her people free. She sends Eline, with Vess, to go to Captain Turo and see if he will let her retrieve a few personal items from their ship. He will – but he doesn’t need to dock with the ship for that. Vess steps in, admitting that she’s going through her Awakening and she needs herbs from the ship to suppress it, and they need to dock. The plan works, until Grix realizes Vess was left alone with Turo. This leads to the Riveteers becoming aware of their plan. In the standoff, Grix is left in the boarding ramp, and as the Riveteers detach it, Vess telepathically tells Grix to jump into space; that she can protect her just long enough…

A LEAP OF FAITH

Invisible Kingdom #10 opens with Grix adrift in space, a backdrop to Vess’ meditation, as the crew of the Sundog watches, powerless to help. It’s a heck of an opening. Last issue, Vess told her to make her way to the airlock. This time she tells the crew just when to open it. Grix regains consciousness in sick bay, and the first thing she sees with her damage eyes is a blurry Vess.

As the rest of the crew tries to bring the power back online, the Riveteers hail them, wanting to negotiate the release of Turo, who is still unconscious. They delay, and Turo slowly comes to, just as the Riveteers hail again, ready to pay almost anything for him. Meanwhile, the Lux traders have been trying to get a signal out and back to the home planet of Duni. They get a private frequency to Mather Prime, the director, and say the know the present location of Grix.

Finally, Grix has a chance to talk to Vess about what’s been happening between them. Roolian sex, during the Awakening, is incredibly intense, heightening both partner’s emotions and responses. Vess feels deeply for Grix but struggles to remain true to her vow. She has sacrificed deeply for it and continues to do so. It’s a deep and thoughtful conversation and a heart wrenching emotional struggle that ends beautifully in a kiss.

And then Grix is called to the bridge. She feels her crew will fall apart if she’s not there to give them orders, and she makes it to the bridge as they are arguing with each other, and Turo, over what to ask for his ransom. Grix decrees that there is no ransom. They will send him back, and they will leave. Telling the truth about Lux and the Renunciation did not trigger any sort of response – no backlash, no revolution. All it has done is cause trouble and all they can do is try to get away from it.

And then a huge Lux ship arrives, with Mather Prime on board. Grix tells her crew to get a pod to send Turo back and gives the orders to head out into deep space. This is goodbye to everyone and everything they know. They could be free – but at what cost? And then something truly surprising happens.

THE WORDLESS BEAUTY OF AFFECTION

The art of Invisible Kingdom #10 is almost ethereal in its beauty. This is a stunning book. The lines may be simple, but they capture the emotions of the characters. Every line is important, and there is so much power in them. The interactions among the crew have a good amount of humor in them; we can see that these guys were never prepared to be on the run, much less revolutionaries. In contrast, the interactions between Grix and Vess are amazing. We can see the connection between them that has been growing despite Grix’s ignorance and Vess’ resistance. The moment that they share a kiss, the Glow lights up around them, and it is so romantic.

It almost hurts us as much as it hurts them to have to pull away and get back to the present problems. There’s a terrific page where Grix is talking with the Riveteers. This is over a communication screen, so their faces pixelate a bit. Then the screen dims and their eyes widen. (I love seeing a reaction like this before seeing what they react to.) And then we see the Lux ship, sleek, modern, huge and sinister. It makes Lux, and by association the Renunciation, look like an unstoppable enemy.

The story in Invisible Kingdom #10 is deftly told and beautifully illustrated. We care for this little band of characters, and what hope we’ve had for them has dwindled steadily as the complications keep getting bigger.

Grix and the crew of the Sundog are running out of places to hide.