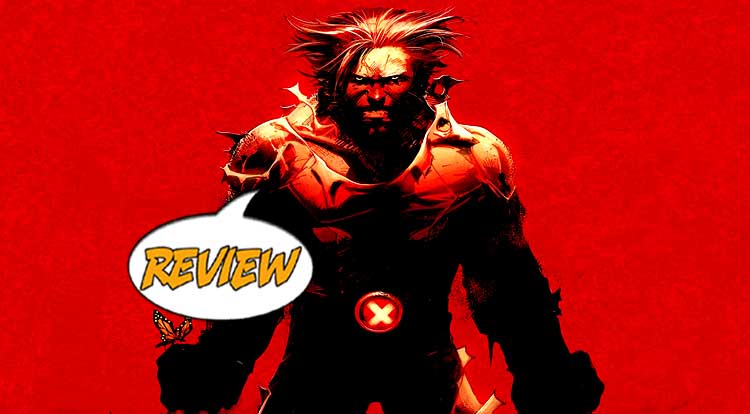 He’s the best there is at what he does, and what he does is come back from the dead! Your Major Spoilers review of Wolverine #1 from Marvel Comics awaits! THE ORDER OF X

Our story opens somewhere in Alaska, as Wolverine revives from a terrible battle, only to find himself surrounded by the bodies of his X-Force comrades… all bearing the wounds of his own claws. We jump back several days to the island of Krakoa, where all mutants are living in harmony, with an uncharacteristic sequence of Wolverine playing hide-and-seek with local children. When Jean Grey arrives to pull him away, they have a nice moment, followed by Wolverine bonding and having a drink with Cap’n Kate Pryde. Kate has bad news about the pollen that they X-Men have been selling to humans to cure all their ills: Someone, somehow, has been stealing it. As he investigates from Krakoa, a human policeman is doing the same from the other side, making for a back-and-forth narrative that interlocks and leads Wolverine and his team to the Alaskan wilderness and the clutches of The Pale Girl. In a SECOND full-length story, Omega Red arrives on Krakoa to take advantage the mutant amnesty, only to find that Wolverine doesn’t trust him. It quickly becomes a Hannibal Lecter-style game of cat-and-mouse, as Omega sends Wolverine out into the streets of Paris to figure out whether or not he is actually a murderer. (Spoiler: He is, but he didn’t do the particular murders Wolverine is worried about.) In so doing, Logan runs afoul of a group of vampires, dusting the one he believes to be their leader, only to find that the Vampire Nation is now as united as the Mutant Nation… and their leader is a very familiar face. *coughDraculacough*

The return of the most popular character in Marvel history deserves a triple-sized extravaganza, it would seem, and this issue packs a LOT into its triple-sized pages. We finally get into the head of the mutant least likely to accept paradise, finding that Wolverine may be back from the dead and different, but he still knows that he’s a monster whom no one can trust. It drives the narrative of the entire issue, from unraveling the mysteries of the Pale Girl to figuring out how much of a threat Omega Red still is. (it’s not “zero”, for certain.) That level of self-doubt is actually a good thing, as the group-think of the X-Men is (intentionally) making Krakoa seem like a frightening island of Stepford Mutants. Both of the big story hooks (a united nation of vampires and the hijacking of the mutant drugs that they’re using to negotiate with the outside world) are big-picture problems, so I’m a bit confused to see both of them introduced in the same issue. Either one of these problems could drive the first year of the book, making this issue feel like two different Wolverine books launching at the same time. As for the art, Wolverine fans should be overjoyed to see Adam Kubert back on the pencils in the first half, delivering on the quiet moments as well as the horrifying sequence of his friends’ dead bodies. I actually like Bogdanovic’s moody style more, especially the sequences set in the catacombs under Paris. The backgrounds are occasionally a little sparse, but the mood and tone are top-notch.

Still, this issue ends up being a bit jumbled, with two different stories seemingly launching two different major arcs, which blunts the effectiveness of both. Still, Wolverine #1 ends up getting more right than not, relaunching the X-Man with a dozen names into the universe at full-speed, delivering on violence, quiet moments and action well, with two different but effective art teams at work, earning 3.5 out of 5 stars overall. It’s not every day that “too much of a good thing” is one of the biggest problems with a debut issue, though, so we should all take this one as a win, especially fans of Wolverine’s classic solo adventures.

SIXTY PAGES of Wolverine, with two big story hooks in play to bring the best-known X-Man back into the fray, with solid art and a lot of first-person narration. It's a pretty good start...