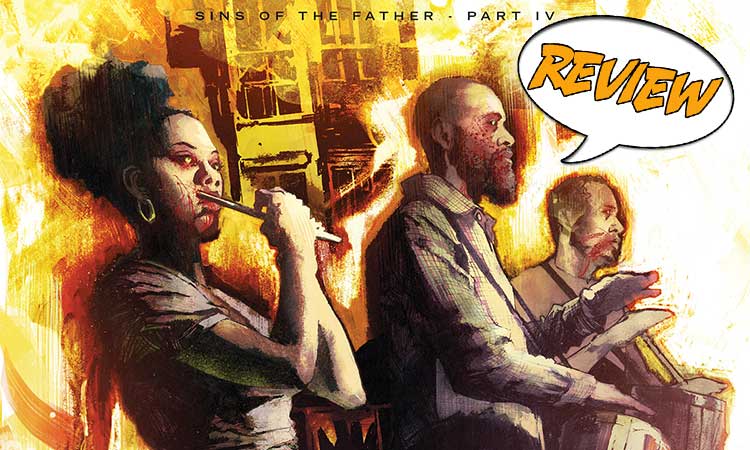 John Adams sets his plan in motion, and the vampire revolution begins, consuming Philadelphia in its bloody carnage. Is there anything J.J. and Jose can do against the tides of death? Find out in Killadelphia #4 from Image Comics.

Previously in Killadelphia: We learn more about John Adams and his plan, as a vampire, to spark a new revolution and create a better system of government for his people (or rather, vampires). His wife, Abigail, has also become a vampire and works with him, although she has some of her own ideas. James and J.J. Sangster work with Jose to kill what vampires they can, but their relationship can rapidly devolve into conflict. Meanwhile, the young vampire Tevin has been thinking about what Adams is doing and finds he no longer agrees, not out of any change of heart, but because he believes it’s based on a flawed foundation.

THE REVOLUTION IS HERE

The revolution has started, and it is bloody. Killadelphia #4 opens with Adams thinking about the current vampire action and contrasting it with the American Revolution. He wonders briefly what the victims will feel but realizes it will not matter. He knows there will be resistance but is confident that his plan, three hundred years in the making, will triumph. His studied coolness against the backdrop of violence and horrified death makes a repulsive contrast.

J.J. and Jose have to wait until sundown until James can join them again. As they idly talk about the city and in what areas the vampire might lurk, something about the train station catches J.J.’s eye. The vampires are attacking in numbers beyond what they expected. The race home to where James awakens. And he’s hungry.

The Adams’ have an unexpected ally – the Mayor is with them as they have the TV on, watching Philadelphia burn. The Mayor has ordered the police, etc., not to engage. But why has the Mayor joined with the vampires? He shares his resentment at the neglect the city has had from the State, from the Feds. In his eyes, the city was already dead, and having it in more obvious death throes is a good thing.

James needs to get out to find some blood. He pulls open the door and Tevin is there. He wants to talk. Tevin wants some honesty from the older policeman. In trade, he agrees to help him calm his hunger. Tevin catches a rat for him. James asks him why he isn’t with Adams. I love this dialogue. Tevin wants freedom – real freedom and shares his realization that a new system built on the same roots as the old system runs the risk of not changing anything. I’m not saying that Tevin’s idea is hugely better, but it is heartfelt and makes sense.

J.J. and Jose have time to talk, and they share some background and find they have in common the loss not only of family, but of closeness with that family. J.J. and his father see in each other things that remind them of the woman they both lost. Jose was supposed to enter a convent but ran away at the last minute. By the time she was found, her parents had both died as the result of a car accident. Guilt sits heavily on each of them.

This is a bleak story, and it’s deep. It reminds us that the American Revolution left a lot of people out. It reminds us that we, as people, are doomed to repeat the mistakes of history if we don’t try to learn from them. And it is a solid reminder that we cannot simply ignore groups of citizens of our country.

A CITY IN ASHES

The cover of Killadelphia #4 is brilliant, a take on the classic painting The Spirit of ’76. This dark reflection of the original succinctly captures the heart of this book. It is calm compared to inside the book as we see the start of the attack. There are several terrifying and bloody panels on the subway, moments captured as though they are seared in memory. But the page showing the train station is really terrific. The palette for the city is predominantly gray tones, and in the establishing shot, there is just a hint of red at the doors. In alternating panels, we draw closer to J.J.’s face, and focus in on the red blur of the doors. As the windows crack, he realizes (and we realize) what he’s seeing. It’s brilliant and chilling.

There’s something creepy about how the vampires mainly just look like people, except for their eyes. They have golden eyes that really stand out against the strong inks and shadows. I like their variety, as they range from looking pretty normal, similar to what they must have looked like in life, to having very stylish looks, perhaps related to the time they became vampires. Abigail Adams is fascinating, having somewhat of a bondage fetish look about her while also appearing utterly confident and in control.

BOTTOM LINE: A VAMPIRE STORY FOR OUR TIMES

Killadelphia #4 continues to challenge and horrify. I really like that there are a few vampires who can think for themselves, and it’s more than just Adams. This adds a cool dimension, as we don’t know how well they’ll be able to challenge him.

The Vampire Revolution begins in Philadelphia – is there any hope for humanity?