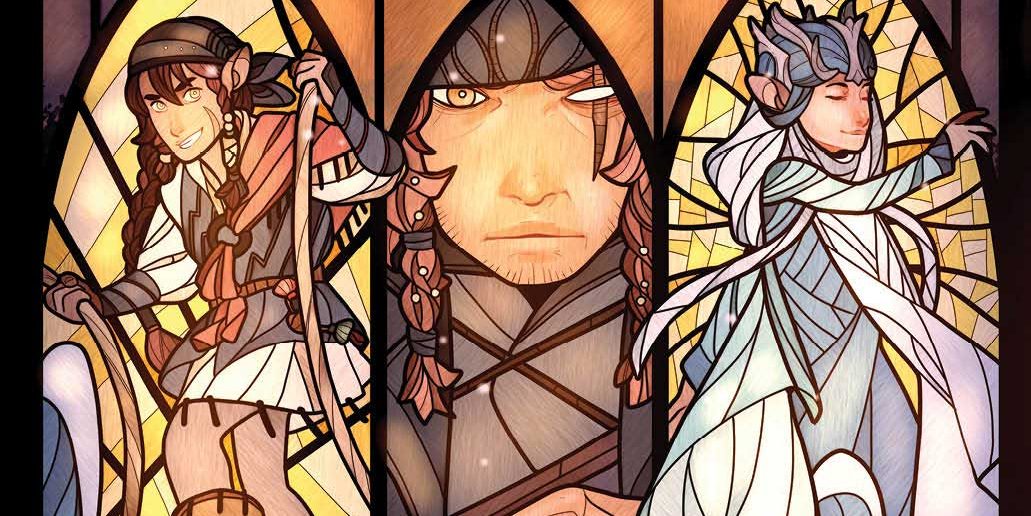 BOOM! Studios announced today a brand new creative team for the next story arc of JIM HENSON’S THE DARK CRYSTAL: AGE OF RESISTANCE, a twelve-issue comic book series based on stories from Netflix series The Dark Crystal: Age of Resistance writers Jeffrey Addis and Will Matthews, introducing the untold histories of key characters from the show, and featuring explosive events tying into the critically acclaimed Netflix series from The Jim Henson Company, The Dark Crystal: Age of Resistance. JIM HENSON’S THE DARK CRYSTAL: AGE OF RESISTANCE #9, available in May 2020, begins an all-new arc presenting the origin story of All-Maudra Mayrin, Gelfling leader and pivotal character from the acclaimed show The Dark Crystal: Age of Resistance, presented by a new creative team of writer Matthew Erman (Long Lost) and artist Mi-Gyeong Jo (Beastlands). Mayrin takes her place as the leader of all Gelfling clans, but she feels unprepared for the great responsibility before her. When whispers of a Gelfling rebellion reach her, she must decide who she can trust—and if she herself is truly worthy of this responsibility.

Matthew Erman is a comics writer from Columbus, Ohio. Alongside Lisa Sterle, he co-created the critically acclaimed comic horror series, Long Lost, which was optioned for Film/TV by Producer Jenny Klein (The Witcher, Daisy Jones and The Six). Since then, he’s worked with IDW on a new Care Bears: Unlock the Magicseries as well as Vault Comics on his upcoming original graphic novel Bonding, with artist and co-creator Emily Pearson. His short work can be found in anthologies such as Corpus (2018), Dead Beats (2019), and Everything is Going Wrong (2019).

“The Dark Crystal: Age of Resistance is a woven tapestry of creative genius and I, somehow, got to add my own thread. The comic series has built on the incredible foundation of the Netflix series by expanding the world and the characters we all fell in love with,” said writer Matthew Erman. “I’m so excited for everyone to read the story of the newly crowned and young All-Maudra Mayrin and her bizarre and emotional journey in Thra’s Silver Sea! Getting the opportunity to show who Mayrin is and being trusted by BOOM! Studios and the Jim Henson Company to really scour her depths as a character was an honor and delight. I can’t wait for everyone to see this.”

Mi-Gyeong Jo is a comic artist and illustrator based out of Seoul, Korea best known for her work on the original comic book series Beastlands.

“This story shows a whole new aspect of the All-Maudra Mayrin. I’m so excited to illustrate Mayrin’s early adventures as a young, brave but untested Gelfling leader,” said artist Mi-Geyong Jo. “I really enjoyed illustrating this adventure on Thra, and I hope fans enjoy coming on this journey with me.”

The Dark Crystal is the groundbreaking 1982 film directed by Jim Henson and Frank Oz, featuring never-before-seen puppetry in a fantasy adventure about a young Gelfling who embarks on a quest to save his world from the vicious Skeksis by restoring the lost shard of the broken dark crystal. A prequel television series, The Dark Crystal: Age of Resistance, premiered on Netflix on August 30, 2019.

JIM HENSON’S THE DARK CRYSTAL: AGE OF RESISTANCE #9 (OF 12) features a main cover by illustrator Mona Finden and a variant connecting cover by artists Kelly and Nichole Matthews (R.L. Stine’s Just Beyond).

“Whether the All-Maudra is a villain or a hero in your story, she is inarguably one of the most important figures during the Age of Resistance who left an indelible mark on Thra and changed the course of Gelfling history forever,” said Matthew Levine, Editor, BOOM! Studios. “Matthew Erman and Mi-Gyeong Jo bring to life the epic origins of the complex and powerful leader, All-Maudra Mayrin, in this new story arc that shows us a young Mayrin just as she comes to power and what happens when unexpected events test her worth.”

JIM HENSON’S THE DARK CRYSTAL: AGE OF RESISTANCE is the latest release from BOOM! Studios’ ambitious Archaia imprint, home to graphic novels such as Bolivar by Sean Rubin; Mouse Guard by David Petersen; Girl in the Himalayas and New World by David Jesus Vignolli; Jane by Aline Brosh McKenna and Ramón Pérez; Persephone by Loïc Locatelli-Kournwsky and licensed series including Lev Grossman’s The Magicians by Lilah Sturges and Pius Bak; Jim Henson’s The Power of the Dark Crystal and Jim Henson’s Labyrinth: Coronation.

Print copies of JIM HENSON’S THE DARK CRYSTAL: AGE OF RESISTANCE #9 (OF 12) will be available for sale on May 27, 2020 at local comic book shops (use comicshoplocator.com to find the nearest one) or at the BOOM! Studios webstore. Digital copies can be purchased from content providers, including comiXology, iBooks, Google Play, and Madefire. A softcover edition of JIM HENSON’S THE DARK CRYSTAL CREATION MYTHS: THE COMPLETE COLLECTION is now available in bookstores everywhere.

For more on JIM HENSON’S THE DARK CRYSTAL: AGE OF RESISTANCE and more from Archaia, please visit www.boom-studios.com and follow @boomstudioson Twitter.