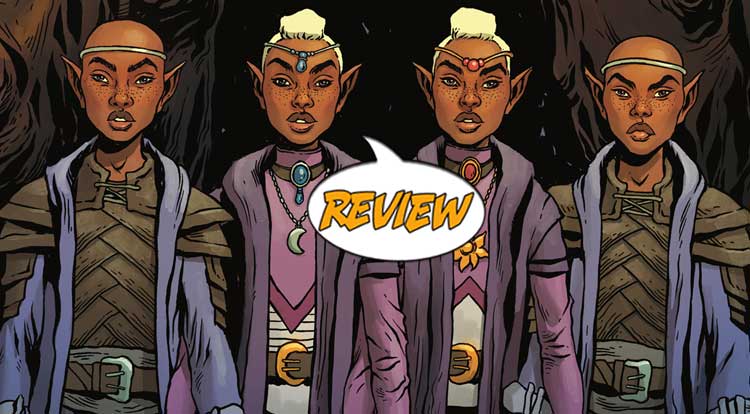 Dungeons and Dragons: A Darkened Wish #5 (of 5) Review

Legendary heroes return…  but can they turn the tides of war?  Your Major Spoilers review of Dungeons & Dragons: A Darkened Wish #5 from IDW Publishing awaits! Previously in Dungeons and Dragons: A Darkened Wish:  When war threatens the Moonshae Isles, legendary heroes return to defeat the forces of an unthinkable foe.

Our story begins with a dragonborn, walking into a cave under a caption that reads “The Last Day.” The rest of his party follows close behind, arguing whether or not he can be saved, before wading into a battle. Aiden, who is referred to as “a pirate king” and seems to be the party rogue, breaks away to meet the dragonborn, Skadaurak in battle, angrily telling him that he’s ruined all their lives. The fight goes in his favor, until a burst of dragon-breath ends it decisively in Skadaurak’s favor. The sorceror, Helene, steps up for her chance and quickly over-powers him with her mystical might, only to have a mysterious man arrive to congratulate her on her victory. He is Asmodeus, the source of her new powers, and things are about to get bad. Skadaurak is transformed into a giant dragon to attack the rest of the party, killing some and forcing Helene to kill him. When she discovers that she was the prize Asmodeus wanted all along, she remembers the name of the book and intones the fatal words: “I wish we’d never met.”

WALKING INTO THE MIDDLE OF SOMEONE ELSE’S GAME

As a matter of preference, I usually read any given comic book once without context, to see how I might respond to it if I found it on the stands. This one has a big advantage in Tess Fowler’s art, which lovingly renders all the party members (not all of whom get named in these pages, at least, not obviously so), their weapons and spells beautifully. The sword-fight between Aiden and the dragon is really well-done, especially the look on Aiden’s face when his strike fails to kill and he realizes he’s about to get his face broiled off. The downside comes in the feeling of being thrown into the final chapter of an ongoing narrative without any context, “what has come before” page or even a roll-call, which makes it difficult to engage. The excitement of this climactic chapter still works, even without that context, and Helene’s final, terrible choice carries emotional weight even if you haven’t read the previous chapters of this story, which is impressive.

In short, part five of five is a tough place to jump in, and while the art does a great job in keeping a reader engaged, Dungeons and Dragons: A Darkened Wish #5 would have greatly benefitted from a recap page or a even a simple list of party members, but still pulls off the ending and made me go back and read the previous issues, earning 3.5 out of 5 stars overall. If you’re into the high-fantasy and really want it to be set in the recognizable D&D worlds, with the recognizable races, classes and powers, this book is absolutely for you.

I don't really know what's going on, but there's some really great art and a couple of moments that manage to be meaningful, even without context, making for a pretty good (if context-lacking) read.