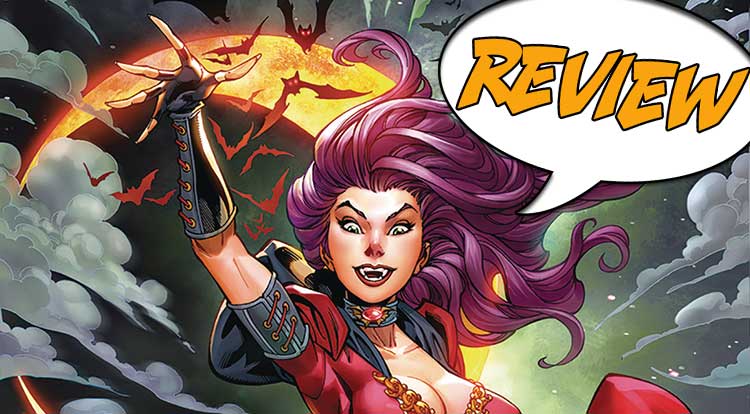 Van Helsing Versus the League of Monsters #1 Review

In VAN HELSING VERSUS THE LEAGUE OF MONSTERS #1 from Zenescope Entertainment, a secret facility deep in China holds creatures of the night, creatures that Van Helsing has captured.  But darkness never gives up, and when Dracula arrives to break the monsters free, it sets up a confrontation for the ages!  Will Van Helsing live or die?  Find out in your next Major Spoilers review! VAN HELSING VERSUS THE LEAGUE OF MONSTERS #1

Previously in VAN HELSING:  The daughter of Bram Stoker’s famed vampire hunter, Liesel Van Helsing has followed in his footsteps, slaying the creatures of the night. The disaster of the previous arc has left Van Helsing reeling, but the denizens of darkness know no backward step.  Now, with the shadows gathering, can Van Helsing see her way to the light?

VAN HELSING VERSUS THE LEAGUE OF MONSTERS #1 is big, bombastic fun.  A collection of vignettes introducing and re-introducing characters from the Van Helsing mythos, this opening issue leans heavily on the grandiose, the bloody and the violent as it sets out its stall for the rest of the mini-series.

Working on a story developed by four others, writer Raven Gregory hasn’t so much written the opening chapter of a story, as moved characters, both fair and foul, around a chessboard, setting them up for confrontation after confrontation.  Vampires, werewolves, jacked up fiends, and cobbled together undead, all feature.  Dracula is an urbane, suit wearing technocrat, assiduously assembling allies in his efforts to finally kill the daughter of his old nemesis.  VAN HELSING VERSUS THE LEAGUE OF MONSTERS #1 is an old school example of assembling both sides of the same conflict, with the end result no doubt being  an old school battle royale.  Artist Deivis Goetten, in a demonic concert with colorist Robbie Bevard, tear apart a swathe of prison staff – limbs and blood fly in an almost orgiastic feast of destruction.  It’s stomach churning without being off putting.  On the flipside, their work together brings a whole host of different characters to life.  Julie Jekyll, in her Hyde persona, is a truly monstrous figure, in all senses of the word, dominating the panel and wreaking havoc.  Similarly, the werewolf character Lycaon is a massive brute of a man, made even worse when depicted in his beast form.  There are a lot of great character moments brought to life by the art.

This issue is told with verve and more than a little bombast.  Characters spend less time talking to each other, and rather talk passed each other as they mightily declaim their plans and intentions.  Which mostly involve carving people up for food, vengeance, or both.  The massacre in the prison facility which opens the issue is a masterclass in bloody violence.  In fact, while there is a little bit of introspection from some of the characters, there is far more combat and violence throughout VAN HELSING VERSUS THE LEAGUE OF MONSTERS #1  It’s a case of turning off your brain for twenty minutes while you jump on board for a rollercoaster ride of good old fashioned comic book violence.

The other side of having all this action and character introduction is there is little time to check the motivations of everyone.  Dracula is a vampire, Lycaon a werewolf – ergo, they’re evil by default.  Vengeance is a decent enough motive, but it’s a little bit stale as well.  Granted, this is the opening issue, so one hopes for a little less light, and more shade, to flesh out the characters beyond their genre roots.

There’s enough going on in VAN HELSING VERSUS THE LEAGUE OF MONSTERS #1 to draw your reviewer back for the next issue.  There are problems with the characters, insofar as they’re more cardboard than flesh and blood.  That said, the issue is full of color and movement, and doesn’t pull any punches.  It is true to itself – it isn’t trying to be something it isn’t, but it could do with trying just a little bit harder to be something it hasn’t been before.

Van Helsing Versus The League of Monsters #1

VAN HELSING VERSUS THE LEAGUE OF MONSTERS #1 doesn’t rock the boat in terms of originality. It’s hard to think how you might do something new with this assemblage of characters and tropes. The best one can hope for is that the creators handle the elements with care, and don’t simply trot out variations on a theme.