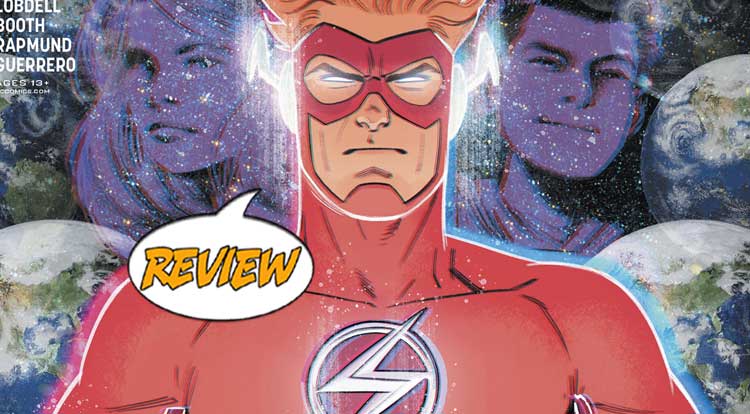 Wally West has found his lost family, but can he save them AND the nultiverse?  Your Major Spoilers review of Flash Forward #6 from DC Comics awaits! Previously in Flash Forward:  Wally West must make the toughest choice of his life: save the day, or save his family.  With the crack in the Dark Multiversal barrier reaching critical mass, Wally’s mettle will be tested in ways the young hero has never seen before…

Having found his missing children, Jai and Iris, at the end of last issue, Wally West opens this issue with some heartfelt bonding time, unaware that Tempus Fugitive is watching from afar with some bad news. The worlds of the Dark Multiverse are created from fear and regret, and thus his kids’ exile on the strange dark world is actually his own fault, a terrible dystopia built from The Flash’s fears that he couldn’t keep his family safe. Even worse, because of his Flash powers (somehow), the world keeps correcting itself before it can be destroyed. In short, the creeping tide of Dark Matter that he has been fighting is actually his own fault. In order to keep this from happening again and destroying the whole world, Wally West has to sit in the legendary Mobius Chair, whose combined knowledge will force out any conscious memory of his family, allowing them to go home but wiping out his memory of them. His response: “Let’s do this, you son of a bitch.” Iris and Jai are shunted home to Earth-0 to be reunited with their mother, while Wally gets a new blue ensemble and sets out into the universe…

…until another entity bonds with him and makes something entirely different.

…FOR AS LONG AS HE COULD KEEP IT

I know that it’s hard for the solicitation and preview material to not give away huge plot points in advance, but this outcome was very obviously shadowed before the first issue even came out, which really blunts the emotional impact of Wally West giving up the thing that he loves most in order to save it. Add in the nonsensical choice to have Doctor Manhattan appear and bond with him (with has also been spoiled by preview material) and you get an issue that is maddening in how thoroughly it negates the previous five issues worth of story. As much as I enjoy the idea of Wally West returning and his metaphorical trolley problem, the execution just makes it frustrating. Worse still, Booth’s art isn’t up to the task of showing a happy father and kids, making what should have been a warm, meaningful reunion into a symphony of sharp angles and bizarre eye placement. Iris West’s face is horrifying when she smiles, which makes it difficult to enjoy the intended cuteness of the family reunion. (The fact that Doc Shaner, who has done the covers of every issue, could have pulled this off easily is another “What Might Have Been” moment of Flash Forward.)

As someone who really didn’t like ‘Heroes In Crisis’, where this arc of Wally’s life began, I wanted to give this series a fair shot and not let my biases color what was being described as an important stepping stone to a new chapter of this Flash’s life. Flash Forward #6 pretty much wrecked that plan, delivering on awkward and obvious dialogue, art that is completely unsuitable and an ending that bothers me as much for the parts I saw coming as the parts I didn’t, earning 2 out of 5 stars overall. This series is a very real example of how “dark” does not immediately mean adult, rendering Wally’s journey through the multiverse meaningless in a few quick pages. I’ll be interested in seeing where the West/Osterman/Mobius hybrid goes from here, but you could read the first pages of issue #1 and the last pages of this book and get the same effect.

It is nice to see Linda and her kids reunited after so long, though, so credit to the creators for making that sequence work.

There are a couple of lovely character moments, but overall this issue feels telegraphed and forced and Brett Booth is absolutely the wrong artist for any story based on displaying emotions.