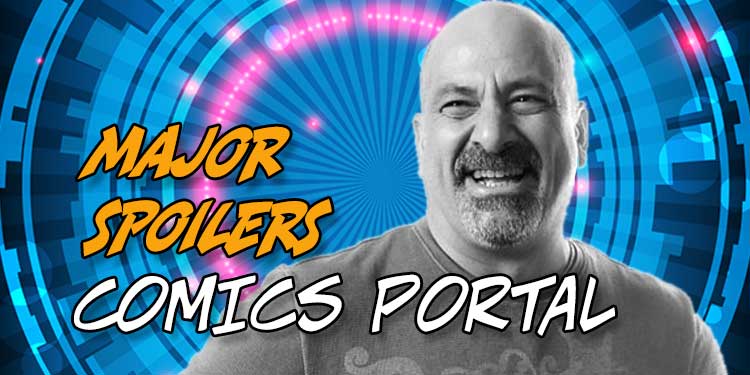 As of this writing, comic book fans are coming to terms with the departure of Dan DiDio from DC Comics, who served as the co-publisher for the company for 18 years. Where will DC go from here? What lead to the decision to remove Dan DiDio from DC Comics? We honestly don’t know.

What saddens me is that some of the comics press is trying to guess and fill in the blanks while passing this off as fact. I’ve pretty much only seen rumors and conjecture. I hope DC and/or Warner Bros. will clarify things soon, but until we get some real, official word, we shouldn’t indulge in guesswork.

I have seen comics pros posting on social media about him, some wishing him well and appreciating what he had done for them, while others are celebrating this change.

Dan DiDio is one of the most passionate people I know when comes to this medium. He loves comics with every fiber. He was also an early champion of my work. He backed me on black mirror when others didn’t want it to happen, then on court of owls, American vampire… on and on.1/2

I’m buying the least amount of DC Comics in my life. At least 50% of that reason is the way Didio reshaped them. Awful! So glad he’s been removed! I speak as a consumer first.

I expect this will likely continue for some time to come. The very first time I encountered DiDio was at a Baltimore Comic Con just after he joined the company. Prior to that development, the DC panels at that event (and others) had been sparsely attended, and there didn’t seem to be much enthusiasm for the product they were putting out. I was still a fan, though.

Since we didn’t have anything to do the hour before the DC panel, my brother and I went to the room it was scheduled for and got good seats, just like we usually did. We did notice this time, however, there were a lot more people already there than we had seen attending in the past.

In fact, when the panel started, the room was packed, and there was overflow out into the hallway with people wanting to get in somehow. That was new.

DiDio ran the panel, and that was when I first heard his trademark laugh and enthusiasm. Many of the creators pointed to him and his excitement about comic books for what they saw was a change in fan interest.

After that, I always found him anxious to talk with fans and to hear what they thought. Later on, I found out that he was working with creators behind the scenes at Baltimore and other cons to make things happen. Sadly, I unsuccessfully tried to interview him for my podcast several times, but I knew he was a busy guy, so it didn’t bother me much when I was told he didn’t have time.

I didn’t always agree with his choices while at DC, of course. Just last week I talked about the fact that I didn’t think DC should once again be changing their timeline. However, I took comfort in the idea that they were at least taking chances. I personally know several fans who felt all of what he had done should be scrapped and return DC to how it was previously.

His biggest success likely was the debut of the “New 52.” There were lines outside comics shops waiting to get the new releases back then. For a while, DC even sold better than Marvel, although that didn’t last long. DiDio also apparently spearheaded the Wal-Mart Giants, which seem to be a big success. I’m glad the local shops are selling a lot of them now, though.

It’s time now, however, to look ahead.

First thing of importance is to figure out who, if anyone, will be co-publisher or even publisher. My vote is to somehow get Geoff Johns into this role. As much as I adore Jim Lee’s art, I’m not certain he’s the best choice for publisher. He does attract large crowds wherever he goes, but I think someone else might do a better job of steering DC as an organization in the years ahead. Mr. Lee could always draw whatever story Johns wants to tell, of course! Other than Johns, I just don’t know who would be a good choice for publisher. Whoever it is, I hope that person will be someone the fans can interact with easily, and even be enthusiastic about comics. Maybe a woman publisher this time?

While there are some parts of DC’s past I wouldn’t mind seeing restored to their timeline, I’m still concerned about what is called the “5G” retooling of DC. You just can’t keep rebooting every few years. At some point, you have to live with what you’ve created, and do the best you can with it. Don’t make the mistake Marvel made some time back. However, even they realized their mistake and restored the original timeline.

Even though there have been announcements about the upcoming Free Comic Book Day release from DC and other related books, I think the company needs to re-examine this whole event. Just check out last week’s column if you want to read my concerns about all this.

I’m still worried, though, that those of us fans who have invested a lot in DC’s previous decades ought to be wanting DC to succeed in the years ahead more than trying to protect past glories. Do we really want this company to be relegated to the museum of comics history, or do we want them to move forward so they can tell what we hope will be even more “classic” tales? Notice that I included myself in this group. I do believe it’s possible to accomplish both—make the previous tales work with future stories.

I would also like to see DC invest more in younger talent. I’ve often mentioned that many young readers apparently consider Marvel the “cool” comics company, with DC more popular among those of us who are “older,” long-term fans. Maybe if they could focus more on “new” creators, that might help change this perception.

I have to admit, though, that I will miss DiDio’s wonderful laugh and his enthusiasm. Wherever you are, Mr. DiDio, I wish you well and hope we’ll get to check out whatever endeavor you move on to next.

What do you think? Should DC re-examine the Generation event? What else could DC do to help them be more successful in the years ahead? Who should take over the reins of DC now? Please share your thoughts in the space below!