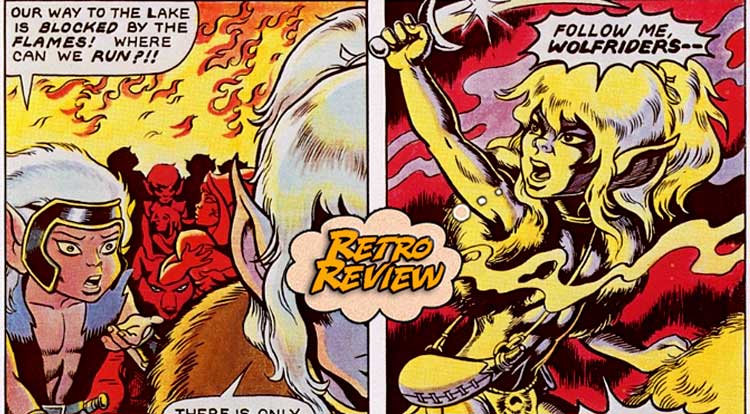 It’s always fascinating to me when a comic is the biggest thing in the world in one decade, and almost completely forgotten in another…  Your Major Spoilers (Retro) Review of Elfquest #1 awaits! Previously in Elfquest: Originally published in the first issue of Fantasy Quarterly circa 1978, the Wolf-Rider elves of Wendy and Richard Pini (the WaRP of WaRP Graphics) are a true independent comics success story.  Indeed, it was the quality (or the lack thereof) of that issue of FQ that led Wendy and Richard to believe that they could do better on their own, borrowing money to create their own publishing company.  Spanning 20 magazine-sized issues, the stories were initially presented in black-and-white, though color reprintings (which, full disclosure, are the ones  I own and the physical copies that are being reviewed) came later.  The response was remarkable, and Elfquest exploded in the early 1980s, for reasons which should be obvious once we get into this issue’s story. Our story begins not with an elf, but with a man, a tribal chieftain who tells the legend of how the “demon-spawn” arrived from somwhere else, a time so distant that words don’t exist for how long ago it was.  (Later stories estimate it as more than 10,000 years.)  He speaks of the night when thunder came and the sky split open, revealing a magical castle whose occupants were… something different.  Naturally, in his telling, his heroic ancestors chased away the demonic scourge, forcing the newly arrived elves to run to the forest for sanctuary. In the now, whatever that may be, of this story, we discover that his tale of the ancient ways is in prepration for the ritual murder of one of the elves, a tracker named Redlance who made the mistake of hunting alone.  Before the followers of Gotara can strike a fatal blow (but NOT before then torture Redlance for literally no reason), the rest of the Wolfrider tribe springs from the forest, led by Cutter, their chieftain.  A hot-blooded young elf, Cutter sweeps in, and not only takes back his warrior, but holds his sword at the human’s throat, threatening to kill him if they every again try to attack his tribe.

That goes badly for him… Even though it will likely mean the end of their human tribe as well, the men burn Cutter’s forest to salve their wounded pride, leading the Wolf-Riders to flee to the only place they can: The nearly tunnels of the trolls.  It’s a dangerous gambit, as their alliance with the trolls is uneasy, and once again, Cutter’s temper gets the best of him.  When the Troll-King slaps away a curious Skywise from their most sacred relic (a chunk of magnetic stone that fell from the sky), Cutter threatens him as well, and even hacks off a hunk of the lodestone for Skywise.  He demands safe passage through the Troll territory, which the king provides, perhaps a little too easily.  As they travel the maze of caverns, we see a little more of the elves ways, and… it’s kind of adorable. It’s a very short scene, one almost hidden in the middle of the forest fire, the fighting and the reveal that ends the issue, but one can easily see why people respond to this story.  Wendy’s art is fascinating, with a range of facial expession that seems unbelievable, all the while keeping in mind the fact that these aren’t human characters.  There’s a level of cartoonishness to the character’s proportions, but they never seem like anything less than living creatures and the amount of depth and character given to even the most minor characters is remarkable.  That makes the trolls inevitable betrayal even more awful. Seemingly at the cost of his own life, the troll Picknose triggers a cave-in at the behest of his king’s damaged pride, leaving Cutter and his surviving elves stranded in a merciless desert with no idea where they are and seemingly no chance of finding a new holt in which to live.  The original 20 magazine-size issues of Elfquest have been reprinted multiple times in ensuing years, including the high-profile Marvel Comics version, but for my money, you can’t beat the Starblaze Graphics collections from the 80s, which keep the larger size so you can enjoy the subtleties of the art.  Elfquest is still around today, with a 40th anniversary cycle having ended in 2018, with the final issue appearing 40 years to the day after this issue’s first appearance and providing closure for some of the characters (though I’m not spoilering any of it.)  Elfquest #1 is that rare perfect first issue, melding wonderful art with meaningful story and creating a world where fans are completely engrossed, even four decades down the line, earning 5 out of 5 stars overall.  Even if you’re not into the swords and sorcery or the high-fantasy setting, these characters will get to you and draw you into the story being told, and that’s an amazing achievement.

Incredible art, deep characters, fascinating dialogue and almost effortless world-building make this one a keeper. I'm not a big Elfquest fan, but you cannot deny the quality and care that goes into this story.