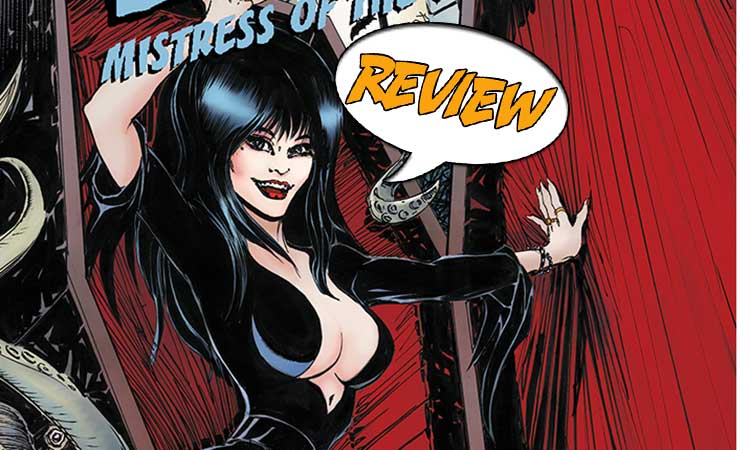 Elvira Mistress of the Dark #12 Review

Elvira is kidnapped by cultists who summon…Vlad Tepes! What does Elvira have to do to get rid of him THIS time? Find out in Elvira, Mistress of the Dark #12 from Dynamite Entertainment! ELVIRA, MISTRESS OF THE DARK #12

Previously in Elvira, Mistress of the Dark: Elvira has bounced around through time and made her way through Hell and back – literally. She finally returns home only to be kidnapped by cultists. They have a fiendish plot that involves using a Besom to tap into her “Luciferian Energy” and drain her of her Dark. All this to summon a demon, who turns out to be none other than Vlad. Along the way, she has met a cult-busting superhero known as “The Soul Survivor,” and together they’re trying to save the day!

No one is more surprised than the head Deucalionid that he actually summoned a demon as Elvira, Mistress of the Dark #12 opens. If anything, Elvira is not too surprised because this demon is her arch-enemy Vlad Tepes, for which she promptly blames the writer. Vlad makes a grand entrance, and the Master of the Deucalionids says they’re ready to follow him as he conquers the world. That sounds pretty good, but the gathered cultists don’t look like much of an army and Vlad says as much, commenting that one of the only people who looks like a warrior is “the Moor.” This raises the eyebrow of the Soul Survivor, and Elvira tells him who Vlad is.

Then Vlad notices Elvira and they verbally fence a bit with a recap reference to Faust, who set the whole ball rolling. Vlad asks if she and “the Moor” are with the cultists, and as Elvira swears they’re with Vlad, the Soul Survivor understandably starts getting cranky about being called a Moor. Elvira touches Vlad, and a little of her darkness comes back.

Meanwhile the cultists gather round and Vlad is not impressed, so much so that he decides to feast on the cultists. Elvira and the Soul Survivor enlist the help of Fred, a guy in armor, to help fight Vlad, and we launch into the fight. There’s some chatting as the Soul Survivor has a catch phrase, which Elvira notes, along with commenting that the writer has not let her use her own phrase. Vlad carries Elvira off, but this lets her keep in physical contact with him and draw back her own darkness. This saps his power and Elvira saves the day, although the cultists’ lair (a medieval-themed family dinner theater) burns to the ground.

In a cute epilogue, Elvira settles back in at home when the doorbell rings and a Black stranger, who says the Soul Survivor sent him (of course), shows up with cookies – he’s a multi-millionaire cookie mogul.  Elvira recognizes him, as we all do, and he tries to keep hold of his secret identity to no avail. But fun as it’s been, Elvira does not want to be a crime-fighting crusader. And then the fourth wall gets good and broken, because the creative team, well, let’s just say it’s almost like they’re all in the same room.

It’s goofy, it’s quick-witted, and it’s fun. I like that they’ve taken a wild rambling story, let it fly all over the place, and then reined it in slowly to wrap everything up tidily with the door open just wide enough that there would be room for another adventure, if enough readers are so inclined.

A BIT OF CRAZY, BUT IN A GOOD WAY

Elvira, Mistress of the Dark #12 is a light-hearted romp, and the art strikes a balance between representing the characters faithfully and having fun with them. The Soul Survivor is totally a ‘90’s superhero, from his armored costume to his belt full of pouches. Vlad is bigger and badder than ever. Now that he’s a demon, he’s green and has horns. I think his costume sports new spiky bit as well. But the cultists are the most fun. They’re just a bunch of guys, you know, all different shapes and sizes, all looking equally silly in their black robes, red capes, and witch-style hats.

The dinner theater setting is terrific for the final battle. Vlad sets it on fire, so there’s some great color for the background. Elvira’s dress represents her darkness. (It is odd to see her in all white.) As she regains her darkness, her dress slowly shifts back to full black. The Besom is full of magical energy, so there is also some lovely crackly blue. And poor Vlad meets his end with great drama.

BOTTOM LINE: A HECK OF A GOOD TIME

Elvira, Mistress of the Dark #12 is a satisfying conclusion to the story. The series has, for the most part, kept up on the energy and the humor throughout with just a few ups and downs. I think in this issue, everything works together well and captures the spirit of Elvira.

Elvira Mistress of the Dark #12