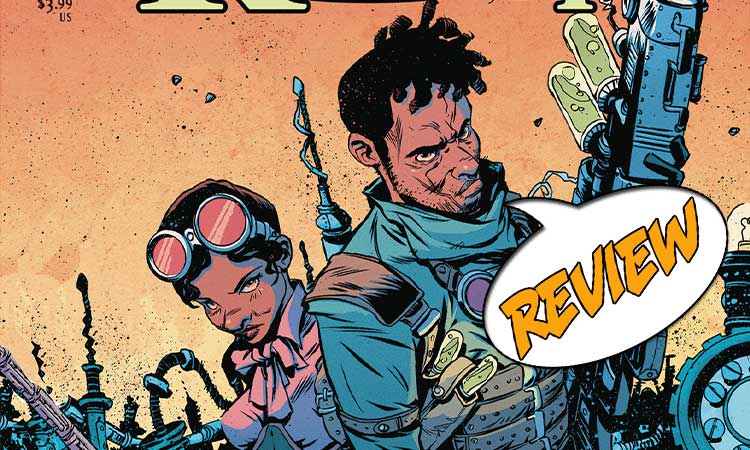 Earth is not threatened by Jinoo alone – portals allow demons to slip through too. Can the Sangeryes find some allies, or are they fighting this alone? Find out in Bitter Root #6 from Image Comics! Previously in Bitter Root: The Sangeryes are one of the greatest monster hunting families of all time. In the 1920’s, though, there is a surge of Jinoo, creatures that originate from humans consumed by hatred. But the Sangeryes are divided – some work to cure the Jinoo; others wish to destroy them. They must work together to confront a new threat, a new kind of monster which has its origins in grief and trauma.

Back in Harlem, as the Sangeryes try to catch another batch of Jinoo, Dr. Sylvester sneaks away. He can assume a monstrous form, but he is not a Jinoo. He is wounded and seems to be changing back to his human self, when a monstrous female approaches him. It is Miss Knightsdale, formerly his partner and able to become a monster, most recently dead. But now she is here and offers to help him under the new name…of Adro.

Ma Etta is busy mixing roots and talking with Nora. Blink takes after her mother – they’re fighters, not content to do the traditional woman’s work of mixing the roots. But Etta didn’t just want her around for help. She’s returned from Barzakh, which is unheard of, and Etta needed to see if her soul was still pure, which it is. But what about Cullen’s?

The world gets a little bigger as the next scene is a meeting Enoch has called bringing in representatives of other families from the city – of Irish, Chinese, and Indian backgrounds. They’re all trying to protect people, but they aren’t always on common terms. I love this; it is so interesting and complicated. Cullen is trying to bring them all together, but the Sangeryes have a reputation for recklessness that has driven a deep wedge between them and the others.

Berg, Ford, and Blink continue to fight Jinoo. Berg continues with his wonderful speaking style where he doesn’t use a small word if a long word would be more appropriate. This plays off Ford, who freely admits he doesn’t understand a word he’s saying. After the fight, the monster part of Berg starts coming to the fore as he tries to hold it off. They head back home.

Things get dark, folks. Adro takes Dr. Sylvester to Georgia where they go to the site of a lynching. The victim – a boy. Adro brought him here to remind him of his pain at the death of his children, and to see, firsthand, the pain of the whole Black community here, the heartbreak, the helplessness, the grief. And Adro promises them peace. (But at what cost?) This scene cuts like a knife.

The characters in Bitter Root #6 are vividly portrayed. We see in Nora’s face, in her eyes, traces of the battles she’s been through in Barzakh. And Cullen has changed. He’s grown up; his face is scarred, his eyes determined. And never does the art lose sight of how close this family is. They’ve had a lot of losses, though. The book opens with a family tree so we can finally see how everyone is related, and this shows us how many of Enoch’s brothers and sisters are now gone.

The action scenes are big and bold with a slightly exaggerated perspective that makes them practically pop off the page. Blink really shines here, and there’s a whole dynamic page devoted to her fighting a variety of horrific monsters or demons. She earns Ford’s respect, and we see him in action too, as well as Berg, whose fight is notable for the gradual shift he undergoes as the monster within him starts winning out.

Bitter Root #6 is exciting and doesn’t flinch at pulling from the trauma each character has experienced to challenge them. The metaphors of the story such as family sticking by each other when things get tough, and how hatred takes on a horrific life of its own are timely and meaningful.

The biggest incursion of Jinoo in ages, and the Sangeryes may be fighting it alone.