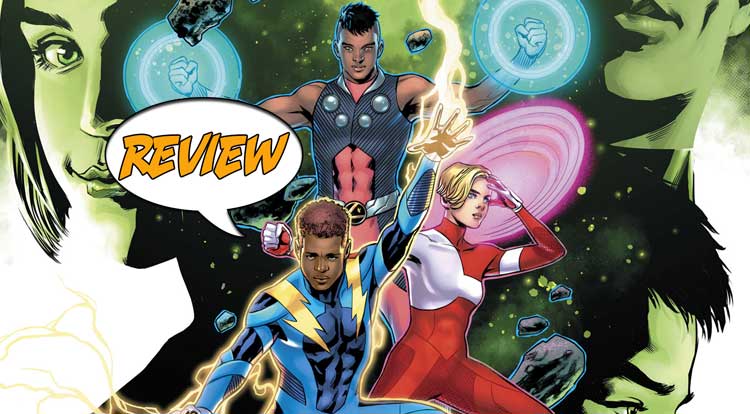 The Secret Origin of the Legion revealed! Your Major Spoilers review of Legion of Super-Heroes #4 from DC Comics awaits! IS IT REALLY A SECRET IF IT’S THE SAME?

This issue opens with narration by Triplicate Girl, who wants us to know that she’s a single person and not separate entities (and that her traditional crush on Superboy is still in play, even if it’s a different Triplicate Girl and a different Superboy.) Elsewhere on New Earth, LIghtning Lad and Cosmic Boy finally get Superboy into the orientation program, which turns out to be a fully-immersive point-of-view presentation run by… COMPUTO? We see, through her own eyes, Imra/Saturn Girl leaving the collection hive mind of Titan, followed by a story focusing on firebrand Ayla Ranzz and her less-decisive brother Garth, and the interruption of Rokk /Cosmic Boy’s preparations for the Inter-Galactic Olympics. Gathered together by the President of the United Planets, R.J. Brande, they are all set to be the core of a Young United Planets… but Brande is worried that she should be doing more. Before she can fully articulate her concerns, though, the wall is blown open by an attack by The Horraz, with the three young superhumans leaping into action to protect her!

Before Superboy can view what happens next, he is pulled from the simulation to deal with the crisis set up during last issue: Aquaman’s trident has gone missing, the Legion has created an intergalactic incident and everything is (metaphorically, for the moment) on fire. And now, they’re looking to Jon Kent for guidance?

First and foremost, I am officially over the “you need to finish the orientation” running gag, as it ends up being the stinger for this issue cliffhanger, and it has officially become annoying. That said, this issue gives us much more background than we’ve gotten thus far in the book, with interesting changes to the Ranzz family, Titan, much of the United Planets backstory and R.J. Brande herself. Since the pre-Crisis Brande was actually a shape-shifter, albeit a depowered one, I’m fine with that change and waiting for a reveal that may never come. Indeed, that’s most of my reaction to this issue, with Computo, with Triplicate Girl’s crush, with the founding Legionnaires coming together… All of it becomes a “What’s different in this iteration?” game, something that wasn’t as prevalent in the first three issue of the book. Sook and Janin’s art is credited as though they each did separate portions of the book, but I’m unable to see any of the transition points, which is lovely, and the art is always crisp and exciting. The facial expressions are top-notch (Rokk greeting his Magnoball fans is wonderful, as are the varied expressions of Garth and Ayla as they argue with their mothers about a clash with the Science Police and the invitation to the Young United Planets organization) and the brief action sequence is also really well done.

BOTTOM LINE: ANOTHER TEASE, ANOTHER CLIFFHANGER

I haven’t translated any of the Interlac yet, which means I may have missed some subtle easter eggs here and there, but Legion of Super-Heroes #4 is a mixed bag across the board: Strong art that is mostly flashbacks, number of important reveals interrupted by yet another orientation gag, and a lot of Legion lore that almost ends up being a distraction, resulting in 3 out of 5 stars overall. I am still enjoying the book and I am quite glad that we are starting to see answers and larger glimpses of this universe, I’m just a little bothered that we’ve now had three issues that keep throwing logs on a very large fire, followed by a WHOLE ISSUE that’s all flashbacks and exposition, with the implication that we’re going to be back to breakneck pace next time. It’s frustrating to read, even though much of what’s being revealed is interesting material.

We are officially past the point where the Orientation gag is any fun, but there's a lot of information and interesting world-building to be had in these pages, even if the pacing/presentation isn't to my liking.