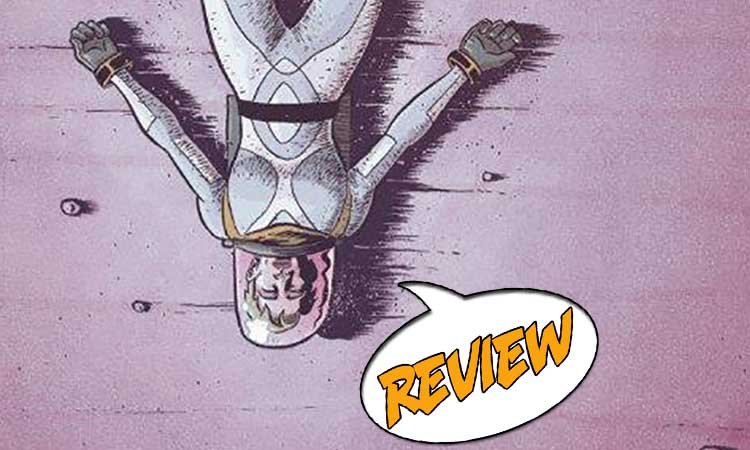 Stranded on an alien planet far away from Earth, Helen Sterling must find a way to make it back to her homeworld, if she could only remember exactly who she is and why she’s where she is. Your Major Spoilers review of Canopus #1 from Scout Comics awaits! Previously in Canopus: Helen wakes up marooned on a lifeless alien planet 300 light years from Earth with no memories beyond a hazy sense of extinction-level urgency to return to Earth. Joined by Arther, her strange robot companion, she explores the planet to find materials necessary to repair her ship.

Canopus #1 opens up with Helen snapping awake and quickly learning she’s stranded on an alien world orbiting the star Canopus.  She discovers that she needs to reach a mineral deposit 10 miles away if she has any hopes of making it home.  She’s introduced to Arther, a robotic companion who claims she is his mother. The pair set off to find the deposit.  Along the way Arther discovers a pit filled with stuffed animals and toys.  Helen looks and is shocked to see one she recognizes.  Helen then goes through a flashback where she remembers that her father was an astronaut who was part of a doomed mission to Mars, leaving her and her mother alone.  When she snaps out of it, the toys merge into one giant toy and Helen destroys it. The pair move on with Arther asking Helen a lot of questions, which she can’t answer.  They come across what looks like a man made structure built into a canyon.  A flood of flying sets of teeth descend on her and Arther.  Helen has another flashback where she sees an old man she was a friend to when she was a teenager. During the flashback her friend teaches her about trees and how their roots work.  Helen later finds him dead, his dentures laying on the floor. After the flashback, Helen’s suit tells her to run into a house that has appeared, in order to stay on the path to the minerals.

Amnesia, psychosis, isolation, possible hallucinations, none of these are particularly new to the sci-fi genre, especially with movies like Moon, Sunrise, and Solaris out there. That doesn’t mean that Canopus #1 isn’t without value.  There’s some good stuff going on here, specifically with how the flashbacks are presented.  The panels and dialog during these moments are scattered across the pages in a disorganized manner that is evocative of what memories feel like. Also, the way these memories manifest themselves in the current time are interesting and blurs the line between reality and metaphor.  There are some bits that feel a little too cliche, like the amnesia aspect and a fully conscious robot friend, and to make it worse, the book itself explicitly states these things as being cliche.  What stands out to me though with this issue, is that unlike a lot of stories similar to this, the personal journey isn’t hidden and subtly revealed as a different task is tackled.  Instead, her main mission is the thing that is the most mysterious and dependent on her adventuring through her personal issues.

Bottom Line:  Looking Forward To Seeing This One Play Out

Even with some of the cliches floating around with Canopus #1, the hooks are good enough and have sunk deep enough to make this a series worth seeing more of.  There’s enough mysteries here that are interesting enough to make the played out set dressing not seem so bad.  Also, the more personal approach is an intriguing take on this genre. 3.5 out of 5 stars

Some of the setup in Canopus #1 will come off as familiar and even well-tread. The parts in this issue that are unique though, make up for those cliched aspects.